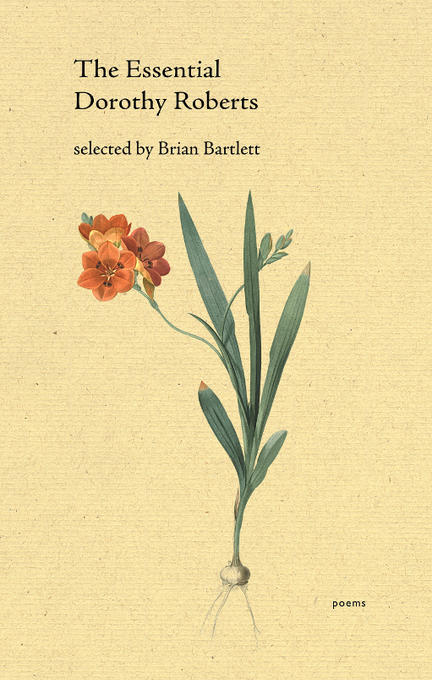 Brimming with powerful imagery and quiet but strong emotion, The Essential Dorothy Roberts gathers together a selection of the best poems from Fredericton-born poet Dorothy Roberts's six-decades-long career.

Dorothy Roberts (1906-1993) was born in Fredericton, New Brunswick. Despite an itinerant childhood and an adult life spent primarily in the United States, her poetry remained rooted in her native land. The daughter of Theodore Goodridge Roberts and niece of Charles G. D. Roberts, she was encouraged by her family early on to write poetry. When she was twenty-one her first poetry chapbook, Songs for Swift Feet, was published under the pen name Gostwick Roberts. After years of raising a family and publishing short stories, she went on to write six more volumes of poetry, often featuring themes of nature, memory and the passage of time, with an emphasis on feelings of alienation and exile from her native land. Roberts died in Pennsylvania, her home for several decades, but was buried in Fredericton near the river she had loved since childhood.

As a high-school student, Brian Bartlett was invited to join the Ice House Gang, so-called because they met in the University of New Brunswick's historic Ice House every Tuesday night to read their poetry and hone their talents. Amazed and delighted by Bartlett's gift for words, Robert Gibbs, Bill Bauer, Kent Thompson, and Alden Nowlan inspired him to become the accomplished artist he is today. He published his chapbook Finches for the Wake when he was only 18 years old. The next year, Brother's Insomnia was published as a New Brunswick Chapbook. Since this apprenticeship period, Bartlett has published six highly acclaimed collections: Cattail Week, Planet Harbor, Underwater Carpentry, Granite Erratics, The Afterlife of Trees, and Wanting the Day. His poetry has won Two Malahat Review Long Poem prizes, a fellowship to the Hawthornden Castle International Writers' Retreat in Scotland, and first prize in the 2000 Petra Kenney poetry awards. A talented writer of prose, Bartlett's essays, stories, and reviews have appeared in Books in Canada, Canadian Literature, The Fiddlehead, and Brick, as well as Best Canadian Stories and The Journey Prize Anthology. A native of Fredericton, New Brunswick, Bartlett spent 15 years in Montreal, studying at McGill and teaching at Concordia. Today, he teaches creative writing and literature at Saint Mary's University in Halifax.

The woods suggested it, the forest of urges,
And we undressed and walked among the leaves
To let the skin release its impulses
In little starts and pleasures lighter than real.

The delicate touch of woods checking the current
Between the flesh and world was most to be trusted
Of all the possible ways of coming to be
More than the personal triumph of the child.

Leaves, fronds, stones, mosses, brooks, tendrils and flowers,
I thank you for the delicacy of those hours
Letting the impulse out, the shower in
Of quick cool contact and the bars of sunlight.

Into the forest vanishing for persuasion
We found the dusky place and golden haven
Fern wand and cedar bough gradually gave-
Still is all lover's touch partly of leaves.

From a River Boat

This is an excellent entry into the work of a respected poet.

The Essential Dorothy Roberts is a subtle and graceful poetry collection.

Roberts, who died in 1993, came from a family of poets and was encouraged to follow in their footsteps. Her own poems were originally published across a wide span of time, ranging from her first chapbook in 1927 to her final collection, In the Flight of Stars, from 1991. The Essential Dorothy Roberts is the first twenty-first-century publication to collect her work.

Roberts's poetry may at first seem staid or old-fashioned; her imagery is more plainly stated than that of many modern poets. Her poems' quality, however, is unquestionable. They turn an insightful gaze on a myriad of topics, their messages often revealing themselves fully only after careful consideration, like complex visions coalescing out of a seemingly bare background.

Editor Brian Bartlett's foreword outlines the common themes of Roberts's work. Hers is, he says, 'poetry of exile' (Roberts lived much of her life in the US after her childhood in New Brunswick). Nature, people, and the home are observed with a sense of distance and nostalgia, as removed as impartial observations at times, but with an unmistakable undercurrent of passion. Explosions of passion are rare; reserved, slow builds toward emotion are no less impactful. Formality and repetition are used as highly effective tools:

She was lost in the wood because a few leaves fell,
They fell and changed the pattern of the wood,

'[Roberts] found in our developing awareness of science and in our growing awareness of the construction and inter-relationships of the universe her own subject: natural process, change, the relationships between the microscopic and the astronomic, the flow of life. She wrote at a time when we found ourselves able to look deeper, think further. She is our poet of our new sense of the hugeness of the universe, and her best poems are still astonishing, like no other's.'

'In The Essential Dorothy Roberts, a svelte volume designed to champion ''[t]his undervalued poet,'' Brian Bartlett collects forty-eight of Roberts' poems (7).... The Essential Dorothy Roberts has convinced me to add two or three of her poems to the reading list when I teach modern Canadian poetry-''Dazzle,'' perhaps, and ''Outburst of May,'' with its vivid representation of spring and seasonal change: ''May is the truth. To dampen down explosion / Autumn will have to come, the chilling fall / Of spent particulars before another tension'' (12).'

Other titles by Dorothy Roberts

In the Flight of Stars

The Self of Loss

Other titles by Brian Bartlett

All Manner of Tackle