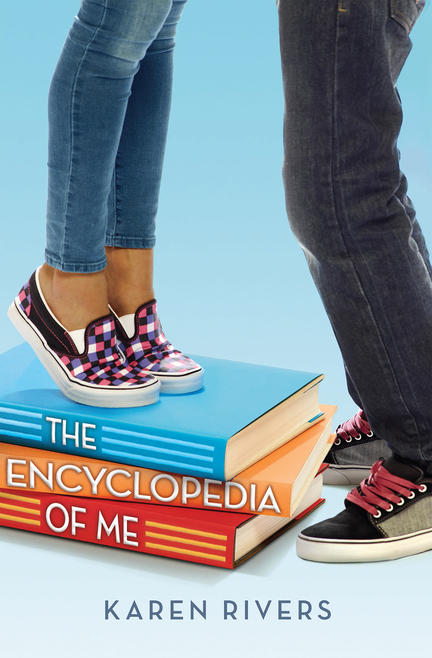 Tink Aaron-Martin has been grounded AGAIN after an adventure with her best friend Freddie Blue Anderson. To make the time pass, she decides to write an encyclopedia of her life from "Aa" (a kind of lava--okay, she cribbed that from the real encyclopedia) to "Zoo" (she's never been to one, but her brothers belong there).

As the alphabet unfolds, so does the story of Tink's summer: more adventures with Freddie Blue (and more experiences in being grounded); how her family was featured in a magazine about "Living with Autism," thanks to her older brother Seb--and what happened after Seb fell apart; her growing friendship, and maybe more, with Kai, a skateboarder who made her swoon (sort of). And her own sense that maybe she belongs not under "H" for "Hideous," or "I" for "Invisible," but "O" for "Okay."

Written entirely in Tink's hilarious encyclopedia entries, The Encyclopedia of Me is both a witty trick and a reading treat for anyone who loves terrific middle-grade novels.

Karen Rivers is the author of numerous novels, mostly for young adults. Her books have been nominated for a number of awards, including the Sheila A. Egoff Children's Literature Prize and the Silver Birch Award. Karen has a BA in International Relations, which makes her an asset on any trivia team that emphasizes global politics in the late 1980s or early 1990s. As a lifelong hypochondriac, she once thought she'd be a doctor but realizes now that writing is a much more sensible career choice as it allows enough time to research symptoms on Google without having to actually go to medical school. Karen lives, reads and writes in a yellow house near the beach in Victoria, British Columbia, and can almost always be found online at www.karenrivers.com.

The Encyclopedia of Me

“This is not a regular encyclopedia. It’s better.” So says Tink Aaron-Martin, the nearly 13-year-old, and almost constantly grounded protagonist of this book (which does, in many ways, live up to Tink’s bold assertion). Readers are introduced to Tink and her varied assortment of friends and family members in a unique fashion: through a series of encyclopedia entries that take us on an alphabetical journey through her life. In this way, she describes her changing relationship with her BFF, Freddie Blue Anderson, her chaotic household with her two older brothers Lex and Seb and how Seb’s autism affects the entire family, her discovery of a new-found interest in skateboarding and her crazy, mixed-up feelings about the new boy who moved in next door. As Tink’s encyclopedia takes shape, we follow her as she embarks on a summer of often zany adventures accompanied by surprising realizations and a healthy dose of self-discovery.

This is a warm and witty account of the trials and tribulations of growing up. The format of the novel is clever and entertaining, if a little meandering at times. It is comedic and laugh-out-loud funny in parts while also managing to be astute and candid in its observations. Tink is an irresistible protagonist, and Rivers has perfectly captured her voice and all of the anxiety and tumultuousness of being 12-almost-13. Although the encyclopedia format occasionally causes the plot to lag, Tink’s feisty character and humorous narration will keep readers hooked until “Zoo,” the final entry in this delightful book.

Other titles by Karen Rivers

You Are The Everything

A Possibility of Whales

Before We Go Extinct

The Girl in the Well Is Me