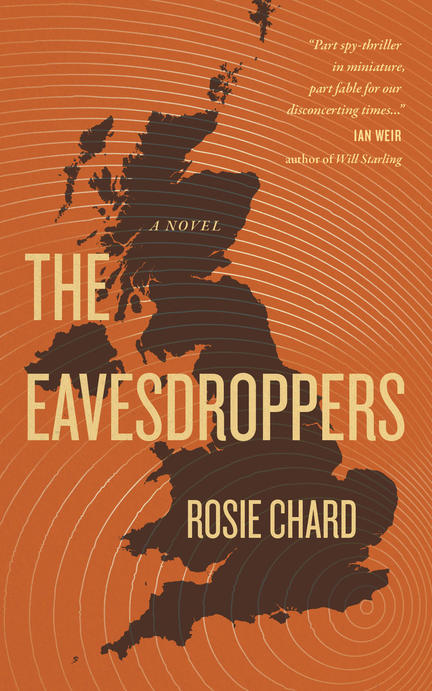 When social attitudes researcher Bill Harcourt puts an advertisement in the newspaper for ‘listeners’ to work on an unconventional project, he anticipates that his team of eavesdroppers will discover previously untapped insights into public opinion.

But as five eager listeners begin eavesdropping in the cafes, dentist waiting rooms, public toilets, tube trains and launderettes of London, discreetly noting the details of unguarded conversations, Bill starts to notice subtle changes in their behaviour and realises he has underestimated the compulsive nature of his group. His anxiety is compounded after he receives a series of anonymous letters warning him of the dangers of his experiment.

As the group becomes increasingly intertwined in their subjects’ lives, eavesdropping descends into obsession and Bill has to find a way to rein in his increasingly unruly team before they are beyond help.

Informed by conversations collected over three years, The Eavesdroppers, by award-winning author Rosie Chard, is a dark, yet wryly humorous tale of present-day Londoners, living in a constant state of noise and crowds and eavesdroppers.

Praise for The Eavesdroppers:
"A creepy ambush of a novel, unsettling and profound in its ideas and fears. One feels the weight of history and of the future; one hears a warning.”
~ Michelle Butler Hallett, author of This Marlowe
“At an address somewhere between Bletchley Park and Franz Kafka’s house, Rosie Chard locates a curious and compelling tale about a group of life’s outsiders who find meaning – and much worse – when they’re tasked with listening in. Part spy-thriller in miniature, part fable for our disconcerting times, The Eavesdroppers is funny and haunting and achingly human.”
~ Ian Weir, author of Will Starling and The Death and Life of Strother Purcell
"The third novel from Rosie Chard is a potent but entertaining commentary on our modern surveillance society."
~ Quill & Quire

>p>Rosie Chard grew up on the edge of the North Downs, a range of low hills south of London, UK. After studying Anthropology and Environmental Biology she went on to qualify as a landscape architect at the University of Greenwich and practiced for several years in England, Denmark and Canada. She and her family emigrated to Winnipeg in 2005 where she qualified as an English Language teacher at the University of Manitoba. She is now based in Brighton, England where she currently works as a freelance editor and language teacher. Her first novel, Seal Intestine Raincoat, was published in 2009 by NeWest Press; winning the 2010 Trade Fiction Book Award at the Alberta Book Publishing Awards, and receiving an honourable mention for the Sunburst Fiction Award. She was also shortlisted in 2010 for the John Hirsch Award for Most Promising Manitoba Writer. Her second novel, The Insistent Garden, won the 2014 Margaret Laurence Prize for Fiction at the Manitoba Book Awards.

Other titles by Rosie Chard