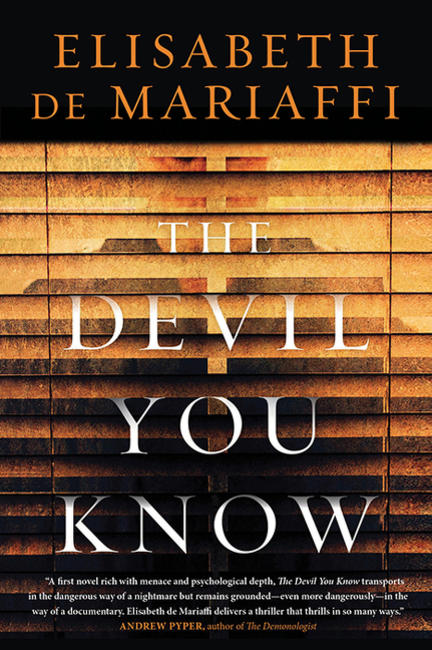 In the vein of Gillian Flynn's Sharp Objects and Alice Sebold's The Lovely Bones, The Devil You Know is a thrilling debut novel about a rookie reporter whose memories of the murder of her childhood best friend bring danger-and a stalker-right to her doorstep.

The year is 1993. First-year reporter Evie Jones is haunted by the unsolved 1982 murder of her best friend, Lianne Gagnon, back when the girls were both eleven. The suspected killer, a repeat offender named Robert Cameron, was never apprehended. Now twenty-two and living alone for the first time, Evie is obsessively drawn to researching the real story of who killed Lianne. She leans on childhood friend David Patton for help, but every clue they uncover seems to lead to an unimaginable conclusion. As she gets closer and closer to the truth, Evie becomes convinced that the killer is still at large-and that he's coming back for her.

In the wake of Paul Bernardo's arrest for a double murder, and a case of identity theft that seems to point to Robert Cameron himself, Evie is stalked by a strange man who stands out on her fire escape night after night, watching her every move. Has her anxiety simply taken over? Or can Evie somehow be drawing the killer closer to herself? Only a harrowing last visit to see David's father, Graham, provides the answer Evie has been so desperate to find-the trail that leads from Patton to Cameron to eleven-year-old Lianne, and ultimately to Evie herself.

ELISABETH DE MARIAFFI’s debut book of short stories, How to Get Along with Women, was longlisted for the 2013 Scotiabank Giller Prize. Her poetry and short fiction have been widely published in magazines across Canada. Her first novel, The Devil You Know, was named one of the Best Books of 2015 by the Globe and Mail and the National Post. The Globe and Mail also chose her most recent novel, Hysteria, as one of the Best Books of 2018. Both books were shortlisted for the Thomas Raddall Atlantic Fiction Award. Elisabeth de Mariaffi lives in St. John’s, Newfoundland, with the poet George Murray and their four children.

“With so many thrillers cheaply exploiting violence against girls and women, de Mariaffi’s treatment of the topic, through Evie’s vulnerable yet empowered voice, is refreshingly reverent.”

“The Devil You Know explores the tangled emotional and ideological roots of violence against women with subtlety and humour. More impressively, it does so while delivering the suspense and narrative pace of a good thriller.”

“A compelling study of the landscape of fear. . . . A skilled writer, de Mariaffi effectively evokes the lingering effects of trauma, the hyper-vigilance it spawns and the vulnerability that terror triggers.”

Other titles by Elisabeth de Mariaffi

How to Get Along With Women

Literary characters who refuse to give up.