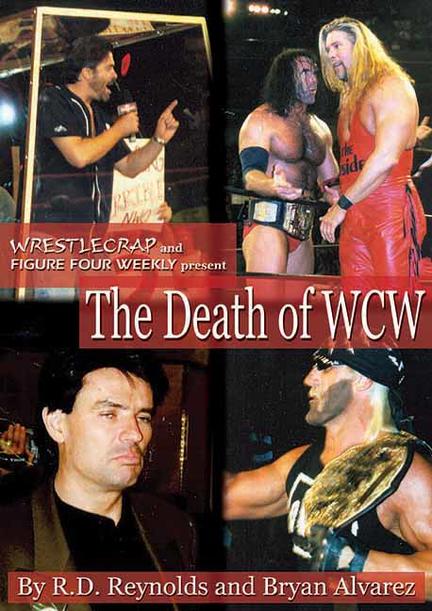 This detailed tell-all of the demise of the former top pro wrestling company World Championship Wrestling explores the colorful personalities and flawed business decisions behind how WCW went from being the highest-rated show on cable television in 1997 to a laughable series that lost 95 percent of its paying audience by 2001. Behind-the-scenes exclusive interviews, rare photographs, and probing questions illustrate with humor and candor how greed, egotism, and bad business shattered the thriving enterprise. Wrestling fans will devour the true story of this fallen empire, which in its heyday spawned superstars such as Sting, Bill Goldberg, and the New World Order.

R. D. Reynolds is the author of WrestleCrap: The Very Worst of Pro Wrestling and the creator of WrestleCrap.com. He lives in Indianapolis, Indiana. Bryan Alvarez is the editor of the Figure Four Weekly newsletter, which has covered pro wrestling and mixed martial arts since 1995. He is a writer for WrestlingObserver.com, cohost of the Wrestling Observer Live radio show on Sports Byline USA, and former columnist for Penthouse. He is an independent pro wrestler. He lives in Portland, Oregon.

World Championship Wrestling was not supposed to die.

Anyone with even a basic understanding of its inner workings knew this to be true. As the company began to hit its peak around 1997, all signs indicated that WCW was destined to thrive and prosper. The promotion had so many unfair advantages, it seemed that not only would it continue to expand its profits, but it would also eventually turn every other wrestling promotion in the country into dust.

And why wouldn’t it?

More importantly, how couldn’t it?

The promotion had the single greatest array of talent the wrestling world had ever known. The two men who defined professional wrestling in the 1980s, Hulk Hogan and Ric Flair, both made their home in WCW. The most popular wrestlers of the 1990s, including Sting and Bret Hart, com¬peted in WCW rings, as did Scott Hall and Kevin Nash, who revolutionized the business as the Outsiders, and shortly thereafter formed the nucleus of the infamous New World Order. The company had the most talented in–ring workers: men like Chris Benoit, Eddy Guerrero, and Dean Malenko, as well as the greatest high–flyers from around the world — Rey Mysterio Jr., Juventud Guerrera, and countless others. And, perhaps above all, WCW also employed the man who would lead the industry into the next millennium, the man fans flocked to arenas to see: Bill Goldberg. Such a roster of talent had never been seen in a single pro–wrestling promotion before.

When their flagship show WCW Monday Nitro was created, many older fans returned to watch the stars they’d grown up on, creating the largest wrestling Audience the cable industry had ever seen. WCW was in a place no company had been since Vince McMahon took the World Wrestling Federation national in the mid–1980s: that is, poised to kill the WWF once and for all. Many wrestlers were eager to jump ship to WCW, some looking to increase their paydays, others out of fear that the WWF wasn’t long for this world. Essentially, they were looking to survive.

WCW was looking beyond that. Nitro had surpassed not only Raw in the ratings, but every other program on cable television. They weren’t just the number–one wrestling show; they were the number–one cable show, period. Every week, Nitro presented three hours of live action, featuring cutting–edge story lines, amazing matches, and Production values the likes of which the wrestling world had never seen before. In addition to the sky–rocketing ratings, WCW was one of the biggest and most profitable touring groups in the country, as fans swarmed to arenas for live Nitros and for the monthly megashows. Fans who couldn’t attend the matches live ordered in record numbers via the miracle of pay–per–view, spending upwards of $30 a month just to watch the special events. And let’s not forget the insane amounts of merchandise sold, from T–shirts to posters to magazines to bandanas to wrestling teddy bears to key chains to beanie babies to sipper cups to every stupid tchotchke piece of crap imaginable — all with the WCW logo slapped right on it.

Everything was making the company money, to the tune of more than a $55 million profit in a single year.

So let’s restate once more, for the record, that WCW was not supposed to die.

In fact, not only was WCW never supposed to vanish from the face of the Earth, but the mere thought that the company could ever perish was laughable.

As impressive as it was that the company could trace its roots back “nearly to the days of Abraham Lincoln,” more impressive was the fact that it was owned by the biggest media mogul in the entire universe, Ted Turner — the real reason why the company could not, would not, die. There was simply too damn much money behind it. Turner had purchased the company in the late 1980s almost as a toy, a hobby, and, if truth be told, he wasn’t greatly concerned if the thing ever made a dime. Anything it lost was just pocket change, and anything it made likely was as well. But since wrestling had been a cornerstone of the Turner networks since the launch of the Superstation, he pledged to keep it around, no matter what.

So he had their shows airing on his networks, TBS and TNT, and in prime viewing hours: Monday nights, Wednesday nights, Saturday nights, and Sunday nights. Think about that: in any given week, more often than not, WCW was being featured on the Turner networks during prime time. If another timeslot was needed for a new show, or perhaps a bimonthly special, Uncle Ted was just a phone call away. Backed with the power of the Turner networks, promotion of the pay–per–view events was nothing short of grandiose.

How on Earth could anyone imagine that World Championship Wrestling might die?

"The exhilaration created by the dueling companies comes alive on the pages."  Wrestling Observer Newlsetter

"A must-read for fans who want to be taken behind the scenes."  New York Daily News

"A history book that anyone who has an interest in professional wrestling should read."  epinions.com

Other titles by R.D. Reynolds

10th Anniversary Edition of the Bestselling Classic — Revised and Expanded

The WrestleCrap Book of Lists!

The Very Worst of Professional Wrestling

Other titles by Bryan Alvarez

10th Anniversary Edition of the Bestselling Classic — Revised and Expanded