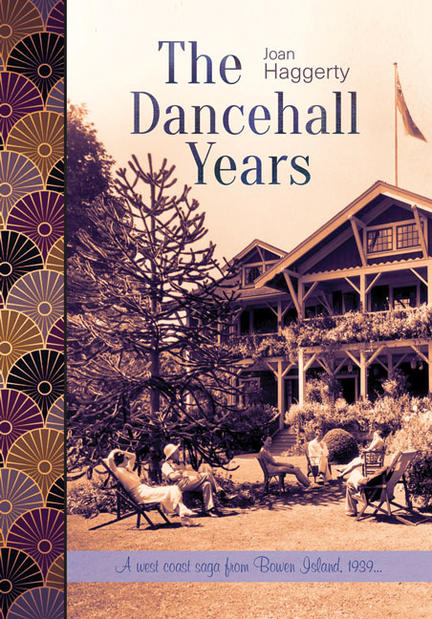 “Joan Haggerty (Daughters of the Moon) is such a strong writer… She’ll be read with appreciation for her talent.” –John Irving

"With the splendid flexibility of her narrating voice and empathetic heart, Joan Haggerty has conjured up a richly textured world in order to explore the dreams, heartbreaks, adventures, and surprises of a unique collection of west-coasters. A major accomplishment.” –Jack Hodgins, author of Broken Ground

“The Dancehall Years is an elegy to a coastal culture almost lost—island cottages with views of the Union Steamships in Howe Sound, the Japanese gardeners before WWII and the terrible internments, forgotten inlets and logging camps, long summer evenings in the dancehall, with its circle of white Corinthian columns, where ‘you're only allowed to dance inside the columns if you're in love or if you're spectacular dancers.’ Haggerty explores the intricate ecology of families, where memory and love are as tangled and difficult as blackberry canes surrounding the cottages, their histories echoing.” –Theresa Kishkan, author of Patrin

Both an epic adventure and an interracial drama, this spellbinding novel brims with gorgeous writing. The complex family saga begins one summer on Bowen Island and in Vancouver during the Depression and moves through Pearl Harbour, the evacuation of the Japanese and three generations into the 1980s. Gwen Killam is a child whose idyllic island summers are obliterated by the war and consequent dramatically changed behavior of the adults around her. Her swimming teacher, Takumi, disappears along with his parents. The Lower Mainland is in blackout, and Gwen’s beloved Aunt Isabelle painfully realizes she must make an unthinkable sacrifice.

The island’s dance hall, a well-known destination for both soldiers on leave and summer picnickers, becomes the emotional landmark for time passing and time remembered.

Joan Haggerty is the author of Please, Miss, Can I Play God?, Daughters of the Moon, and The Invitation which was nominated for the Governor General’s Award in 1994. Her current novel has been in progress for over twenty years. Born in Vancouver, she has lived in England, Spain, New York City and Roberts Creek and taught high school for many years.

“(Daughters of the Moon)…written with intelligence and skill and a strong, vital female identity.” –Marge Piercy

“It’s exciting to find a book (The Invitation) so moving, sensual and compelling that getting to the end of it is both urgent and dreaded.” –Quill & Quire

On Our Radar: The Summer Edition

Books with buzz all around the Internet and elsewhere.

An excellent stack of summer reads guaranteed to make those long days (and nights!) even better.

Our pick of great new books that celebrate the season.