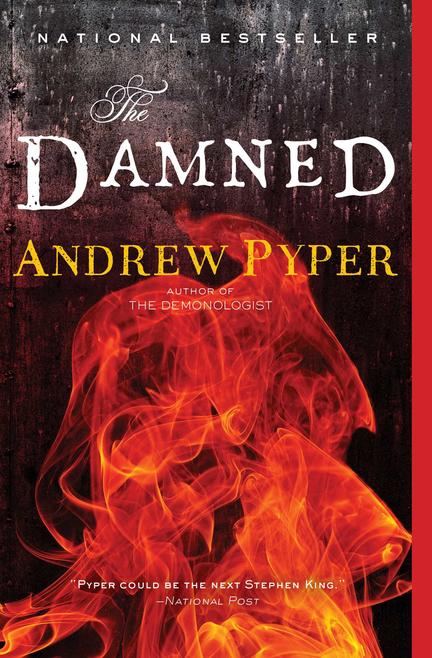 Danny Orchard died on his sixteenth birthday—and so did his twin sister, Ashleigh—but Danny came back. He wrote a bestselling memoir about his experience of Heaven called The After, but despite his fame and fortune he’s never been able to enjoy his second chance at life.

His sister won’t let him.

Charming, magnetic, and manipulative in life, Ash appeared perfect to outsiders but privately terrorized her family, and that didn’t stop her from continuing to terrorize them after her death. She has haunted Danny for twenty years and now, just when he’s met the love of his life and has a chance at a real family, Ash is more determined than ever to keep her brother all to herself.

Danny has been to Heaven. In order to silence his sister once and for all, he’ll have to meet her in a different realm. Which means, he has to die one more time before he can go on living.

ANDREW PYPER is the author of Lost Girls, his highly acclaimed first novel that was a bestseller in Canada, in the Top 10 on the TimesUK paperback list and in the Top 30 of The New York Times paperback bestseller list. The novel was selected as a Notable Book of the Year by The Globe and Mail and The New York Times and is currently being adapted for the screen. His second novel, The Trade Mission, was selected as a Top 10 Best Book of the Year by the Toronto Star and was published in Canada, the US and the UK to great acclaim. Pyper is also theauthor of Kiss Me, a collection of short stories. While researching and writing The Wildfire Season, he spent three of the past five summers living in the Yukon. His home is in Toronto. Visit his website at www.andrewpyper.com.

“In this literate supernatural thriller . . . as in the best horror, Pyper’s keen eye for the quotidian makes the fantastic feel plausible.”
— PUBLISHERS WEEKLY

"Pyper is a master architect of dread...Compulsive and nerve-jangling, The Damned is a story about personal hells and the relationships that haunt us."
— LAUREN BEUKES, author of The Shining Girls and Broken Monsters

"Pyper could be the next Stephen King."
— NATIONAL POST

“The Demonologist and The Damned are stories that evoke the things we imagine are snapping twigs in the dark of the woods, creaking beneath our floorboards, controlling the severed hands of serial killers, and the worlds waiting for us in the beyond. [...] Pyper has worked his prose into a lean, pumping muscle: these books are all crisp sentences and snappy chapters, where one-sentence paragraphs abound — but with staccato bursts of his skilled literary flourishes. […] You’re sped toward wanting to read one more line, page and chapter. It’s the reading equivalent of covering your face from seeing something horrible but peeking through your fingers anyway.”
— NATIONAL POST

“Outstanding in every way.”
— DENNIS LEHANE

"Prepare yourself for a sleepless night or two once you’ve settled in with this smart, suspenseful and absolutely terrifying book that takes the bad seed concept to a whole new level. Pyper has the unique ability to take us to the darkest places and convince us that the things we find there are not only entirely possible and real, but that we might just take some piece of them back with us once we close the cover and turn out the lights."
— JENNIFER MCMAHON, New York Times bestselling author of The Winter People

“It's vintage Pyper, with terrifying imagery, a strong emotional core and a rollicking plot.”
— NOW MAGAZINE

“Pyper is the rare writer who has it all: he’s a poet, a magician, and a seer into the frail human heart.”
— LISA UNGER, bestselling author of Crazy Love You and In the Blood

“It’s an uncommon novel that moves a reader, and a rare one that frightens them, but only the most extraordinary accomplish both at the same time. Enter The Damned, a tour de force that sinks sticky claws into the soft dark places in your psyche—and refuses to let go, no matter how you squirm.”
— MARCUS SAKEY, author of The Blade Itself and The Brilliance Saga

“Pyper has a knack for imbuing the ordinary with palpable and frighteningly plausible horror. . . . [His] pacing, as well as the novel's length, is perfect, and his evocative description of Detroit, a city desolate in its decline, comes off as both sad and poetic at the same time. A treat for fans of intelligent treatments of the supernatural and rock-solid writing.”
— KIRKUS

“Pyper’s latest thriller is a novel that will get your heart racing without insulting your intelligence. . . .The Damned guarantees many sleepless nights.”
— THE GLOBE AND MAIL

“Cleverly, Pyper has created a world in which heaven consists of moments experienced on earth. But so does hell. The Damned is also a classic tale of good twin/evil twin.”
— QUILL & QUIRE

“A master of psychological suspense.”
— LISA GARDNER, New York Times bestselling author of Find Her and Right Behind You

Other titles by Andrew Pyper

1001 Names And Their Meanings