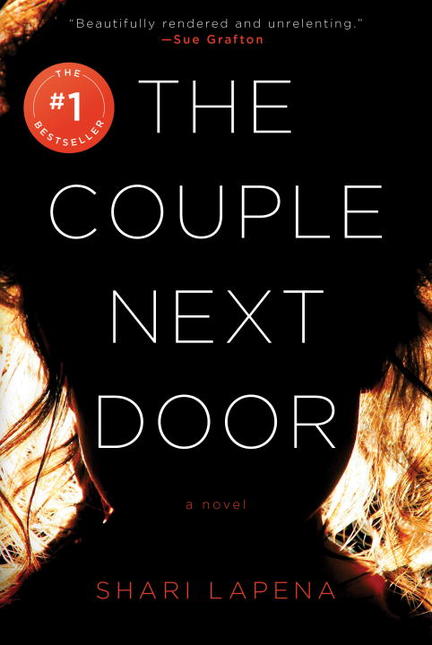 An instant New York Times and Globe and Mail bestseller. Look out for Shari Lapena's next thriller, A Stranger in the House, coming August 2017.
"Meticulously crafted and razor-sharp. The Couple Next Door lingers long after you turn the final page." —Harlan Coben, #1 New York Times bestselling author of Fool Me Once

A domestic suspense debut about a young couple and their apparently friendly neighbors—a twisty, rollercoaster ride of lies, betrayal and the secrets between husbands and wives. . . .
How well do you know the couple next door? Or your husband? Or even—yourself?
Anne and Marco Conti seem to have it all—a loving relationship, a wonderful home and their beautiful baby, Cora. But one night when they are at a dinner party next door, a terrible crime is committed. Suspicion immediately focuses on the parents. But the truth is a much more complicated story.
Inside the curtained house, an unsettling account of what actually happened unfolds. Detective Rasbach knows that the panicked couple is hiding something. Both Anne and Marco soon discover that the other is keeping secrets, secrets they've kept for years.
What follows is the nerve-racking unraveling of a family—a chilling tale of deception, duplicityand unfaithfulness that will keep you breathless until the final shocking twist.

SHARI LAPENA worked as a lawyer and as an English teacher before turning to writing fiction. She has written two award-winning literary novels, and The Couple Next Door is her suspense debut.

Excerpt: The Couple Next Door: A Novel (by (author) Shari Lapena)

Anne reaches clumsily for her cell phone on the dining table and checks the time. It is almost one o’clock in the morning. She’d checked on the baby at midnight. Marco had gone to check on her at twelve thirty. Then he’d gone out for a cigarette on the back patio with Cynthia, while Anne and Graham sat rather awkwardly at the littered dining table, making stilted conversation. She should have gone out to the backyard with them; there might have been a breeze. But she hadn’t, because Graham didn’t like to be around cigarette smoke, and it would have been rude, or at least inconsiderate, to leave Graham there all alone at his own dinner party. So for reasons of propriety, she had stayed. Graham, a WASP like herself, is impeccably polite. Why he married a tart like Cynthia is a mystery. Cynthia and Marco had come back in from the patio a few minutes ago, and Anne desperately wants to leave, even if everyone else is still having fun.

She glances at the baby monitor sitting at the end of the table, its small red light glowing like the tip of a cigarette. The video screen is smashed—she’d dropped it a couple of days ago and Marco hadn’t gotten around to replacing it yet—but the audio is still working. Suddenly she has doubts, feels the wrongness of it all. Who goes to a dinner party next door and leaves her baby alone in the house? What kind of mother does such a thing? She feels the familiar agony set
in—she is not a good mother.

So what if the sitter canceled? They should have brought Cora with them, put her in her portable playpen. But Cynthia had said no children. It was to be an adult evening, for Graham’s birthday. Which is another reason Anne has come to dislike Cynthia, who was once a good friend—Cynthia is not baby-friendly. Who says that a six-month-old baby isn’t welcome at a dinner party? How had Anne ever let Marco persuade her that it was okay? It was irresponsible. She wonders what the other mothers in her moms’ group would think if she ever told them. We left our six-month-old baby home alone and went to a party next door. She imagines all their jaws dropping in shock, the uncomfortable silence. But she will never tell them. She’d be shunned.
She and Marco had argued about it before the party. When the sitter called and canceled, Anne had offered to stay home with the baby—she hadn’t wanted to go to the dinner anyway. But Marco was having none of it.

“You can’t just stay home,” he insisted when they argued about it in their kitchen.

“I’m fine staying home,” she said, her voice lowered. She didn’t want Cynthia to hear them through the shared wall, arguing about going to her party.

“It will be good for you to get out,” Marco countered, lowering his own voice. And then he’d added, “You know what the doctor said.”

"Not only a deliciously addictive whodunit, but a why-did-they-do-it as well." —The Globe and Mail
"The twists come as fast [as] you can turn the pages." —People
"Meticulously crafted and razor-sharp. The Couple Next Door lingers long after you turn the final page." —Harlan Coben, #1 New York Times bestselling author of Fool Me Once

"Provocative and shocking. One crime, an entire neighborhood of suspects, secrets and lies. How well do we ever know those around us? The Couple Next Door will keep you glued to the pages in search of the answer. Even then, you'll never guess the truth . . . until it's too late." —Lisa Gardner, New York Times bestselling author of Find Her

"I read this novel at one sitting, absolutely riveted by the storyline. The suspense was beautifully rendered and unrelenting!" —Sue Grafton, New York Times bestselling author of X
"I thought the read-it-in-one-sitting thing was a cliché. Not any more." —Linwood Barclay, bestselling author of the Promise Falls Trilogy

"Gripped me from the very beginning to the very end!" —Becky Masterman, author of Rage Against the Dying

"Expertly paced and finely crafted, The Couple Next Door is a gripping thriller of the highest order. I couldn't put it down."  —A. J. Banner, bestselling author of The Good Neighbor
"Shari Lapena has written a stunning debut thriller. Turn on the night lights and lock all your doors and windows. The Couple Next Door grabs you with each twist and shocks you with every betrayal." —Linda Fairstein, New York Times bestselling author of Killer Look
"A plot that doesn't stop surprising until the very last page." —Metro (Toronto)
"The Couple Next Door opens brilliantly. . . . I continued at a breakneck pace to the end." —The Guardian (UK)

"The best white-knuckle ride of the year." —Daily Mail (UK)

"It's hard not to read to the end. . . . The twists waiting there are gratifyingly clever." —USA Today

"Twists are subtly revealed with aplomb, taking the story to increasingly unpredictable levels. . . . The Couple Next Door is a well-sculpted domestic thriller." —Associated Press

"The tension is high and remains to the last, stunning page." —The Times (UK)

"Brisk prose style and character development are almost beside the point in Lapena's suspense-fiction debut; this is a plot-driven page-turner, and even the most character-focused readers will find it hard to put down." —Booklist

"The many never-saw-them-coming twists and questionable characters. . . will keep you on the edge of your seat. First-time novelist Lapena's writing is spare and tense, and it makes The Couple Next Door a compulsive read. The last line is absolutely killer." —Good Housekeeping

Other titles by Shari Lapena

Not a Happy Family

The End of Her

A Stranger in the House

A list of fabulous fiction (and sneak preview of 2020's hottest books), by Samantha M. Bailey, whose debut novel, Woman on the Edge, is out now.

Robyn Harding on where The Party started, the surprising joys of writing dark, and how to make the reader keep turning the page.

Kristine Scarrow: Books to Get Away With

Books to take you away—or to take away with you when you're taken away, even.