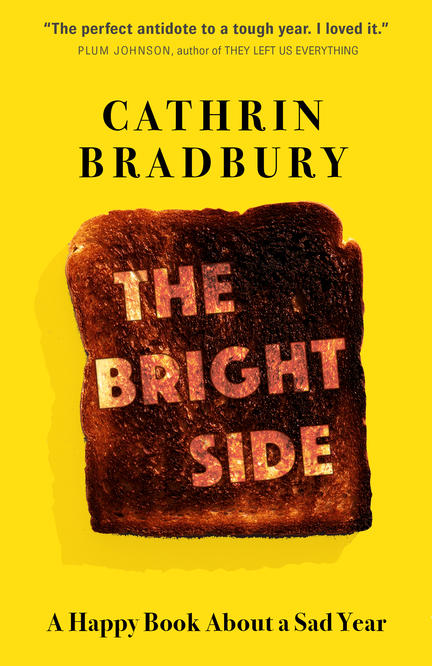 “Anyone who has had their life completely gutted and rewired will adore this family story. Bradbury's dark humour and gloriously upbeat voice makes it the perfect antidote to a tough year. I loved it!” —Plum Johnson, author of They Left Us Everything
The hilarious and moving story of how your life can change utterly in a single year—and how, even when the universe decides to kick you around, you can find yourself rewarded with grace.

Cathrin Bradbury’s seemingly stable world implodes in the space of a few months. Her beloved parents die; her marriage limps to an end after twenty-five years; her heavily mortgaged house turns against her; and a promising new romance ends in crushing disappointment. Never one to slow down for self-reflection, Bradbury now suddenly finds herself in her fifties, stone still, and crumbling to rubble in the midst of so much turmoil.

But the wrecking ball tearing her existence apart has cleared the way for a new path (or three or four) to open up. As a distraught Bradbury navigates these setbacks and heartbreak, she discovers welcome surprises and unexpected upsides revealing themselves as well. After 20 years of upheaval and estrangement, her troubled brother makes an astounding recovery to health and sobriety; she is reunited with her closest childhood friend after decades of absence; and Bradbury and her four siblings feel their way to becoming a new kind of family without their parents. She discovers that the path of profound change is steep, the view obscured, but there’s light ahead—if you’re brave enough to look for it.

Cathartic, hilarious, and deeply moving, The Bright Side proves that every situation has a silver lining—even when it’s just the duct tape holding the fragments of your life together.

CATHRIN BRADBURY is a Senior News Director at CBC News. She has worked as a leader and top editor at The Globe and Mail, Metro News, and Maclean’s magazine. Her writing often appears in the Toronto Star, where she is a regular contributor. She lives in Toronto.

“It is rare for a memoir to be very funny and unwaveringly honest. But Cathrin Bradbury’s The Bright Side is brilliantly both. You could (quite correctly) call The Bright Side charming—but only if you also point out that it is smart, beautifully written, and mercilessly clear-eyed on the subject of what time has in store for us all.”
—David Macfarlane, author of Likeness

“Anyone who has had their life completely gutted and rewired will adore this family story. Bradbury’s dark humour and gloriously upbeat voice makes it the perfect antidote to a tough year. I loved it!”
—Plum Johnson, author of They Left Us Everything

“The Bright Side is funny and wise and sparky and surprising and heartbreaking and weird and honest and smart and gutting and completely whole-hearted without ever veering into maudlin or precious or self-indulgent, which is an enormous feat.”
—Leah McLaren, author of Where You End and I Beg

“In a spirit reminiscent of the great Nora Ephron, Cathrin Bradbury finds the funny in her own failings and the humour in heartbreak with her razor-sharp prose. The Bright Side reminds us when things get messy and painful, laughter is as important as light.”
—Jessica Allen, The Social
“One of the miracles of this funny and poignant book is that Bradbury makes growing up along the Niagara Escarpment sound as enchanting as Paris. And in this era of fractured relationships, The Bright Side‘s magnificent depiction of her parents’ steady love for one another will touch hearts. The Irish-Catholic father, in particular, with his shined shoes and incessant cheerfulness, was wonderfully drawn. Not a wasted word—I loved it.”
—Catherine Gildiner, author of Good Morning, Monster and Too Close to the Falls
“The year 2015 was not a good one for Cathrin Bradbury, a veteran journalist and senior news director at CBC. After divorcing her husband of 25 years, she was forced to navigate the loss of a new romance and the passing of both parents – all in one truly awful annus horribilis. The result is this warm, chatty memoir, which serves as both a meditation on family and friendship and a love letter to Toronto and its colourful media characters.”
—The Globe and Mail

“A beautifully written and unabashed family memoir focusing on one bummer of a year. A book that can evoke both laughter and tears on the same page.”
—The Hamilton Spectator

“[A] memoir of longing and loss as well a lightness of being. . . . [The Bright Side’s] charm lies in its relatability, which is underscored by Bradbury’s wry voice, black humour and frank assessment of the world and her place in it.”
—Everything Zoomer