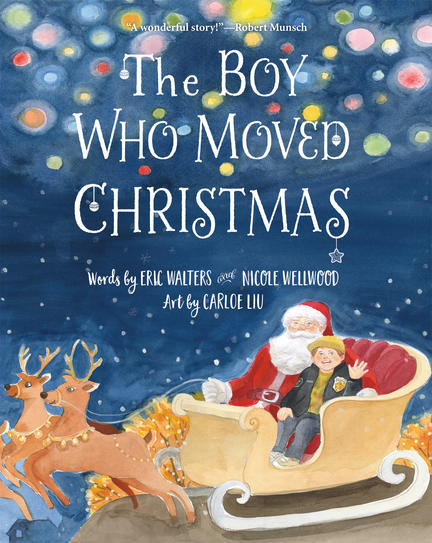 Based on a true story, this is a touching reminder of the power of Christmas and community spirit, no matter what the time of year.

It's October, but in seven-year-old Evan's town, every house is decorated for Christmas and a giant holiday parade is about to begin. The bump in Evan's head means he might not make it to December, so all his friends, family, neighbours, and thousands of strangers have moved Christmas just for him.

Evan is delighted to see the trees, the lights, and even snow, but he's a little worried that the parade might not be complete. How will Santa know he needs to visit so early? Will it even feel like Christmas without Santa there?

Based on the true story of Evan Leversage and featuring an afterword by his mother, Nicole Wellwood, The Boy who Moved Christmas is a loving tribute from the duo behind Always With You, and a touching reminder of the power of the Christmas spirit—no matter what time of year.

A single mom to three boys, Nicole Wellwood has been a fierce advocate for childhood cancer awareness for over nine years. After her middle son, Evan, passed away following a five-year fight, she decided that his legacy needed to continue so that children would have the chances he did not. In 2015 she launched Evans Legacy. Nicole is a "Momcologist" and public speaker.

Carloe (Shan) Liu is an illustrator, printmaker, and art teacher. She was born in China, studied media arts in Japan, and has a masters degree in Fine Arts. In 2008 Carloe immigrated to Canada. After working as a graphic designer for years, she gave birth to her son, Lufei, and started focusing on illustration. She likes to use watercolour, oil pastel, coloured pencil, and linocut print. She has also illustrated Always With You, written by Eric Walters. Carloe lives in Halifax with her family.

A heartwarming seasonal picture book about a town that staged Christmas in October to make sure one young resident wouldn’t miss out because of a terminal cancer diagnosis.

Canadian legend Eric Walters, along with the mother of the child the story was inspired by, Nicole Wellwood, handled a difficult topic well. The tone is more joyful than tragic, with subtle opportunities to open age-appropriate discussions in the text, and a closing essay adds more detail for older readers. Charming artwork and lots of it, with not too much text on each page, make it a perfect read-aloud for little listeners with shorter attention spans!

Other titles by Carloe Liu