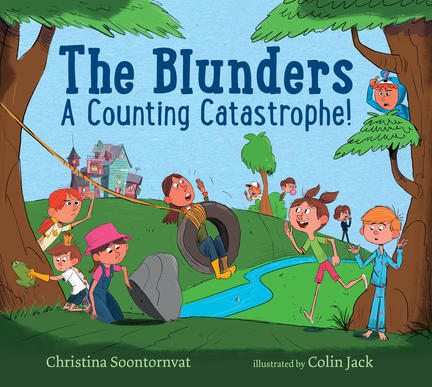 One, two, three . . . Wait, who am I missing? The Blunder kids’ head count somehow keeps falling short in this funny and familiar tale.

It’s not even lunchtime, and already the ten Blunder children have messed up the laundry, the bathtub, and taking care of the animals. They are driving their mother up the wall. So she sends them out to play with just two rules: keep track of one another and make sure everyone is home by sunset. As the day draws to an end, each Blunder tries counting the others — forward and backward, in English and Spanish, and even by twos and three — but comes up with only nine. Uh-oh! Will their mother forgive the biggest blunder of all? Inspired by a common folktale, Christina Soontornvat shares a humorous story about ten kids who just can’t get things right, while Colin Jack’s adorable artwork lets readers in on the joke that each child is forgetting to count him- or herself.

Christina Soontornvat is the author of two Newbery Honor books A Wish in the Dark and All Thirteen, which also won the Kirkus Prize and a Sibert Honor distinction. She is also the author of Scholastic’s beloved fantasy series Diary of an Ice Princess, and the picture books The Ramble Shamble Children, The Blunders, and Simon at the Art Museum, as well as the forthcoming To Change a Planet. Christina holds a B.S. in Mechanical Engineering and a master’s degree in Science Education. She spent a decade working in the science museum field, where she designed programs and exhibits to get kids excited about science and STEM. Christina lives in Austin, Texas, with her husband, two young children, and one old cat. You can learn more about her work at soontornvat.com.

Colin Jack has illustrated several books for children, including the Galaxy Zack series, Toads on Toast, and If You Happen to Have a Dinosaur. He also works as a story artist and character designer at DreamWorks Studios. He lives in California with his wife and two kids.

At the end of a day spent outside, 10 siblings each take a turn counting themselves and come up one short. What will they tell their mother?...This could lead to some storytime or classroom counting fun.
—Kirkus Reviews

Other titles by Christina Soontornvat

The Tryout: A Graphic Novel

Other titles by Colin Jack

If You Happen to Have a Dinosaur

How To Look For Extra-Terrestrial Life