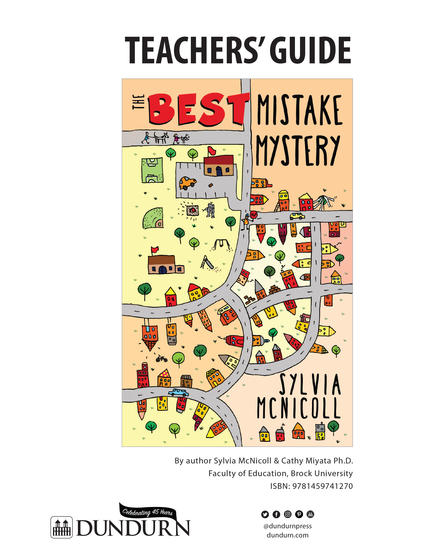 Dogwalker extraordinaire Stephen Nobel can get a little anxious, but his habit of counting the mistakes he and everyone else makes calms him. His need to analyze gets kicked into hyperdrive after two crazy events happen in one day at school: the bomb squad blows up a backpack and someone smashes a car into the building.

To make things worse, that someone thinks Stephen can identify them. Stephen receives a threatening text. If he goes to the police, his favourite dogs, Ping and Pong, will get hurt. The pressure mounts when his new best friend, Renée, begs for Stephen’s help. Her brother has been charged with the crimes and she wants to clear his name.

Is it a mistake to give in to dognappers? How can he possibly save everybody? To find out, Stephen will have to count on all of his new friends.

Sylvia McNicoll wrote her first book, Blueberries and Whipped Cream, as a project for a college writing course in order to explore a tragedy that occurred in her own high school. She went on to teach creative writing at that same college for nine years, edit a parenting magazine for another eight years and write 29 more novels for a variety of age groups.
Most acclaimed are her three dog guide fostering stories: Bringing Up Beauty, Beauty Returns and A Different Kind of Beauty, which won and were nominated for many children's choice awards. Last Chance for Paris, her adventure book set on the ice fields of Columbia, explored ecological issues with glaciers before climate warming became a popular issue.
Her recent novel, Crush. Candy. Corpse, tells the story about a teen on trial for the manslaughter of an Alzheimer's patient. Reviewers and bloggers have declared it a must read for all high school students. In her thirtieth book Death Goes Viral, already a blockbuster hit in Norway, Sweden and Finland, Sylvia returns to the theme of life and death and the values our own mortality inspires in us.

The Best Mistake Mystery is a fun and complex mystery that will keep readers curious until the end. Based on this first installment, The Great Mistake Mysteries promises to be a great new series.

McNicoll has written a lot of good books; these two are another pair for that list.

As fun and frisky as the dogs that Stephen walks, and it’s refreshing to see both an affectionate father-son relationship and a sweet coed friendship represented so genuinely.

Other titles by Sylvia McNicoll

What the Dog Knows

Revenge on the Fly

Other titles by Cathy Miyata

Building speaking, discussion, and presentation skills in every classroom