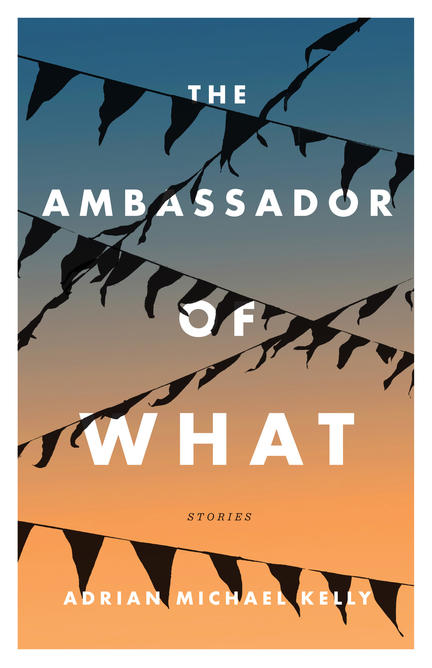 Slogging through the miles of a city marathon, an 11-year-old boy encounters small miracles; about to marry one of her patients in a home for the elderly, a nurse asks her estranged son to come to the wedding and give her away; home from university, a young man has Christmas dinner with his hard-up dad in a bistro behind a rural gas bar. Men and boys and maleness, money and its lack, the long haunt of childhood, marriage and divorce — these lie at the heart of The Ambassador of What. Driven by an ear for how we talk, how we feel, how we fail, and how we love, these are tough and tender stories that take hold, and linger.

Adrian Michael Kelly was born in Timmins, Ontario, but grew up in Campbellford. After taking a BA in English at Trent, and an MA in English from Queen’s, he lived in South Korea, Switzerland and Italy. He then moved to Calgary to complete his doctorate. His short fiction and literary journalism have appeared in The Queen’s Quarterly, Filling Station, paperbytes, Ffwd, Alberta Views and the Calgary Herald.

Excerpt: The Ambassador of What: Stories (by (author) Adrian Michael Kelly)

My molar, it hammered me. I groped for the clock and turned the yellow-green glow of its hands away. 3:15 a.m. Go and get some Orajel, or put an aspirin on it, but we had no hallways, only rooms. Dad would hear.

We lived behind the Acropolis. Our landlords were the owners, and I could hear them in there now. Elena sang a song in Greek, stacking plates and saucers. Nik fried an onion. He always did that first. The smell of it bustled sharp and strong through the heating vent. I got out of bed. Any normal Saturday, we were already up an hour and slogging down the road.

Dad was having apnea. I peed loud and flushed, and had a look at my tooth in the mirror. The gum beneath it bulged. I pressed it and I tasted it, the poison of myself. A pair of aspirins in my palm. One I swallowed at the fridge with skim. The other I wedged in the cavity. My mouth knew to make more spit.

Onion filled the flat now. I opened the door and screen. Rain pocked the river. In for a landing on the embankment came a fat and filthy gull. It waddled underneath the deck, where torn-open bags of Acropolis trash filled the stinking big blue bins. Other gulls were scrumming there. That hideous heads-up gape-beak screaming.

Dad yawned and did a fart. I went to his door.

He did the English: I say, soldiers do sound jolly good.

I said, Indubitably, but when I filled the kettle up, my hand shook, my whole arm.

Time we got that car unloaded.

Right. Let’s get it done.

Dad was an odd combination, part-time on the ambulance, full-time painter-decorator. The Bel Air smelt of Varsol. Ladders rode the roof. We took them off and chained them to the railing around the deck. Rain dripped from our noses. Dropsheets big as sails and heavy, gallons and quarts and pints of paint, the machine for stippled ceilings, we unloaded all of that and plunked it on the kitchen floor. I pulled the cling of my T-shirt free.

I stepped around the tools and gear in soaking wet sock feet. Imagine if I fell. All these hard, edged things.

Pink and clean as new pork cutlets. I put on my Wrangler jeans. The brown plaid Western dress shirt. Tomorrow I hadn’t decided. The one was a real Bill Rodgers singlet. It had a blue band across the chest. The famous BR logo. Dad got it me in Boston. The other was from my school. A gift from VP Evans. Heck of a thing you’re doing, son. Hope you’ll be our ambassador. The shirt was yellow as corn on the cob. Halfway down the front it had a tall green pointy star. Skinny letters in the star said p H s. No one would have a clue what they meant, but I had red shorts with a yellowy stripe, and none with any blue. The longest time I stood there, staring at one and then at the other. Finally went with yellow and green. Ambassador of what.

Dead leaves plastered Highway 30. We passed the Klaussen farm. Holstein cows, their udders and their arses caked, plodded up a slant of mucky barnyard. High in the air over Pine Ridge, a hawk tilted in the wind and rain. Dad rolled down his window. The wiper had started to stagger. He reached out, and gave it a flick. Then he sniffed.

I looked at the gauge. The lean of the needle.

He banged the dash. Filthy cunt.

I sank in my jacket.

We pulled in at the Shell near Brighton. Dad got out and popped the hood. Squalls of steam escaped. Round to the back of the wagon he went and swung the tailgate open. Cool air rushed inside the car. He unlatched his first aid kit. Took out tape and gauze and swabs, a pad.

You, he said. Off your arse.

I met him round the front.

He said, Get your coat off. Hold it up and keep this dry.

The radiator hose had split. He swabbed it like a dirty wound. Applied the sterile pad. Wrapped gauze around it. Then tape. My arms ached. The back of me, soaked. He lowered the hood.

Wait in the car.

Came back with a brimming bucket. Uncapped the rad, and filled it.

To have talons and wings and far-seeing eyes. To think just perfect hawk thoughts.

“Kelly is an adroit writer capable of rendering the trials of his brooding male protagonists fresh and meaningful … Scottish roots, working-class life, poetic heartbreak, keen observation, rich dialogue, and a gentle, ribbing humour run through these stories and the father-son banter is one of the most rewarding aspects of the collection.” — Quill & Quire

“The way Kelly wields (and welds together) words is astounding … When your brain finally clicks into Kelly’s rhythm, Ambassador accomplishes something rare: it feels fresh, a brand-new mode of storytelling; it rearticulates your way of seeing the world, reprograms your brain, gets your feet tapping to a different beat. And this is what makes it a book worth slowing down for.” — Canadian Notes & Queries

“The Ambassador of What is full of powerful stories not only of father and son but son and mother and brother and sister. All are well-written in a sparse prose that reflects well on how estranged family members speak to one another as they try to bridge the years and the opportunities lost by not maintaining closer connections. There is something for everyone in The Ambassador of What, but particularly for fathers and sons, whether they are close or separated by other events beyond their control.” — Miramichi Reader

“Adrian’s characters are torn between the almost sense-less intellectual life promised them by literature and their education, and their sweaty, violent, and violated origins in the world of hopeless work and father-and-son struggles to keep failure at bay.” — Richard Harrison, winner, Governor General’s Award for Poetry

“Taut as a flexed muscle, deft as a sideways glance, Adrian Kelly’s stories pull us into the tender, brittle world of fathers and sons. An illuminating addition to Canada’s new rural noir.” — Merilyn Simonds, bestselling author of Refuge

Other titles by Adrian Michael Kelly