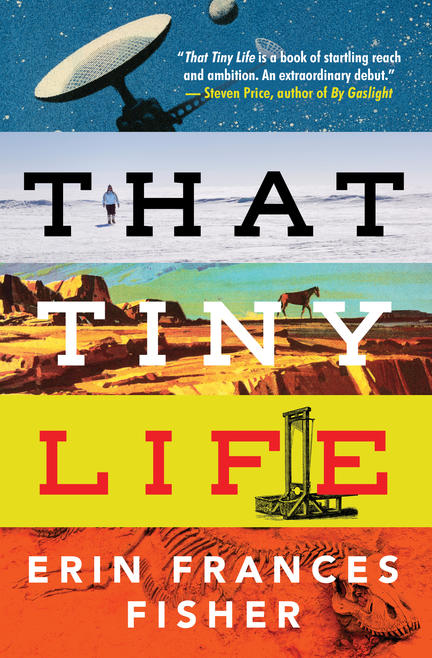 In settings that range from the old American West to pre-revolutionary France, from a present-day dig site in the high tablelands of South America to deep space, That Tiny Life is a wide-ranging and utterly original collection of short fiction and a novella that examines the idea of progress — humanity’s never-ending cycle of creation and destruction.

In the award-winning story, “Valley Floor,” a surgeon performs an amputation in the open desert in the American West. In “Da Capo al Fine,” set in eighteenth-century France, the creator of the fortepiano designs another, more brutal instrument. And in “That Tiny Life,” the reader gets a glimpse into a future in which human resource extraction goes far beyond Earth. Each story is infused with impeccably researched detail that brings obscure and fascinating subject matter into bright relief, be it falconry, ancient funeral rites, or space exploration. The result is an amazing interplay of minute detail against the backdrop of huge themes, such as human expression and impact, our need for connection, the innate violence in nature, and the god-complex present in all acts of human creation.

A highly accomplished, evocative, and wholly impressive work of short fiction, That Tiny Life introduces readers to a writer with limitless range and imagination.

ERIN FRANCES FISHER’s stories have been published internationally in literary journals such as Granta, PRISM International, the Malahat Review, and Little Fiction. She was the winner of the RBC Writers’ Trust of Canada Bronwen Wallace Emerging Writers Award, The Malahat Review’s Open Season Award for Fiction, and PRISM International’s Short Fiction Grand Prize. Erin holds an MFA in Writing from the University of Victoria and teaches piano at the Victoria Conservatory of Music. She is working on her first novel. She lives in Victoria, B.C.

The sawbones squats, his satchel by his knees, his back to the cart and the mules and their feedbags. He runs his forefinger along the tourniquet around Roy’s leg, rubs the pus between his fingertips and thumb, sniffs the lot, and says he’s taking Roy’s leg.

The sawbones pushes his specs up his disjointed nose and says that if he leaves the leg attached, Roy’ll be gone. Roy’s girl, just three, explores her mouth with her fingers. Her eyes big and gold as coins. She squats in the dirt in front of some thorny shrubs, a whelp in piss-stained trousers, the night growing fathomless above the hills behind her.

Girl’s new with us. Roy fetched her from the mother less than a week back. Don’t know why he picked her up when he did, since, one, he knew the child’s age from the letter, and two, he already had that crushed toe sending stripes up his foot.

The sawbones’ specs shine flat-lensed in the light from the firepit. I suspect they don’t so much alter his vision as give him a look. He bends over Roy, who’s laid flaccid under the cactus. Roy’s hair and skin and clothes are tacky with basin dust. The firelight blinks over his silhouette, pretties his discoloured leg and cracked lips. His cocky flip of curls thrown back from his ridged nose and cheeks and spread over the dirt. His eyes closed. Been passed out a while. I grab his good foot and jostle and release.

The sawbones rocks on his haunches, eyeing the mule I promised him for the trip. One of a pair. Sorrel, sturdy—three hands short of draft—and recently acquired, though Roy and I have been hauling supplies through the valley good on seven years. That’s seven years of spiny fruit and sunburn while carting basics to men batshit enough to have settled this particular desolation. Brutes searching gold, coal, oil midst the saltbush and boulders. The work gives Roy and me a nice, healthful pay, but only because not many want the job. Heat’s hard on the mules and water takes up half the wagon.

The girl pulls her fingers from her mouth and wipes them across her shirt. Sawbones removes his specs, holds the lenses to the light, then plucks his hanky from his coat and polishes. His kerchief’s done-up old style—stitched around the trim with cream dashes—same era as the jacket, which has buttons top to bottom, but hangs wide open. Plush fabric, carpet-like, worn thin down the back. Like he’s spent his life sitting. He settles his specs back on that crooked nose and loops the wires around his ears.

Roy, flat-out, chest hardly lifting each breath. I put a hand on my lips and jaw. All the grit there, in the lines and loose skin—the valley sucks away fat. Seems to have aged twenty years though it’s only been those seven, and we were both young men when we acquired the route. He and I been partners too long now to know who owes who—though I suspect at this moment it’s him who owes me. We have a friendship. Which is why I said nothing when Roy kept the girl.

I recline against the wagon and set a knuckle to the forehead of the nearest mule, and the mule leans into it. Soft-nosed beast. “Take the leg then,” I say.

Sawbones opens his satchel and reaches out a pan, a leather roll, and a hard-cased cautery set. Kicks the logs and exposes the coals and balances the pan. Unsnaps the cautery case and sets the long-handled irons into the fire.

I uncap a jug and fill the pan. The sawbones fiddles with the knot and unrolls the leather wrap. Tools inside flash blade to spine: tongs, scissors, various knives. He thumbs the clasp on a worn medical bag. Vials strapped to the underside of the lid. The interior’s full of glass flasks and spools of silk and gauze. He tips a vial of iodine into the pan, then opens a jar of alcohol. Wipes down each blade with a soaked bit of cotton and sets the equipment ready on top the leather sheath.

Sawbones removes and folds his coat and lays it on the bow of the wagon. He steps to Roy’s side and snips the torn pant leg. Twice the normal size below the knee, and two of the black toes sport open sores.

“Lift.” Sawbones waves at the foot. I lift. He slides a sheet of oilskin under the thigh. “Down.” He and I loop rope around Roy’s wrists and good ankle, then tie the rope onto stakes and pound the stakes into the dirt. Sawbones pulls a cotton swab from the bag and wipes Roy’s leg.

“Sit on him.” Sawbones tests the tourniquet already around Roy’s upper thigh. I take my spot kneeling on Roy’s shoulders, and the girl comes up beside me. Kid’s already kicked off and lost her shoes and stands barefoot in the cooling sand.

“Turn round,” I say, and when she won’t, I grab her. Press her face into my chest.

A Recommended Reading List by the author of That Tiny Life.

8 Short Story Collections To Put on Your Summer Reading List

There's still plenty of summer left, and it's not too late to add these story collections to your reading lists.