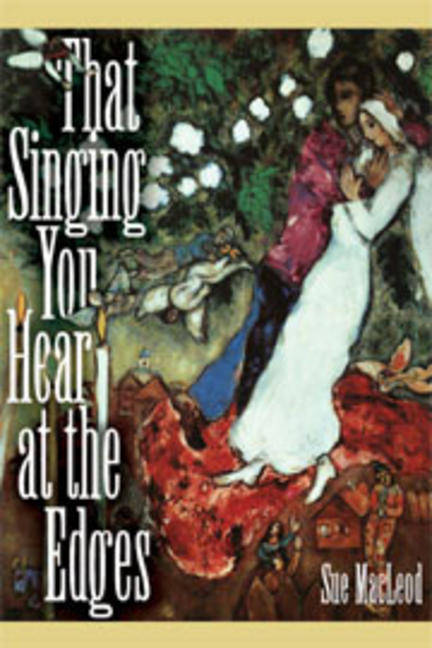 This is a collection in which the unexpected is commonplace: "the" and "an" attend a 12-step group for co-dependents; the human tongue is exposed as "old amphibian"; and The Angel of You Made this Mess, Lie Down rises from tangled bedsheets. MacLeod works intimately, intricately, with the power of nuance, of detail. The dividing walls of time and place remain intact but approach transparency because of what turns visible — and audible — when we become still enough to hear the singing at the edges.

Rooted in a particular life but looking outward, these poems express a full range of emotion. In the linked section, the gathering up of each wave before its breaking, a mother, a daughter and a Cape Breton village form a story that is both personal and archetypal: a blueprint for growing up — for "learning long/ division" in a vast and changing world.

Two of the poems in this book have won national prizes: Arc's Poem of the Year award, and Second Prize in the LCP's National Poetry Contest. When the final poem, "Especially for a woman, reading," was broadcast, listeners responded from across the country, asking: where can I get a copy? This book is the reply.

Sue MacLeod has filled her career with the written word, working as a writer, an editor, and a library assistant. Born to a military family, Sue moved many times throughout her childhood but always felt rooted in Nova Scotia, where her family returned each summer. That rootedness is apparent in her two books of poetry and in her novel Namesake, which received a starred review from Quill & Quire and was a Best Books for Kids & Teens selection. Sue now lives in Toronto, Ontario.

Excerpt: That Singing You Hear at the Edges (by (author) Sue MacLeod)

The God of Pockets

The God of Pockets smiles on children. On their thumb-polished chestnuts. And what She, in her benevolence, sees as their innocent lint. She sees the lucky penny drop, knows the hunger of keys. Knows what the landlord has tallied on his calculator. Knows the man who sleeps outside the library. In particular, the flattened pack of smokes against his chest. She's held the knife that carved the crooked heart into the tree trunk. The referee's whistle. The mickey of gin. The wallet, and the picture in the wallet, and the smile in the picture. The finally unbearable weight of a gun in its holster. Weight of a secret, held in. She's the god of tide pools. Of harmonicas. Marsupials. A mother bounding forty miles an hour through the flatlands, joey leaning out over the edge. She knows the way to a ten-dollar bill tucked in last winter's coat on a flat-broke day in spring—like one more thing that time's forgotten. And on bright days when the swing sets and the iron rails of the monkey bars throw shadows, tall as office towers spreading to the outback, the God of Pockets speaks to children. Run, She says. Take what you can.

To a friend with her daughter, washing dishes

We speak of old age, and put it away again: thought on a string. I sip your good, strong coffee while we joke about our forties as a dress rehearsal. Curtain time ahead! We scare ourselves like kids at movies. How we do exaggerate, the way I do now, convinced that Lynne’s movements are smoother, more supple than yours as you work together at the kitchen sink. And when did her hair become thicker? more auburn? I watch her shoulder blades—a pair of wings could sprout there. And she’s the one best able now to reach the highest shelf. There’s a shift taking place, this is just the beginning, as if something’s draining out of us and into them. Remember how big we were once? We were giants of women. With young daughters riding the curves of our hips, we’d glide through our rooms collecting Mommy’s keys, and Mommy’s wallet. We were Olive Oyl. We were Popeye, too.

A shaft of light is falling through your window now and spreads to every surface. There are no clear dilineations, not like in the swimming lessons when the girls were small. The comfort of badges, of lanes. And no bigger miracles, maybe, than this: that we’re talking in the kitchen, still, and our girls nearly grown. And there’ll be no well-marked corridor to old from not old yet—only gradations of light, of heat touching and leaving the skin. But what do I know? sitting here with my coffee where I can still play with an image like this one: that we’re all enrolled in the same dusty classroom, an old-fashioned classroom, early afternoon, lingering odor of paperbag lunches from home, and they’re writing on the blackboard with their backs to us, our large and shining children, and the chalk they’re using used to be our bones.

“That Singing You Hear at the Edges is the section collection from Halifax's first and current poet laureate, Sue MacLeod. Her first, The Language of Rain, established MacLeod as a poet wonderfully adept at teasing the numinouns out of ordinary circumstances.

Her focus in this second book is primarily on the ways in which family, place, past, and the immanence of death conjoin to figure the heart. There are poems here you can expect to see widely anthologized.

And not just the ones that have already won the prizes, like Arc's Poem of the Year (for 'The God of Pockets'), but poems like 'She Looks Back, which carry such a weight of feeling with such grace and so little evident strain.”

Other titles by Sue MacLeod