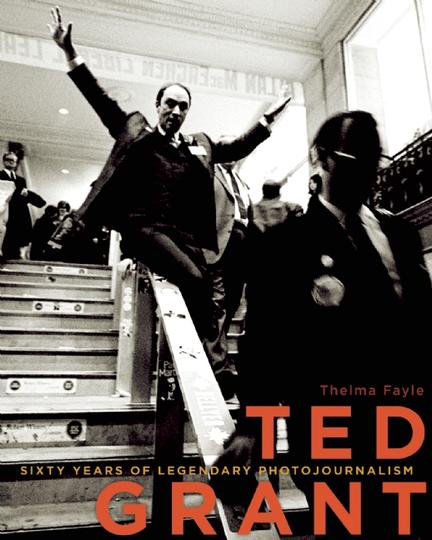 Ted Grant, the undisputed father of Canadian photojournalism, has made a career out of being in the right place at the right time. Over his sixty years in the business, he has immortalized some of the greatest events in history and caught some of the world’s most famous and elusive subjects in rare moments of unaffected humanity. From Pierre Trudeau sliding jubilantly down a banister to Ben Johnson in his brief moment of glory at the 1988 Olympics to Sue Rodriguez in her right-to-die campaign, Grant has amassed a collection of over 300,000 photographs—the largest by a single photojournalist in Canadian history.

Based on over fifty interviews with the man himself (as well as with his family, friends and colleagues across Canada) and extensive research of the Ted Grant Special Collections in Ottawa, this book is both an iconic and an intimate portrait of the second half of the twentieth century, Canada’s coming of age, and the man who saw it all through the lens of his camera.

Thelma Fayle is a freelance writer with a BFA in non-fiction writing from the University of Victoria. She has been published widely in the Globe and Mail, Reader's Digest, CBC.ca, The Tyee, the Times Colonist, Boulevard, Focus, Senior Living, the IPAC Journal and the Highlander. She is a member of the Professional Writers Association of Canada (PWAC) and the Writer’s Union of Canada (TWUC). She lives in Victoria.

Maureen McTeer is an author and lawyer, specializing in health policy and medical law. Tough Choices: Living and Dying in the 21st Century is her third book. She has been a visiting scholar in the School of Public Health at the University of California at Berkeley; she has practised law in Toronto and Ottawa and has lectured on law at the Universities of Calgary and British Columbia. She is a member of the Clinical Ethics Committee at the Ottawa Heart Institute and a public member of the Committee on Accreditation of Canadian Medical Schools. In addition, Ms. McTeer is a member of the Boards of the Canadian Living Foundation's Breakfast for Learning, and the Canada-China Child Health Foundation. She was a member of the Royal Commission on New Reproductive Technologies from 1989–91.

"Fayle does in words what Grant does in image: notices, captures and shares individual, resonant moments." —Amy Reiswig, Focus Magazine

"An excellent book about one of Canada’s most esteemed photojournalists. It's one I’d put on the required reading list if I were to teach a photography seminar." —Photo Life

"This biography goes deep into the life of the renowned Canadian photojournalist who shot nine Olympic Games, the Vietnam War, and countelss iconic Canaidan and international moments. . .The biography speaks to Grant's bold spirit and colourful character, which is reflected in his work." —BC Books for BC Schools, 2014-15

Other titles by Maureen McTeer

In My Own Name

Living and Dying in the 21st Century

Other titles by Joe Clark

Canada in a Century of Change

The Power of the Pen

The Politics, Nationalism, and Influence of Sir John Willison