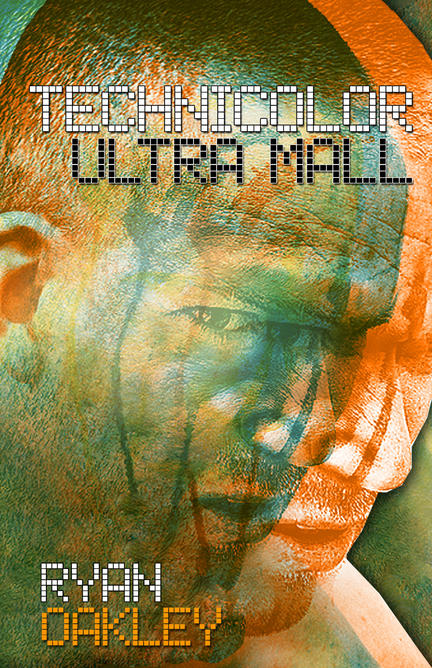 In the commodified future the consequences of a falling society are brought to bear upon one man's ambition and his attempt to escape his own socio-economic hell.

The world's ecosystems have been destroyed by genetic pollution and cities have evolved into mega malls. Budgie is a knife wielding, brass knuckled young man from the impoverished and brutal red section of Toronto's T-Dot Center. When his best friend is murdered and Budgie falls in love with the woman responsible, he learns that there's more to life than drugs, blood or money.

To escape his past he must give up everything and everyone he knows and sell his perceptions to an enigmatic and dangerous gang leader. Fighting for survival and unwittingly involved in a scheme that only he can stop, Budgie must ask himself: Does he want to?

Technicolor Ultra Mall is an ultra-violent science fiction dystopic novel about the value of being human in a completely commodified world.

Ryan Oakley was raised in a small town and discovered at an early age that he was drawn to the bright lights, white noise and gaudy trappings of the big city. He works as a bartender, waiter and dishwasher, as needs be, and is fast becoming known as Toronto's most notorious dandy.

"Ryan Oakley kicks all kinds of butt. This is the story Philip K. Dick would have written if he'd lived to today: over-the-top, incisively satirical, and packing a major wallop. The prose sings even as the story makes you squirm; underneath all the slickness and sickness there's a passionate human heart, beating so damn fast it warps space. Oakley is a supernova about to blow a major new talent ready to burst on the scene and with this, his first novel, he'll light up the entire sky." — Robert J. Sawyer
"Reading Ryan Oakley's writing is like being lit-jacked. Once Oakley's forty-five caliber prose is aimed between your eyes, you'll never forget it." — Minister Faust
"Oakley isn't so much concerned with what science fiction has been, but rather where it can go. And, unlike most of his contemporaries, he doesn't just write from his head, but from his gut. His work somehow manages to be both unsettling and deeply absorbing." — Jeff Lemire, award winning DC graphic novelist
"The consumerist mall-as-dystopia is not a wholly original idea, but I can't remember ever encountering one so unflinchingly brutal as Technicolor Ultra Mall. From the opening blaze of profanity-peppered violence to the bleak cataclysm of its conclusion, Oakley never eases the pressure, tearing aside the glossy veils of commerce to reveal the cynical profiteering beneath." — Paul Raven, reviewer, Futurismic