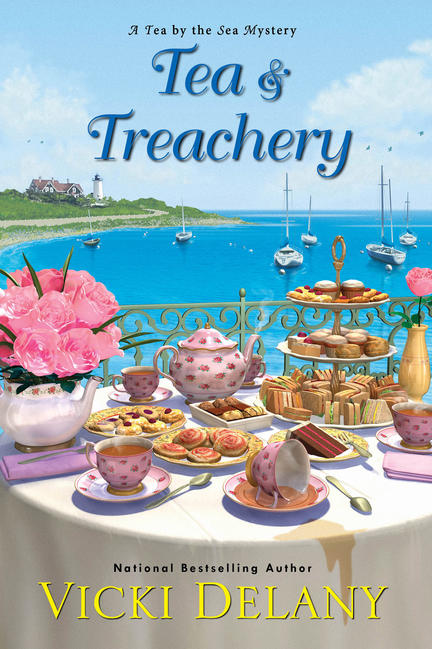 In this charming new cozy mystery series from national bestselling author Vicki Delany, a New York City expat-turned-Cape Cod tea shop owner must solve the murder of a local real estate developer to help her feisty grandmother out of a jam . . .

As the proud proprietor and head pastry chef of Tea by the Sea, a traditional English tearoom on the picturesque bluffs of Cape Cod, Lily Roberts has her hands full, often literally. But nothing keeps her busier than steering her sassy grandmother, Rose, away from trouble. Rose operates the grand old Victorian B & B adjacent to Lily’s tea shop . . . for now. An aggressive real estate developer, Jack Ford, is pushing hard to rezone nearby land, with an eye toward building a sprawling golf resort, which would drive Rose and Lily out of business.

Tempers are already steaming, but things really get sticky when Ford is found dead at the foot of Rose’s property and the police think she had something to do with his dramatic demise. Lily can’t let her grandmother get burned by a false murder charge. So she starts her own investigation and discovers Ford’s been brewing bad blood all over town, from his jilted lover to his trophy wife to his shady business partners. Now, it’s down to Lily to stir up some clues, sift through the suspects, and uncover the real killer before Rose is left holding the tea bag.

“Delany’s down-to-earth heroine wraps up this investigation with even more than her customary panache.”
—Kirkus Reviews

“Gemma is a delightful sleuth, and the tidbits of Sherlockiana will engage both cozy fans and Holmes devotees.”
—Booklist

“Holmes, himself, would be quite proud!”
—Suspense Magazine

“Delany's latest work can hold its own against anything in the genre being published today.”
—Deadly Diversions

“It’s a crime not to read Delany.”
—London Free Press

A Scandal in Scarlet