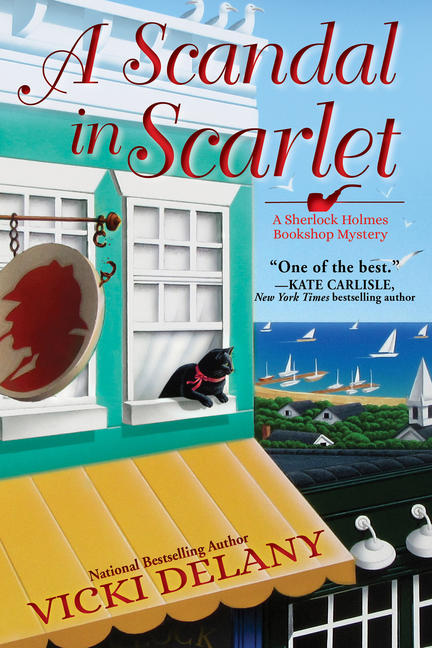 Gemma and Jayne donate their time to raise money for the rebuilding of a burned out museum--but a killer wants a piece of the auction.

Walking her dog Violet late one night, Gemma Doyle, owner of the Sherlock Holmes Bookshop, acts quickly when she smells smoke outside the West London Museum. Fortunately no one is inside, but it's too late to save the museum's priceless collection of furniture, and damage to the historic house is extensive. Baker Street's shop owners come together to hold an afternoon auction tea to raise funds to rebuild, and Great Uncle Arthur Doyle offers a signed first edition of The Valley of Fear.

Cape Cod's cognoscenti files into Mrs. Hudson's Tea Room, owned by Gemma's best friend, Jayne Wilson. Excitement fills the air (along with the aromas of Jayne's delightful scones, of course). But the auction never happens. Before the gavel can fall, museum board chair Kathy Lamb is found dead in the back room. Wrapped tightly around her neck is a long rope of decorative knotted tea cups--a gift item that Jayne sells at Mrs. Hudson's. Gemma's boyfriend in blue, Ryan Ashburton, arrives on the scene with Detective Louise Estrada. But the suspect list is long, and the case far from elementary. Does Kathy's killing have any relation to a mysterious death of seven years ago?

Gemma has no intention of getting involved in the investigation, but when fellow shopkeeper Maureen finds herself the prime suspect she begs Gemma for her help. Ryan knows Gemma's methods and he isn't happy when she gets entangled in another mystery. But with so many suspects and so few clues, her deductive prowess will prove invaluable in A Scandal in Scarlet, Vicki Delany's shrewdly plotted fourth Sherlock Holmes Bookshop mystery.

Praise for A Scandal in Scarlet:
“Well-plotted...Delany’s liberal sprinkling of references to real pastiche novels and reference books makes this cozy a treat for Holmes buffs."
—Publishers Weekly

“Gemma is a delightful sleuth, and the tidbits of Sherlockiana will engage both cozy fans and Holmes devotees.”
—Booklist

“Suggest for fans who enjoy humor in the Sherlock Holmes pastiches or readers of Carolyn Hart’s ‘Death on Demand’ mysteries.”
—Library Journal

“These books are so much fun and so well-done, it is clear that Delany is in love with her characters as much as her die-hard fans are.”
—Suspense Magazine

Praise for the Sherlock Holmes Bookshop mysteries:
“A great one!...As always with this series, the story is rich with everything from history to scenery to sarcasm, with even the feline stealing a scene or two along the way.”
—Suspense Magazine on The Cat of the Baskervilles

“A pure treat for dedicated mystery buffs by a true master of the genre.”
—Midwest Book Review on The Cat of the Baskervilles

“A twisty plot and an engaging main character. This series will appeal both to cozy readers and to Holmesians.”
—Booklist on Body on Baker Street

“A light-hearted and delightful romp...A perfect novel to read to while away a rainy afternoon with a cup of tea or to keep you company on vacation.”
—Seattle Book Review, five-star review on Body on Baker Street

“A perplexing mystery with a refreshingly intelligent and witty amateur sleuth, I enjoyed every well-crafted word of this Sherlock Holmes infused tale. A must read for lovers of all things Sherlock Holmes.”
—Jenn McKinlay, NYT and USA Today bestselling author of Better Late Than Never on Elementary, She Read

“Vicki Delany is one of my favorite mystery authors...I loved everything about this story! The Cape Cod setting was enchanting and the intricate mystery kept me turning pages late into the night. Easily one of the best new mystery series on the market.”
—Kate Carlisle, New York Times bestselling author of the Fixer-Upper mysteries and the Bibliophile mysteries on Elementary, She Read

“Elementary, She Read is a delight, fast, fun, and full of Sherlockian lore. Cheers for a charming, intelligent heroine as observant as The Great Detective himself.”
—Carolyn Hart, New York Times bestselling author of Walking on My Grave

“I defy anyone to read this book and not fall in love with the uber-observant Gemma Doyle...The best new cozy series of the year.”
—Laura DiSilverio, bestselling author of the Readaholics Book Club mysteries and the award-winning The Reckoning Stones on Elementary, She Read

“Huzzah for Vicki Delany who’s created vivid characters, a setting that will whet the appetite of mystery readers, and a who-dun-it well worth investigating.”
—Kylie Logan, nationally bestselling author of Gone with the Twins on Elementary, She Read