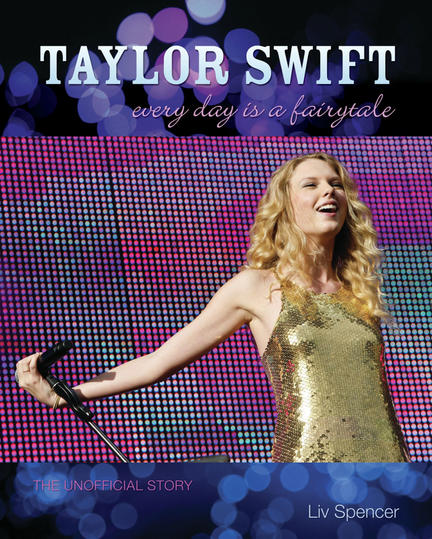 With albums and singles that head straight to the top of the pop and country music charts and a shelf full of awards, Taylor Swift was Billboard’s number one selling artist across all genres in 2008 — and all before she turned twenty. With her self-titled debut album in 2006, Taylor Swift rose to fame on the strength of her confessional-style songwriting on hits like “Tim McGraw,” and her sophomore album Fearless spent longer at number one than any album had in a decade.

Taylor Swift: The Unofficial Story provides fans with the first detailed biography of the young star: from her childhood in Pennsylvania to her early days trying to land a record deal by personally dropping off demos at Nashville record companies to the failed deal that ultimately lead Taylor to her current label — and international fame.

Full of colour photos, the book details Taylor’s songs, albums, and tours; her family, friends (like Miley Cyrus, Kellie Pickler, and Demi Lovato), and boyfriends (including the Jonas Brothers’ Joe); her musical influences, duets, famous performances, acting gigs (on CSI and in Valentine’s Day), and future plans. Taylor Swift: The Unofficial Story gets to the heart of this fearless young woman and her rise to the top of the music industry.

Excerpt: Taylor Swift: Every Day Is a Fairytale – The Unofficial Story (by (author) Liv Spencer)

Leaving Pennsylvania behind wasn’t too difficult for Taylor, who was literally moving closer to her Nashville dream and away from her bullying classmates, but it required a bigger sacrifice from the rest of her uprooted family, especially her father, who had to transfer his business. Nevertheless, the Swifts never put pressure on Taylor. She told Self magazine, “I knew I was the reason they were moving. But they tried to put no pressure on me. They were like, ‘Well, we need a change of scenery anyway’ and ‘I love how friendly people in Tennessee are.’” Andrea had faith in her daughter and trusted her intentions, “It was never about ‘I want to be famous.’ Taylor never uttered those words. It was about moving to a place where she could write with people she could learn from.”

She didn’t have a label anymore, but she had experience working with one. In 2004, Taylor was featured in an Abercrombie & Fitch “rising stars” campaign and one of her songs appeared on a compilation album, the Maybelline-produced Chicks with Attitude. “The Outside,” the song she’d written about feeling excluded in middle school, had found a temporary home.

It wasn’t long before Taylor found a home as a songwriter at Sony/ATV Records. She was the youngest songwriter they’d ever hired, which is an impressive feat, but Taylor knew she’d still have to prove herself by acting with maturity beyond her years. “I knew the stereotype people had when they heard the words ‘14-year-old girl’ was that I wasn’t going to do the hard work, and I wanted people to know that I was,” Taylor emphasized. “One of my first songwriting sessions was with [accomplished songwriter and producer] Brett Beavers, and I walked in with 15 different starts to songs. I love being prepared and I love organization, and I need people to know that I care and that this is important to me.”

Being a professional songwriter meant that Taylor had to lead a sort of double life, going to high school in Hendersonville during the day and writing songs in the afternoons in downtown Nashville, less than 20 miles away. Taylor called her life back then “a really weird existence,” and elaborated, “I was a teenager during the day when I was at school, and then at night it was like I was 45. My mom would pick me up from school and I’d go downtown and sit and write songs with these hit songwriters.”

The social politics of high school in Tennessee turned out to be very similar to those of junior high in Pennsylvania, but luckily for Taylor, there was one major difference that made school tolerable — a great friend. Taylor met red-haired Abigail Anderson in ninth grade English, when the new girl wowed the class with her sophisticated composition. “We were the ones in the back of the class saying negative things about Romeo and Juliet because we were so bitter toward that emotion at the time,” recalled Abigail. Neither girl was a member of the popular clique, so the pair made their own rules, focusing on what they actually cared about rather than what other people did. For Taylor, that was music; for Abigail, competitive swimming: “When I was a freshman, I knew I wanted to swim in college, at a Division 1 school, and she knew that she wanted to go on tour.” Such focus set the girls apart from their classmates, and bonded them together. Taylor explained to the New York Times, “It just dawned on me that I had to love being different or else I was going to end up being dark and angry and frustrated by school.” Being different meant staying away from the popular-girl party scene, which Taylor had already decided didn’t appeal to her. Taylor told Glamour, “I remember seeing girls crying in the bathroom every Monday about what they did at a party that weekend. I never wanted to be that girl.”

Other titles by Liv Spencer

The Unofficial Guide to Cassandra Clare’s The Mortal Instruments

The Unofficial Saga of Twilight

The Miranda Cosgrove and iCarly Spectacular!