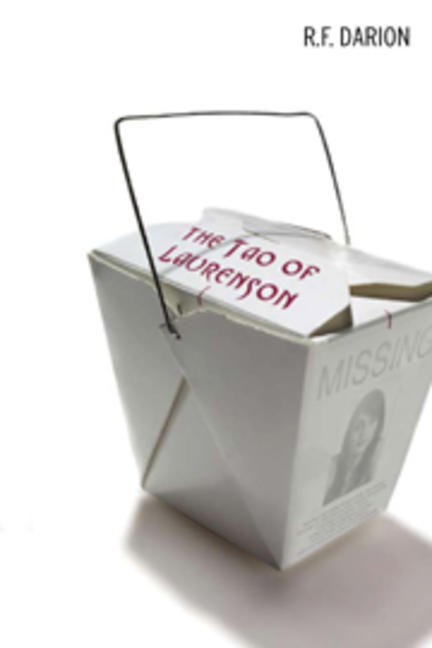 Edmonton-based R.F. Darion is already an established name with mystery readers for her series featuring RCMP Staff Sargeant Dan Laurenson, a man who tries to balance the traditional macho strictures of his job with his strong empathy for human nature.

In The Tao of Laurenson, a vagabond is seen wandering the streets of St. Michael, a town so small that everyone notices this stranger. When Laurenson stops to talk to the man, he discovers that Michaelangelo Smith is lucid and intelligent, and desperately trying to find his daughter who disappeared five years earlier. But Smith has a beef with police who offered him no support when she disappeared and even accused him of murdering her. Laurenson offers to help Smith but Smith refuses him.

After several strange attacks on Smith, however, Laurenson finds himself looking both for the girl and an attempted murderer, and thinking the unthinkable, could Rozalind Smith be trying to kill her father?

Excerpt: Tao of Laurenson, The (by (author) R.F. Darion)

At first, tunelessly humming, Smith didn’t hear him. Laurenson watched unobserved, content to take his measure of the man for a moment before engaging him in conversation. The cleanliness of the henhouse was striking, as was the friendliness of a little black hen that pecked quietly at the cuffs of the old man’s overalls as he worked. The impression created by the scene was one of repose in action, and of a bond between the man and his chickens. The sweet smell of hay contrasted strikingly with the stench in which so many farmers expected their chickens to live. A fastidious man like Laurenson could not help being favorably impressed.

He was less positively affected by the way Smith’s face hardened as looked up and saw a Mountie in his doorway.

“I beg your pardon?”

“The young ones refer to themselves as the RCMP. But no doubt you’ve noticed that yourself.”

Smith examined Laurenson’s sleeve and motioned toward the four stripes just below his shoulder. “Too many stripes,” he said. “I can’t imagine why anyone with that many stripes on his arm would be coming to see me.”

“Do you remember having seen me before?”

“Probably not. But I’ve passed you a few times lately in St. Michael. You were, I think, looking for someone.”

The leathery face of the man said “not bad” but quickly resumed its poker-faced expression.

“And I wanted to know more.”

“You must have gone to some trouble over me.”

The man forked a little more straw over into a relatively bare corner. “I wasn’t, as far as I know, wearing a sign with my name on it.”

“No. Nor were you particularly well-known.”

“I’m not even in the phone book, as you no doubt found out.”

“I didn’t even try the phone book,” Laurenson said. “Too many non-pubs these days.” This time he had no difficulty reading the timeworn face in front of him. “Too many numbers are unlisted these days. There are easier ways of tracing someone,” he added.

“Any word from your daughter?”

Smith forked a little more straw. “No. And no word from you folks either.”

“You’re all a bunch of bastards in my book.”

“Is that why you avoid cops who indicate they want to have a word with you?” Smith frowned and then laughed. “Oh, I think I know what you’re talking about. No. Well, maybe. But I’m sick of people asking if I’m all right; I figured it was just a matter of time before some busybody would sic the cops on me.”

“No cop worth his salt is going to mistake you for a mental case. Not unless you’re having one hell of a good day today.”

Smith chuckled and leaned his pitchfork against a wall. “People are funny. One day they’re out to make the world safe by getting you off the streets…without diddly in the way of a reason to think you’re a menace, by the way. The next day they’re sure you can’t cross a street without their help. With about as much commonsense behind their opinion, if you ask me.”

“Not a hell of a lot older. But I look older. My hair went white five years ago.”

“It must have been a terrible time for you.”

Smith looked searchingly into Laurenson’s face and seemed satisfied with what he found there. “So, does that mean you’ve decided to help me?”

“Help me find out what you people have learned about the body they dug up south of Spruce Grove last summer.”

“Of course I will. There’s nobody who has a better right to know. But I want you to tell me one or two things too.”

“If you think your daughter may be dead, why have you been looking for her so much this fall? I gather that’s what you’ve been doing, standing in public places known for their heavy pedestrian traffic, scanning every passing face.”

“Someone thought they saw her. Come on, I could do with a smoke. Want me to make you a cup of coffee?”

“Well, then, let’s sit down in the sun somewhere. I’m dying for a smoke.”

They sat on a wooden swing a little downhill in a small stand of trees. Smith lit a cigarette and sighed contentedly.

“You were saying someone thought they had seen your daughter,” Laurenson prompted.

“Yes, a neighbour who’d know her if anyone would. Not that it seemed likely. I hope she wouldn’t come back to St. Michael and not even stop in to see me. But you never know; I’d never have expected her to light out the way she did either.”

“It was totally unexpected?”

“No warning signs . . . even now that you’ve had more time to think about it?”

“Roz was never what you might call a contented person. The wonder was that she continued to live here with me once she got a job. She hated the farm. Through most of her teens she didn’t seem to like me much either. But that’s no reason to drop off the face of the earth, is it? I mean, kids leave home all the time. Why would I expect mine is going to do it differently…without a word, taking practically nothing. She was eighteen, after all; she could do what she liked.”

“What made you finally conclude she might have actually left of her own free will?”

“I don’t know. No, I take that back. I think the light went on for me when they got me to go through her things to see if anything was missing. No daughter—that’s one thing. But no blue suede suit . . . now that makes a person think. She loved that suit.”

“So it was something you couldn’t imagine her leaving home without.”

“I can’t imagine anyone being so attached to a piece of clothing that they would have to take it with them, no matter what. But Roz loved that suit and, though she liked nice clothes and had some choice items, she liked that particular suit more than any of the rest. The thing is—that suit didn’t just walk out on its own.”

“Maybe she tired of it without your being aware or noticing she’d gotten rid of it.”

“I’d have noticed. She looked like a million dollars in it.”

“So you say the light went on for you when you realized some of her favourite clothes were missing.”

“For you people, too. Only you’d become attached to the notion that I’d bopped her over the head and buried her in the back forty or something.”

“Not so easy to do in the dead of winter.”

“Aw, the old well would have done nicely. I could have put her down it and shoveled snow over top. The thing is, I didn’t.”

Laurenson wasn’t sure whether Smith was watching for his reaction with curiosity or defiance. “Apparently not. Why would you be in to see us five years later asking questions about a body we’d found if you’d already disposed of her satisfactorily?”

“So when was it the neighbour said she’d seen your daughter?”

“Not so easy to stake out the entire city on your own during harvest time.”

“Oh, I’m not still farming. I’ve rented my two quarters to a couple of neighbours. All I work now is my garden, the chickens and a few acres of tree farm.”

“How do you get into town?”

Smith looked at him sharply. “On my bike when weather permits. Otherwise I walk.”

“How long is it since you had a driver’s license?”

“A few years now. It’s not a problem, living this close to town.”

“Still, most people would keep their license current if they could.”

“I didn’t renew it three years ago because I had a problem with cataracts. Since then I’ve had my eyes operated on and I could reapply, I suppose, but my old truck gave up the ghost about the same time I thought my eyes had and since then the price of trucks has gone though the roof. Even something with a couple hundred thousand klicks on it will go for three thousand if you can start it.”

“Ever tried the auctions?”

“How long do you plan to keep watching for your daughter in town?”

Smith looked away. “Well, winter’s on its way. And, anyway, I guess I’ve given it about as good a shot as anyone could expect.”

The loss of eye contact bothered Laurenson. The words being spoken were completely innocuous but it was as though a blip had suddenly appeared on a previously blank radar screen.

“It was a harebrained thing to do in the first place,” Smith said.

“Admittedly, it doesn’t seem likely she’d return to St. Michael without contacting you.”

Again a blip. This time, a moment’s hesitation.

“Well, in any case, I’ll find out what I can for you about the remains found a few months ago.”

He sounded sincere and he’d stopped looking off toward a tumbledown section of ancient barbed wire fence. But still Laurenson wasn’t satisfied. Was he getting fanciful in his old age, or had Smith sounded too sincere?

“By the way,” he said, reluctant to leave just now. “I’ve been wondering about your name.”

Smith laughed. “What about my name?”

“Exactly the reaction my mother was hoping for, apparently. Smith was my father’s way of leaving the Old World behind when he moved to the new. My mother, however, wasn’t big on total anonymity.”

Other titles by R.F. Darion

Tip of the Halo