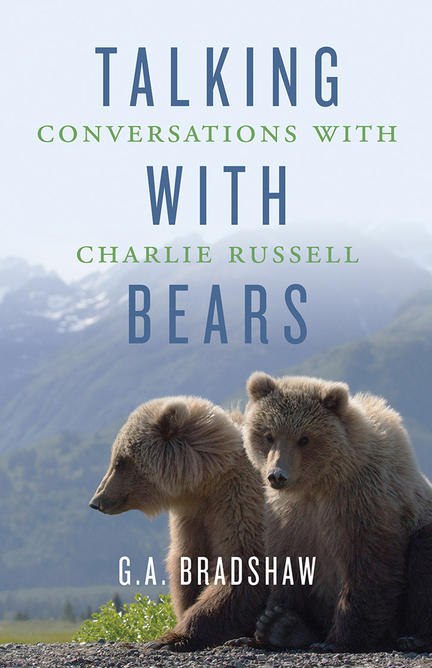 A highly literary and reflective portrait of Charlie Russell’s beautiful and unparalleled relationship with some of our planet’s most majestic giants.

Charlie Russell is a legend, not only in his home territory of Alberta but in all of Canada and around the world. An author of several books, including Walking with Giants: The Grizzlies of Siberia, The Spirit Bear: Encounters with the White Bear of the Western Rainforest, and Grizzly Heart: Living Without Fear Among the Brown Bears of Kamchatka, he has been the subject of numerous interviews, documentaries, and articles showcasing him and the bears he loved.

Talking with Bears is an intimate portrait of Charlie Russell’s philosophy of nature, which evolved over the 76 years he graced this planet. Accompanied by stunning photography, the book is written in narrative form, the way Charlie spoke and shared his stories and knowledge with others. Each of the chapters describes some facet of Charlie’s philosophy and experiences through the stories of individual bears and what they taught him: the meaning of trust, respect, attention, love, and much more.

Talking with Bears is written for everyone and anyone who yearns to rekindle the magic of living in alignment with nature and bring the teachings of Charlie Russell and his bears into their own lives.

G.A. Bradshaw is the founder and director of The Kerulos Center for Nonviolence (www.kerulos.org), a non-profit established in 2008. She holds doctorate degrees in ecology and psychology and a master’s in geophysics, and has published, taught, and lectured in the U.S. and abroad. From 1991–2001 she was a research mathematician with the USDA Forest Service while holding faculty positions at Oregon State University (Departments of Computer and Electrical Engineering and Environmental Sciences Graduate Programs). She was a Fellow at the National Science Foundation National Center for Ecological Analysis and Synthesis (NCEAS) in Santa Barbara, California. Her diagnosis of post-traumatic stress disorder in free-living elephants launched the field of trans-species psychology. This work expanded to include the study and care of great apes, parrots, orcas, and grizzly bears. Her books include How Landscapes Change (Springer-Verlag, 2002); Elephants on the Edge: What Animals Teach Us About Humanity (Yale University Press, 2009), which was nominated for a Pulitzer Prize; Minding the Animal Psyche (Spring #83, 2010); The Elephant Letters: The Story of Billy and Kani (Awakeling Press, 2014); and Carnivore Minds: Who These Fearsome Animals Really Are (Yale University Press, 2017). She has been published in both academic and popular media, including Nature, American Scientist, Developmental Psychology, Journal of Trauma and Dissociation, Ethology, and Psychology Today and been featured in The New York Times, Time Magazine, Forbes, National Geographic, Smithsonian Magazine, Stern, The Atlantic, The Telegraph, and The London Times, as well as on NPR, ABC’s 20/20 and in documentary films. She lives in Jacksonville, Oregon, U.S.A., where she cares for rescued animals at The Tortoise and the Hare Sanctuary.

Praise for Talking with Bears:

"I love this book. From dedication to the final page, the book made me openly weep. The tears were of homecoming, and recognition of our place in this world that is our only home. A love for wild nature – and specifically for bears! – informs every word. If we and the world survive, it will in great measure happen because of books like this one." ― Derrick Jensen, author of The Myth of Human Supremacy

"This extraordinary, view-altering series of true stories about the authentic nature of bears reveals them as the sensitive and intelligent beings they are. And in showing that the reality of bears is so different from our usual impressions – that they are such individuals and so prone to peace – Gay Bradshaw has given us not only another startling book but this time a deeply spiritual one." ― Carl Safina, author of Becoming Wild and Beyond Words

"A gripping, beautiful, unique account of two powerful minds (Gay and Charlie) coming to grips with an equally powerful one embodied in the great brown and black bears of the Pacific Northwest and of the Russian Far East. My favorite line? When Gay asks Charlie if he has ever been in love, the answer is Yes, with the bears of Kamchatka Peninsula. Reading this book will not only teach you something about bears that you will find in no other book, it will also teach you a great deal about love. What a bargain!" ―Jeffrey Masson, author of The Secret World of Farm Animals

"Figuring out how to share the planet with other big and powerful mammals seems one of the crucial tests for human beings in the time ahead. Charlie Russell had some serious insights about how this might be possible." ― Bill McKibben, author of, among many others, Falter: Has the Human Game Begun to Play Itself Out?

"With poetry and grace, Gay Bradshaw calls us into the magical mission of Charlie Russell’s life, mutual friendships with bears, taking us back to long-standing attitudes of Indigenous peoples who live in peaceful co-operation with wild animals. Charlie is a role model for loyalty to nature, human humility and wholeness. Bradshaw shares the warmth of his soul with us, a treasure of inspiration for those who hear the whispering calls of nature and yearn for more connection." ― Darcia Narvaez, Professor of Psychology, University of Notre Dame; author of Neurobiology and the Development of Human Morality: Evolution, Culture and Wisdom

"At a time of climate crisis and environmental emergency, when the flaws in our relationship with nature now clearly threaten our very existence, this book is a must-read." ― Kevin Van Tighem, author of Bears Without Fear

"Too often maligned and dismissed, Charlie Russell was a maverick who made the world a better place for both bears and people. Bradshaw’s latest book is a joy to read and the paean Charlie deserved." ― Jeff Gailus, author of The Grizzly Manifesto

"Charlie Russell defines legend. From the first time I met him 30 years ago deep in the rainforests of northern British Columbia I have remained in awe of his epic and extraordinary life’s journey to understand bears. His astounding immersion into our planet's wildest bear havens will forever be considered the most insightful and ground-breaking bodies of work to reveal the true nature of bears. A giant of a man that will be enshrined in our history as one of the greatest explorers and wildlife conservationists of our time." ― Ian McAllister, executive director of Pacific Wild and author of Great Bear Wild

"Charlie Russell changed how we see and work with bears by reframing the conversations around compassion, respect and coexistence. G.A. Bradshaw's conversations with one of North America’s foremost bear conservationists shares stories and anecdotes and introspectively examines the human/bear relationship in Alberta and Russia. Talking with Bears is an intimate account of how Charlie saw the world that will prompt you to examine your own relationship with nature and how that shapes your world." ― Sarah Elmeligi, PhD and co-author of What Bears Teach Us

"In the end, one can’t help but come away from reading Talking With Bears feeling inspired and rejuvenated..." ― John E. Marriott, co-author and photographer of What Bears Teach Us and The Pipestone Wolves

“The peoples of history in America, Europe and Asia made a special place for bears in their mythologies and stories. For millennia, bears were venerated by those who shared the landscape with them. My brother Charlie was on the same page. In Talking with Bears, Gay Bradshaw presents Charlie’s philosophy in a sensitive and accurate way.” – Gordon Russell

"Talking with Bears is a stunning, original and mind-changing book. Gay Bradshaw has the rare intelligence able to meet and give voice to Charles Russell’s true, courageous and determined relationship with bears. And also this is a manual, an essential text, for teaching us how to live as true human beings. The two themes, living in right relationship with the natural world and refusing the violent instincts of contemporary life, provide a footpath to avoid extinction. A must read for us to survive." — Deena Metzger, author of, among many others, the novels La Negra y Blanca (winner of a PEN Oakland award for Literature) and A Rain of Night Birds; co-editor of Intimate Nature: The Bond Between Women and Animals