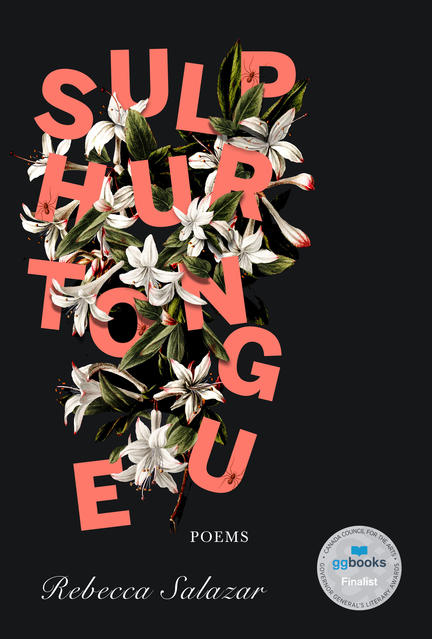 An urgent, powerful examination of place and the ways in which all kinds of identities exist and collide.

The poems in sulphurtongue ask how to redefine desire and kinship across languages, and across polluted environments. An immigrant family scatters over a stolen continent. Oracles appear in public transit, and online. Bodies are transformed by nearby nickel mines. Doppelgangers, Catholic saints, and polyamorists alike pass on unusual inheritances. Deeply entangled in relations both emotional and ecological, this collection confronts the stories we tell about gender, queerness, race, religion, illness, and trauma, seeking new forms of care for a changing world.

REBECCA SALAZAR (she/they) is a writer, editor, and community organizer living on the unceded territory of the Wolastoqiyik. Salazar is the author of two chapbooks, and her first full-length collection sulphurtongue (McClelland & Stewart) was a finalist for the 2021 Governor General’s Award for Poetry

Praise for sulphurtongue and Rebecca Salazar:
“‘Childless Offspring,’ a poem that appears early in the collection, captures the essence of sulphurtongue: ‘one foot slipping on banana peels / and one foot firmly in the grave.’ Salazar’s writing is slippery in its play and firm in its execution of language. Salazar is referential, reverential, irreverent in their engagement with the violence this world puts upon so many of us, that this world has put on them. It’s in the noticing of Salazar’s noticing that I notice the way secrets move these poems, and how these poems move through secrets. The imagery and language of landscapes enhances this quality: ‘cryptoecology’ ‘acid rain’ busses, planets, skin conditions—there is mystery to the cause and effect of the everyday considerations these poems hold. In sulphurtongue, secrets are embodied within ecosystems big and small.” —Trynne Delany, The Puritan

"Rebecca Salazar's poetry is a life-preserver in a sea of prejudice, pain, and confusion. Her words sing us back to what's essential: truth, often cutting but always necessary, and beauty, found in the least likely of places." --Alicia Elliott, author of A Mind Spread Out on the Ground
"The sprawling visionary heft of sulphurtongue recoils the diluted senses of earth and skin, sex and sulphur dioxide, queerness and religion, and more to reveal their deeper labyrinths of meaning. The singular power of this work rests not only in its wholly mature command of the craft, but in how Salazar’s sulphurtongue is a burning votive towards a world where the warped silos of history’s personal, ecologic, and collective toll gather toward a new imagining. A shimmering, head-long, heart-spin of a debut." --Canisia Lubrin, author of The Dyzgraphxst

Poetry That's Going to Grab You

Great books to read before for National Poetry Month is out.