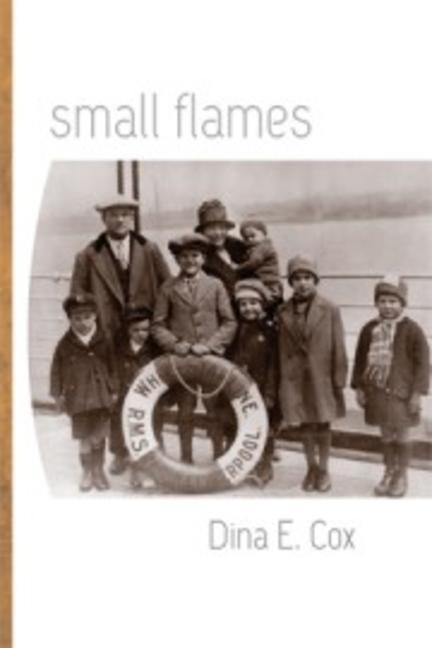 small flames is, like its title poem, an arrangement of lambent coals which brighten their hot cores under the breath of the reader’s gaze. Quiet, contained poems flare up with the intensity of peak experience – in moments of childhood, womanhood, birth, death and the infinite in a cormorant’s flight or Chaucer’s tomb. Dina E. Cox has the extraordinary gift of having begun to write seriously only after her children had grown, and yet writing as though she were in her twenties – youthful energy, enthusiasm and passion seasoned already with mature wisdom. small flames is a story of beginnings, endings, and of new beginnings. While small flames has not a single stand-alone haiku in it, the poet is schooled in the form and has published haiku as far away as Bulgaria. Even in the extended pieces, there’s hardly a formally Japanese poem here, but each, stanza by stanza in the longer ones, enacts the grace, precision and poignancies of highly disciplined verse. In the title poem, a sun-warmed field of lupins / burns as brightly, peppering / the transparent air with pungent /colour … In “The Gift,” where she’s present at the hospital when her father receives a diagnosis of the cancer which will end his life, After the doctor leaves / I search for something / concrete to hold onto: / in silence I soap each / of my father’s leathered soles, / awed by the intimacy / of fingers and toes, / and by his acceptance / of this macabre dance. These are the poems of a woman who has known in her life most things we all know, but has seen further than many of us are given to see.

Dina E. Cox is a writer and musician, and now an empty nester, living with her husband, David, in a northern suburb of Toronto; several children, and a Biblical number of grandchildren, live near enough for frequent visits. Dina was born to parents of straitened means in postwar Saint John, N.B., but the family’s fortunes improved and she went on to the University of New Brunswick, then taught high school in the province before marrying. As a B.A. English (Hons.) and neophyte writer she devoted herself to her husband and children, not returning to her pen until they were all grown.

Dina Cox’s poems have appeared in periodicals as diverse as The Antigonish Review, tempslibre, The Cormorant, CV2, Room and Simply Haiku, and have been published in Canada, the U.S., Ireland, and Bulgaria. She has also won numerous awards, including the Betty Drevniok Award from Haiku Canada, the nation’s premier award for English language poetry in that form. small flames is her first book.

the house where death has entered is quiet is noisy

too many voices too many whispers accusing not yet comforting

from the kitchen where words are not spoken, an odour of dinner turned low and the silence of a widow still unsure how to wear her new clothes

His Felt Cap Between monitor and keyboard it rests lightly on my Oxford New Thesaurus for the 1990s, wordless for all that, his felt camel-coloured cap.

Some might deem it shabby yet it musters the shape of his head, how it crowned, tilted; I remember that he wore it jauntily, askew.

Thus it sat on the head of such a man, my father — serious, worried, perfunctory, a man who gave commands, expected results. How many times it warmed his head, taking shape from his particular synthesis of bone, hair and grey matter… aged in the swirl of cigarette smoke and a widower’s portion.

On his seventy-fifth birthday we went to Market bought cheese, breathed deeply past stands of dulse (quietly remembering my mother’s love of it) and freshly harvested seafood, swallowing the old salt aroma of primal spawning grounds…

Finally we found the soft ice cream stand. A peacock strutting, he made much of choosing from 24 flavours, my father who never enjoyed shopping now playing at it with his only daughter.

A benediction borrowed from ancient cathedrals, light found his cap, settled on it, transformed it. I remember how he came alive for me that day, his felt cap drawing rays to itself as the sun draws water.

I imagine your room, the big window facing south, the cold brightness of winter opening up, the bed you adjust yourself

I imagine friends family and others visiting you, palliative care workers keeping the background

This is the room where you will die, it is not home but you are surrounded by love; I imagine

your morphined mind looking for a balance, groggy, your mind that was always exact, your ready wit

I imagine you in that homely room become the paradox as you always did?—?grateful, still asking the questions

I cannot imagine a world without you, focus instead on that window facing south, imagine you asking someone

she moved me, made me move my legs to cross it one more time,

then my mother was gone forever. I can still feel my legs moving, not of their own volition.

II After my father died, the warmth of his hand in mine, I sat beside him for a long while, just sat there, and it was enough.

Orphaned, I shook hands with the stranger I had become, and so prepared myself for the rest of my life.

III In the beginning the Word became flesh. Now only words remain.

I imagine their souls as I search to name

the faces of memory, to illumine the language of my dead.