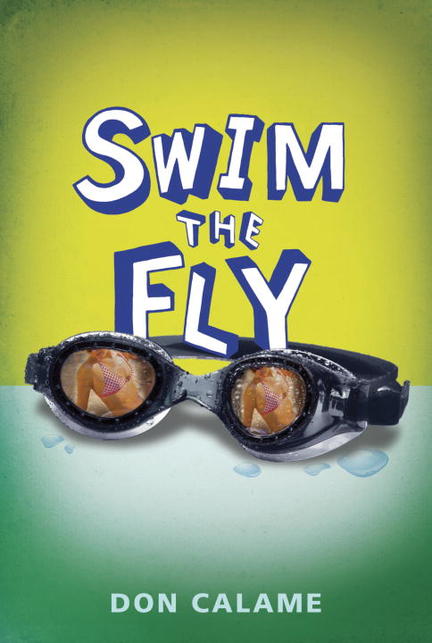 Three adolescent boys with a single goal: see a real live naked girl. The result? Razor-sharp, rapid-fire, and raunchy, of course. And beyond hilarious.

Fifteen-year-old Matt Gratton and his two best friends, Coop and Sean, always set themselves a summertime goal. This year's? To see a real-live naked girl for the first time — quite a challenge, given that none of the guys has the nerve to even ask a girl out on a date. But catching a girl in the buff starts to look easy compared to Matt's other summertime aspiration: to swim the 100-yard butterfly (the hardest stroke known to God or man) as a way to impress Kelly West, the sizzling new star of the swim team. In the spirit of Hollywood’s blockbuster comedies, screenwriter-turned-YA-novelist Don Calame unleashes a true ode to the adolescent male: characters who are side-splittingly funny, sometimes crude, yet always full of heart.

Don Calame has been a professional screenwriter for the past fifteen years. Among the films he has had produced are Employee of the Month and Hounded. Swim the Fly is his first book. He lives in Los Angeles.

"Been there, done that," Sean says.

"Screw you, meat stain. I haven’t done that since I was, like, two, okay. And that’s not what I was talking about," Sean says.

We’re walking up to the pool. Cooper, Sean, and me. Bare feet tucked into untied sneakers, ragged towels draped around our necks. It’s our first day of swim practice, which means that summer’s really started. We’ve been friends since kindergarten. We’ve been on swim team since third grade. The Rockville Swimming Association. Six years as Lower Rockville Razorbacks.

"He’s talking about Tina Everstone’s left boob," I say as we turn onto Maple Drive and walk along the curb.

"Oh, please. Not that again." Cooper rolls his eyes.

"It’s true. I saw the whole thing when she was taking off her sweatshirt during gym. Her T-shirt came up just enough"

"And she wasn’t wearing a bra and her left one popped out and you saw the entire thing, nipple and all, and even if I didn’t think you were lying to us, it still wouldn’t count," Cooper says. "I’m talking totally naked. Not a quick flash, okay?"

"Whatever." Sean shrugs and looks off at the rundown ranch houses like he doesn’t care what we think.

"How are we supposed to see a live naked girl?" I say. "Maybe we better set a more realistic goal for the summer. Like finding Atlantis."

Every summer there is a goal. It’s tradition. I don’t remember when it started or why. But as long as I can remember, we’ve always come up with something we had to accomplish before the start of the new school year. When we were ten, it was riding our bikes fifteen miles away to Perry Lake and skinny-dipping. When we were twelve, it was going to the Fern Creek Golf Course every day until we collected a thousand golf balls. Over the past few years, the goals have become more centered around girls and sex. Two years ago, each of us had to get our hands on a Playboy and show it to the others. Last year the ante was upped to finding an illegal password for a porn site. And now, Cooper’s challenge for this summer. Which I can’t see ever happening.

Maybe if we were even a little bit cool, or had any chance of getting girlfriends. But that’s just not the case. By the time you’re fifteen, you’ve either had a girlfriend — maybe even had sex — or, like Coop, Sean, and me, you haven’t even mustered the courage to ask a girl out. There’s also a third group, I guess. Guys who say they’ve had girlfriends but who nobody really believes. Which just means they’re liars who fit into the second category.

We make it to Rockville Avenue Pool just in time to hear Ms. Luntz, our swim coach, calling the team over for a meeting. Ms. Luntz is a gourd-shaped woman who wears her blue-and-white Speedo stretched to capacity underneath denim short-pants overalls. Her legs are thick and pockmarked, and purple worm veins bubble up beneath the see-through skin on her thighs. She doesn’t make things much better for herself with her Campbell’s Soup Kid haircut and gigantic pink-tinted glasses. You could almost feel sorry for her, if she wasn’t so nasty to everyone.

Cooper, Sean, and me make our way around "the toilet" — a shallow, oval kiddie pool that’s always suspiciously body-temperature warm. My mom says it’s warm because there’s less water in there and the sun can heat it up faster, but nobody’s buying that. Last year, Cooper bet Sean ten bucks he wouldn’t bob for a Life Saver over the painted picture of Elmo, which is where most of the little kids hang out, and Sean did it without blinking an eye. It was pretty sick. Sean kept saying how they put chemicals in the pool for a reason, but there’s no way I could have done that. I feel my stomach lurch now just thinking about it.

We walk along the edge of the adult pool toward the deep end where the diving boards are. I breathe in the sharp chlorine smell and watch the swimmers stringing the swim lane dividers, and it’s like "Yeah, I know this" mixed with "Oh, God, not this again."

We hang back at the edge of the crowd that forms around Ms. Luntz. It’s all the same people from last year. A sea of blue and white Lycra. Guys and girls from seven to seventeen. All of them serious about swim team.

It’s different for Coop, Sean, and me. We do swim team because we’ve always done swim team. Between the three of us, I bet that we have the largest collection of green fifth-place ribbons in the entire league. It’s not like we try to lose. It’s just that we happen to be the three least athletic kids on the team. Maybe even in all of Rockville.

"Okay, so, welcome back and all that crap," Ms. Luntz says, tapping her pen on her clipboard. "It’s another summer, which means another chance to make a run for gold. Our first meet is in three weeks. I want us to set the bar high right away. I want us to take first in this year’s relay challenge."

Coop leans over to me and whispers, "Yeah, and I want to take a whipped-cream bath with...

Other titles by Don Calame

Booksellers' Picks for Tweens and Teens 2013