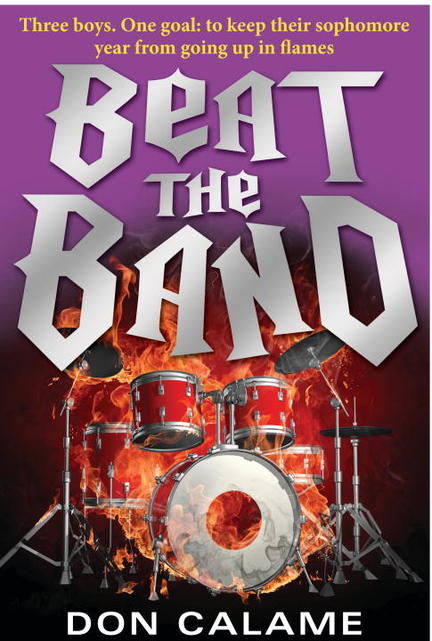 Get ready for riffs on hot girls, health class, and social hell! The outrageously funny boys from Swim the Fly return to rock their sophomore year.

In this hilarious sequel to Swim the Fly, told from Coop’s point of view, it’s the beginning of the school year, and the tenth-grade health class must work in pairs on semester-long projects. Matt and Sean get partnered up (the jerks), but Coop is matched with the infamous "Hot Dog" Helen for a presentation on safe sex. Everybody’s laughing, except for Coop, who’s convinced that the only way to escape this social death sentence is to win "The Battle of the Bands" with their group, Arnold Murphy’s Bologna Dare. There’s just one problem: none of the guys actually plays an instrument. Will Coop regain his "cool" before it’s too late? Or will the forced one-on-one time with Helen teach him a lesson about social status he never saw coming? With ribald humor and a few sweet notes, screenwriter-turned-novelist Don Calame once again hits all the right chords.

Don Calame is a screenwriter whose film projects include Employee of the Month and Hounded. Of his many prior occupations, he says his most satisfying was teaching elementary school for four years in Los Angeles. Swim the Fly was his debut novel. He lives in British Columbia.

THIS IS IT, DAWGS," I say. "From boys to men. Tenth grade is the year we tag all the bases. First, second, third, and then we slide into home."

"I'd just be happy to step into the batter's box again," Sean says.
I shoot him a gimme-a-break look. "Don't be so mopey, dude. Tianna was just a practice swing. Now you're primed to aim for the fences."

Me, Matt, and Sean shortcut across Dreyfus Park, our bikes kicking up the dust that settled over the summer as we head toward the beige brick building of Lower Rock- ville High that looms like a penitentiary. A penitentiary chock with hotties, to be sure, but a lockup for most of the daylight hours, nonetheless.

I laugh. "Are you kidding me? They were only going out for a month. A week is more than enough time to get over it. It's standard formula: One day of angst for every week you were dating. Four weeks, four days. Over and out. Any more time is just a wank."

Matt looks at me in disbelief. "Where do you get these things?"

"It's common knowledge, dude. Google it." "What do I do if I see her in the hall?" Sean asks. "What do you mean, if “" I say, pumping the pedals on my creaky mountain bike, feeling the strain in my legs as we split the goalposts and ride over the football field. "You are going to see her in the hall. She might even be in a bunch of your classes. Who gives a crap?"

"No." I glare at Matt. "Wrong. Do not take advice from the Whipped One." I turn to Sean. "You say nothing. She dumped you, so she no longer exists. Simple as that."

I sigh, exasperated. "Look, Sean. You're a changed man. We all are. This past summer was epic. Look at all we accomplished. Our first party, yours and Matt's first girlfriends, Matt kicking ass in the butterfly, seeing our first naked babe -"

Sean cringes. "Please. Do not bring that up ever again.
I'm still having nightmares about Ms. Luntz threatening to suffocate me with her gargantuan gazongas unless I swim a thousand laps."

"What I'm trying to say is, you're no longer wet behind the ears.Tianna breaking up with you is the best thing that could have happened. I mean, seriously, why would you want to waste the best years of your life tied to just one babe? No offense, Matt."

"Why would I be offended?" Matt says. "It's not like me and Valerie are getting married."

"Sean-o? A little backup here. Matthew is, in fact, carrying Valerie's baby, is he not?"

"Leave me out of it," Sean says, the wind whipping his hair.

I raise my eyebrows at Matt, like "Need I say more?" "Jealous much?" Matt says.

"Oh, yeah, without a doubt. Green as hell. Aren't we, Sean? We'd love to have to ask permission anytime we want to do something. And be dragged to every chick flick that comes out. And have to drop everything when- ever our 'honeykins' calls."

Matt shakes his head. "Everything you just said is total bullshit. And you know it."

Matt rolls his eyes. "Yeah, you guys have really matured this summer. It's staggering."

We hop the curb into the student parking lot and pedal toward the bike racks. The lot is already full. I don't have my driver's license yet - another thing I need to get started on this year - but everyone knows that if you want to nab a parking space you have to get to school at least twenty minutes early. We pass my sister Angela's car, recognizable by the fact that it's the only one in the lot with a car cover. It's her sickness. One of many.

"Look, Matt," I say. "You're acting like we think it's a bad thing. So, Valerie's got a tight grip on your Mr. BoDangles. At least you're getting some. Some of what, I'm not sure. But you seem comfortable with the trade- off. Personally, I wouldn't be. And I'd be lying if I said Sean and I don't miss you sometimes. But we get by. Don't we, Sean?"

Sean says nothing. Jesus, I hope he's not going to use this Tianna thing as an excuse to be such a soggy turd all year long.

The three of us coast up to the bike racks and leap off our bikes.

"All I'm saying is, we have an opportunity here." I pull a key from the pocket of my jeans, unlock my bike lock, and unravel the chain from around the seat post. "Our summer goal was a success. We saw a live naked -"
"Hey!" Sean shouts, waving a yellow coil lock at me like a weapon. "Did I not just ask you never to bring that up again?"

"Would you stop it with that stupid theory of yours?" Matt says. "You wouldn't know the natural order of things if it crapped on your head."

Sean snickers. I ignore him and give Matt a you-can't- be-serious look. "Correct me if I'm wrong here, Matt. Maybe I shouldn't be including you with me and Sean. Maybe you've already rounded all the bases. If you have, just say so."

"I couldn't stop laughing at this book. Cooper may be the most unlikely (and yet thoroughly likeable) hero you'll ever find yourself rooting for." — Meg Cabot

Other titles by Don Calame