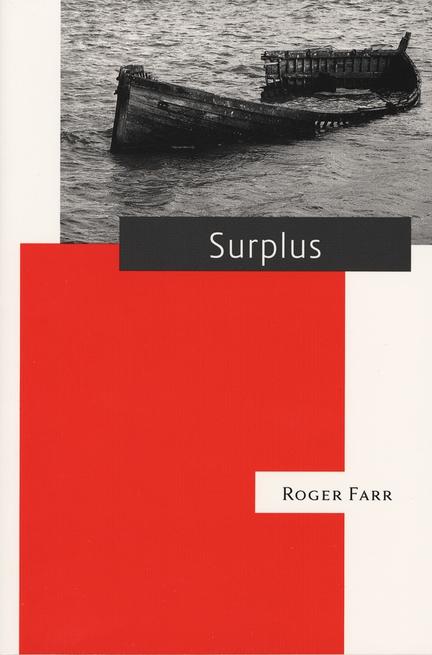 "Roger Farr appropriates the sonnet to investigate, directly address, and to map the rolling geographies of global capitalism, and its even meaner, sharper–toothed offspring, neolliberalism. A global poetics of place materializes in Surplus as Farr lays out and points to with disgust, amazement, and critique the very processes by which capital makes its demands for greater surplus at this historical moment. The question Farr pointedly asks through this poetics is both intensely social and aesthetic: How can the technique for art 'to make the known / Unfamiliar,' work in a time when the very processes that buffet everyday life and rasp social reproduction are made immaterial? How can the immateriality and abstraction of surplus capital be defamiliarized? How can the very material and active dispossession of common goods and public spaces, of centre cities, of water, of pensions, of DNA, and of the future be "laid bare" before they are even adequately named? Surplus is embedded into a vital moment of poetry and poetics in North America where the very conditions that culture (and history are produced under ––– the astonishing meanness and destructiveness of neloliberalism ––– calls daily for a poetics to roughen up the surface of the present and to ask the fundamental questions concerning where social change has and will come from. Surplus is an important book in the growing cultural front."
––– Jeff Derksen
".. . a poet of great heart and aesthetic / politcal commitment, constitutive of a fierce sincerity. He descends like Orpheus into the dorkish aleatorical yet never remains walling in an opportunistic rhetorical stage. 'Tis a Farr, Farr better thing he do."
––– Dorothy Trujillo Lusk

A former member of the artist–run Kootenay School of Writing collective, Roger Farr's critical writing on avant–garde poetics and radical social movements has appeared in Anarchist Studies, Armed Cell, Fifth Estate, Perspectives on Anarchist Theory, The Poetic Front, West Coast Line, and XCP: Cross Cultural Poetics. He edited the three–volume anthology Open Text: Canadian Poetry and Poetics in the 21st Century (2008–2013), and was Critical Editor for Alice Becker–Ho's The Essence of Jargon: Argot & the Language of the Dangerous Classes (2015). Currently he is editing The Amourous Comrade, a collection of writing on anarchist sexual politics by É. Armand. A book of variations based on the writing of 15th century poet François Villon is also forthcoming. He is Convener of Creative Writing at Capilano University in Vancouver.

Other titles by Roger Farr

I Am a City Still But Soon I Shan't Be