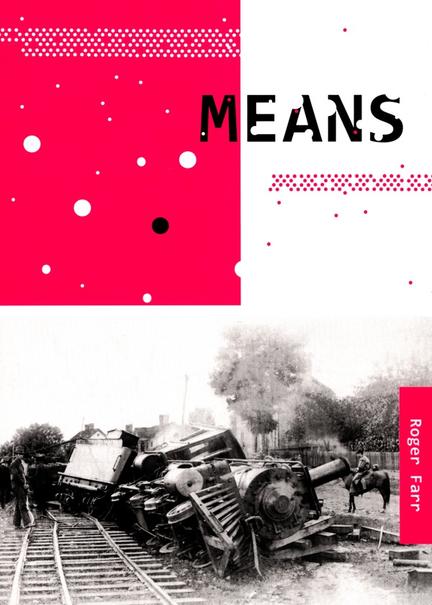 Means extends the inquiry begun in the author's first book Surplus (2006) by shifting terrain from the industrial to the immaterial, while hitting pause on the means of communication and opening lines to new means of resistance to capitalist hegemony.

A former member of the artist–run Kootenay School of Writing collective, Roger Farr's critical writing on avant–garde poetics and radical social movements has appeared in Anarchist Studies, Armed Cell, Fifth Estate, Perspectives on Anarchist Theory, The Poetic Front, West Coast Line, and XCP: Cross Cultural Poetics. He edited the three–volume anthology Open Text: Canadian Poetry and Poetics in the 21st Century (2008–2013), and was Critical Editor for Alice Becker–Ho's The Essence of Jargon: Argot & the Language of the Dangerous Classes (2015). Currently he is editing The Amourous Comrade, a collection of writing on anarchist sexual politics by É. Armand. A book of variations based on the writing of 15th century poet François Villon is also forthcoming. He is Convener of Creative Writing at Capilano University in Vancouver.

Other titles by Roger Farr

I Am a City Still But Soon I Shan't Be