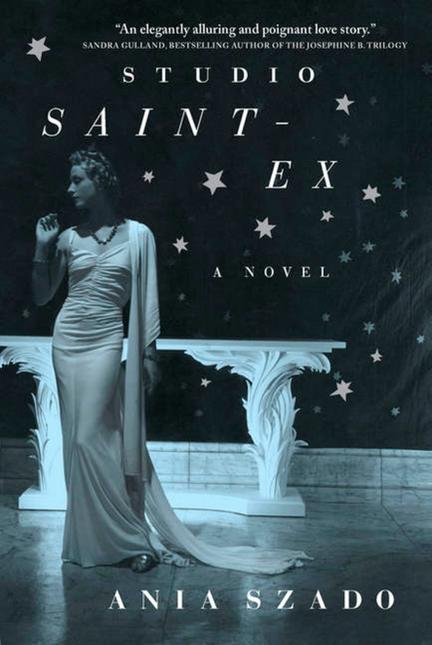 In the Glittering world of Manhattan's French expats and 1942 Quebec, a twenty-two-year-old fashion designer on the cusp of launching her career is swept away by the charms of French writer and war pilot Antoine de Saint-Exupéry ... and enmeshed in the schemes of his beautiful, estranged Salvadoran wife, who is determined to win back her husband—at all costs and seductions.

With Paris under occupation by Hitler's troops, New York's Mayor LaGuardia vows to turn his city into the new fashion capital of the world—and Mig Lachapelle leaves Montreal for New York to make her name. She finds herself pulled into a fiery romantic triangle in which ambitions, creativity, and passions catch a literary giant between two talented, mesmerizing women and imperil the fate of his work-in-progress, The Little Prince—a poignant tale of a young boy's loneliness and love among the stars, one of the best selling and most beloved novels of all time.

Ania Szado’s novel Beginning of Was was shortlisted for the Commonwealth Writers’ Prize (Best First Book, Canada/Caribbean), nominated for the international Kiriyama Prize, and was named a NOW magazine Top Ten book. She lives in Toronto.

"A ravishing glimpse into the early days of American haute couture and into the private life of one of the 20th Century’s most notorious authors. Ania Szado’s writing is nothing less than sublime." - Alison Pick, author of Far to Go

Ania Szado has created a fascinating time and place and his risen wonderfully to the challenge of portraying real historical characters in fiction- bravo! - Annabel Lyon, author of Giller prize-nominated The Sweet Girl
Ania Szado has written a novel that is so true and so right that it makes you wonder why nobody has written it before. Studio Saint-Ex is like an ocean undertow: I fell in and could not get out except by gorging on the story as it pulled me toward the final sentence. Studio Saint-Ex is an unputdownable novel about twentieth century fashion, French expatriates in Manhattan during World War II, the miracle of creative genius and the lives of the great writer Antoine de Saint-Exupery and the women he loved. Open the first page and prepare to fall. - Lawrence Hill, bestselling author of The Book of Negroes
Studio Saint-Ex by Ania Szado is an elegantly alluring and poignant love story. Nuanced, written with intimacy and immediacy, it's a fascinating account of the evolution of the classic children's novel The Little Prince framed by the complex relationships of the French writer/war hero Antoine de Saint-Exupéry, his formidably manipulative and fiercely sensual Latin wife, and the young, talented Canadian fashion designer who captivates them both. Spare and beautifully-crafted, the novel vividly evokes the world of fashion design and the French ex-pat community in New York during WWII. In a word: magnifique! - Sandra Gulland, author of Josephine B trilogy and Mistress of the Sun
"Rich in observations, beautifully rendered, Studio Saint-Ex is a complex study of troubled love, overriding ambition, and the miracles of creativity. Ania Szado has written a mesmerizing book." - Eva Stachniak, bestselling author of The Winter Palace
In Ania Szado's lyrical novel, the characters are pulled between worlds; France and America, high fashion and wartime austerity, the allure of flight and the magic of the written word. Studio Saint-Ex is at once seductive and brimming with the restless energy of World War II New York. It, like its characters, takes wing through a dark uncharted night, in order to deliver great beauty. - Vincent Lam, Giller Prize Winner and author of the bestselling novel The Headmaster's Wager
Studio Saint-Ex is an imaginative, sensual exploration of the creation of Antoine de Saint-Exupery’s The Little Prince, set in a moodily evocative 1940’s New York. In depicting the breathtaking collision between desire and art, passion and inspiration, Szado spins a tale that will make you view this beloved classic in an entirely different, and very surprising, way. - Melanie Benjamin, author of The Aviator's Wife
“Set amid dazzling wartime Manhattan, this fictionalized story about a love triangle involving the author of the beloved tale The Little Prince is captivating.” - Chatelaine
“Szado’s exploration of what it takes to bring art – whether it’s de Saint-Exupéry’s fiction, specifically The Little Prince, or her fashion – into the world is insightful, even inspiring at times….this is one entertaining book” - NOW Magazine
“[A]n engrossing and meticulous character study of a man who was part philosopher, part risk-taker and wholly romantic.” - Toronto Star
“[A] conscientious and imaginative work written with style and grace…. thoughtful, elegant and satisfying on many levels” - Winnipeg Free Press

Other titles by Ania Szado

Canadians Writing About the US