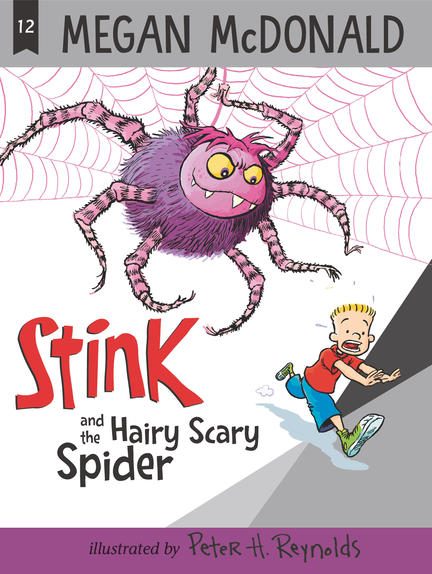 “Hand this to fans of the Stink series or any spider-loving early reader.” —School Library Journal

Creepy! Crawly! Criminy! Everyone knows that Stink is bonkers about most scientific things. But there’s one exception: dangle a spider in front of him and he goes berserk! Stink is so freaked out by spiders that he can’t look at them. He can’t think about them. And he for-sure can’t touch them! Stink has arachnophobia and he has it bad. But when a hairy backyard emergency arises, Stink is forced to face his fear—and eight beady eyes—head-on. Will he manage to tame the heebie-jeebies, or will he remain stuck in his web of terror? Arachno-fans will love the comics sprinkled throughout with facts about spiders as well as a hands-on origami challenge.

Megan McDonald is the creator of the popular and award-winning Judy Moody and Stink series for older readers. She is also the author of three Sisters Club stories, two books about Ant and Honey Bee, and many other books for children. Megan McDonald lives in California with her husband, the writer Richard Haynes.

Peter H. Reynolds is the illustrator of the Judy Moody and Stink books, the author-illustrator of The Dot, Ish, Sky Color, So Few of Me, The North Star, Rose’s Garden, The Smallest Gift of Christmas, and Playing from the Heart, and the illustrator of many other picture books. Born in Canada, he now lives in Dedham, Massachusetts.

Other titles by Megan McDonald

Stink and the Ultimate Thumb-Wrestling Smackdown

Stink and the Midnight Zombie Walk

Stink and the Attack of the Slime Mold

Stink and the Freaky Frog Freakout

Stink and the Shark Sleepover

Other titles by Peter H. Reynolds

Love You by Heart

Our Table (Digital Read Along Edition)