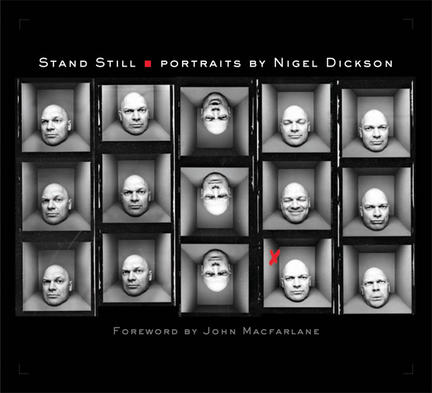 International award-winning photographer Nigel Dickson has produced some of the most provocative portraits, capturing a diverse and eclectic range of personalities, some famous, some not so famous, but all equally arresting. From Pierre Elliot Trudeau, William Borroughs, and Michael Bublé to Governor General Michaelle Jean, Anne-Marie Macdonald, and Martha Stewart, Stand Still showcases the best portraits of Dickson’s professional career, made famous by such publications as Rolling Stone, Toronto Life, Saturday Night, Details, Esquire, Fortune, and Time magazine. Highlighted will be Dickson’s “Canadian Series,” a cross- section of everyday Canadians from coast to coast doing everyday things. Photographed for Saturday Night magazine in the early 1980s, the series would cement Dickson’s growing reputation and unique style of photography. The book also features a foreword by John Macfarlane, editor of Toronto Life magazine; an extensive introduction, outlining the author’s life and times, and also offers anecdotes and real behind-the-scenes experiences that are funny, insightful and sometimes difficult and disastrous, giving the reader a rare glimpse into the life of the photographer and his relationship to his subject. Stand Still is both a celebration of Nigel Dickson’s 30-year career and a testament to his contribution to the world of photography. “When I saw this book of Nigel’s, I immediately wanted to take it home. I wanted to possess the people in it, because somehow Nigel caught some charismatic essence of each one of his subjects that made them irresistible even when they were scary or ridiculous or too intense to be consumed. I still want it, and want them.” -David Cronenberg “I could say he has the eye of a hawk, that he has a gimlet eye, the eye of a spy, but then no one sees as Dickson sees; his eye is his own eye entirely.” -Barry Callaghan

NIGEL DICKSON is an international award-winning photographer whose work has been published by such magazines as Toronto Life, Details, Esquire, Saturday Night, Forbes, Business Week, The Globe and Mail, Rolling Stone, Time, Newsweek, Fortune, Weekend, Chatelaine, and Fast Company. He has won 16 National Magazine Awards (the most awarded to any artist in the Visual Design category’s history), 25 Art & Design Club Canada Awards, two international ANDY Awards, the Les Usherwood Award for Lifetime Achievement from the Art & Design Club of Canada, and a handful of others in both Canada and the United States. He lives in Toronto, Ontario with his wife and two children.

Other titles by Nigel Dickson

Painting the Canvas of a City