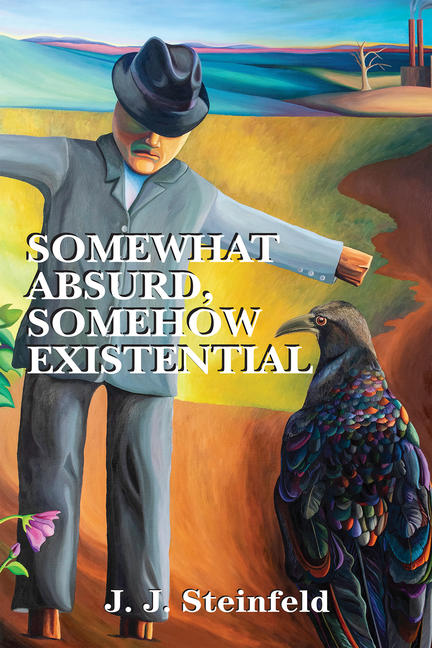 Through these far-reaching and searching poems, J. J. Steinfeld’s work continues to not only orbit a multitude of realities and multifaceted worlds, but to interrogate various aspects of being, whether they appear as the worldly or the otherworldly, the ordinary or the extraordinary, the physical or the spiritual. As Steinfeld concludes in his poem “The End of the World,” somewhat confronting the absurd and somehow embracing the existential: “I want a poem with a good ending / all the thoughts and uncertainties / and missed opportunities / tied together with metaphoric hope / even if that poem is about the end of the world / preposterous and ludicrous / as it might be.”

J. J. Steinfeld brings both intellectual naughtiness and wry rigour to his seriously playful philosophical questioning in Somewhat Absurd, Somehow Existential—his seventh collection of poems. These are pieces that probe magic and mystery, faith and fancy, Heaven, immortality, God and metaphoric hope alongside death sentences and “Existential Texting,” in language that is unafraid of its own bounty and imaginative edge.

To enter into a Steinfeld poem is to enter into a world of the fabulist, of conundrums, magical sleight of hand, elegant allegories, and cautionary tales, sometimes dire, sometimes comedically ironic. But make no mistake: beneath this “dialogue with mystery” of this world and the otherworldly, there is an essentially humanistic voice searching for answers to the big questions against seemingly unfair odds—a commuter contemplates love and time on a bus ride; a woman opens the urn containing her husband’s ashes; an elderly man watches old sci-fi films in a seniors’ home and laughs because “they got it all wrong / not even close / those silly, silly, Earthlings.

Other titles by J.J. Steinfeld

Acting on the Island

And Other Prince Island Stories, New and Selected

Gregor Samsa Was Never in The Beatles

A Visit to the Kafka Café

Absurdity, Woe Is Me, Glory Be

An Unauthorized Biography of Being

Madhouses in Heaven, Castles in Hell

Would You Hide Me?