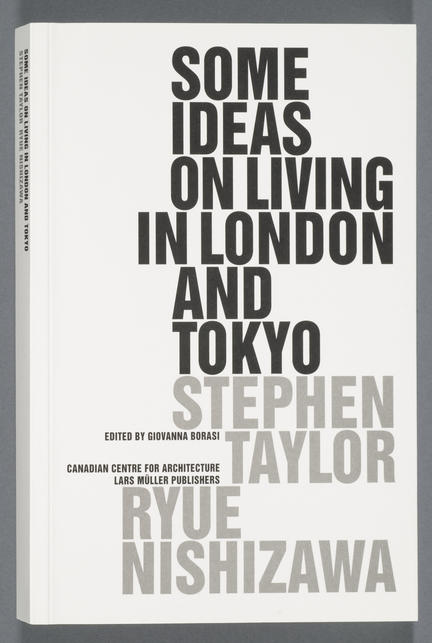 Part of the CCA's exploration of key issues in contemporary architecture with a specific focus on urban, social, and environmental concerns, Some Ideas considers a vital issue for today's society, namely, the question of how to create viable new models for living in increasingly dense urban environments. The projects of the British architect Stephen Taylor and the Japanese architect Ryue Nishizawa both respect and respond to the particular cultural environments of London and Tokyo, and demonstrate the importance of a clear understanding of place in order to develop solutions that are specific to their context. This publication marks an important contribution to ongoing research in the field, and offers new reflections on how we can perceive, engage, and inhabit the contemporary city. The book features evocative images of the architects' projects, including site models and installations, alongside comments by Nishizawa and Taylor on individual projects.

Giovanna Borasi is an architect, editor, and curator. She joined the Canadian Centre for Architecture (CCA) in 2005 and has been the director of the CCA since January 2020. Borasi’s work explores alternative ways of practicing and evaluating architecture, considering the impact of contemporary environmental, political, and social issues on urbanism and the built environment. She studied architecture at the Politecnico di Milano, worked as an editor of Lotus International (1998–2005) and Lotus Navigator (2000–04) and was the deputy editor in chief of Abitare (2011–13). One of Borasi’s latest curatorial projects is a three-part documentary film series that reconsiders architecture’s relationship to and understanding of home and homelessness, living alone, and the elderly. The first film What It Takes to Make a Home (2019) screened at film festivals and institutions worldwide.

Music from the Sky

The True Story of One Family's Escape From War-Torn Europe

Other titles by Ryue Nishizawa

Other titles by Giovanna Borasi

Sorry, Out of Gas

Architecture's Response to the 1973 Oil Crisis

How travelling fruit, ideas and buildings rearrange our environment