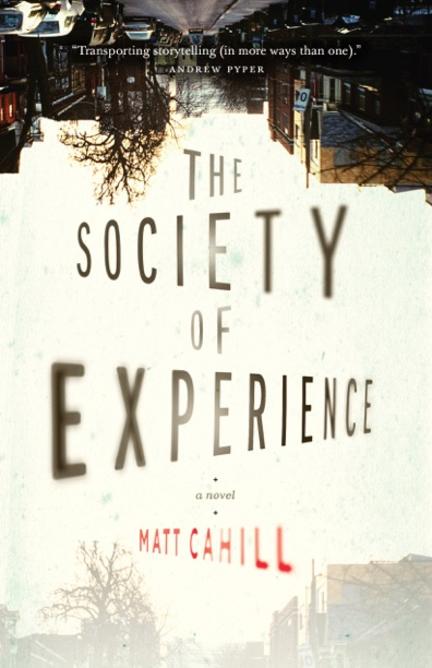 When his father – a distinguished writer – unexpectedly passes away, Derrick van der Lem’s insulated world implodes, leaving it a much stranger and crueller place than the one he knew. In the midst of his downward spiral, the mysterious Society of Experience asks him to take part in a baffling science experiment involving time travel that promises to change his life and pull him out of his rut.

When the experiment begins to untangle, Derrick finds himself out of his depth and in the middle of a nightmare, with only the company of a mysterious woman to steer him from chaos to heartbreak. Meanwhile, who are the Society, and what are their true intentions for Derrick? Is time travel real, or is it yet another contrivance the Society has invented? Part Philip K. Dick, part postmodern mystery, The Society of Experience is an inventive, fast-paced story of a man’s journey through streets, alleyways and deserted buildings in search of a better tomorrow.

Matt Cahill is a Toronto writer. He writes novels, short stories and essays. He’s contributed work to Ryeberg, blogTO and Torontoist. His short story Snowshoe appeared in September 2014 with Found Press. Matt worked for twenty years in the film and television industry before coming to his senses and training to become a psychotherapist. He now has a private practice and is a member of the College of Registered Psychotherapists of Ontario. Matt reads highfalutin books of all sorts, plays intermediate soccer and occasionally drums. Feel free to visit Matt's website, http://mattcahill.ca. You can also follow him on Twitter at @m_cahill.

Excerpt: Society of Experience, The (by (author) Matt Cahill)

I WAS IN TWO PLACES. Half of me sitting up in my bed in St. Mike’s Hospital, early March, waiting for something other than the certainty of my breath and the sound of footsteps outside my door to break the vacuum. Half of me was stuck in January.

The nurse was due; it was seven p.m. I tried to focus on whatever routines were available to me, whatever I could look forward to, as opposed to being whisked into the past. Her green eyes tracking me, wary when we exchanged glances. Being observed wasn’t comforting, especially when it was just the two of us. I remember her dark, short hair, and her tenuous manner, as if figuring out what it was she was supposed to being doing.

Anyone could see what I’d done to myself. It was naive to wish otherwise, though I continued to do so. She’d been pleasant and attended to me efficiently. Sometimes I’d think I was alone, but she would be in the room, snatching glances at me in the mirror.

I’d arrived on a stretcher smeared with blood, unconscious, oblivious to the voices of people shouting out the details of what I’d done. I couldn’t help thinking of the mess waiting for me when I’d get home, and I kicked myself for not being lucid through it all, as if I’d missed out on a good story to tell.

"A swirling confident debut, supported by crisp prose without misstep, and containing many more original ideas than books three times its slender size. Sly and slippery fun – I thought of Ben Marcus and J. G. Ballard . . . writers who say don’t worry I know what I’m doing as they break from the pack." – Tony Burgess, author of Pontypool Changes Everything and The n-Body Problem

"Matt Cahill’s debut novel, The Society of Experience, explores the dangers of magical thinking in a most entertaining way. Both thoughtful and humorous, twisty and fun, this is transporting storytelling (in more ways than one)." – Andrew Pyper, author of The Demonologist and The Damned

Other titles by Matt Cahill

The Society of Experience

Stunning works that didn’t rack up the shortlist spots or awards, but still deserve the spotlight.