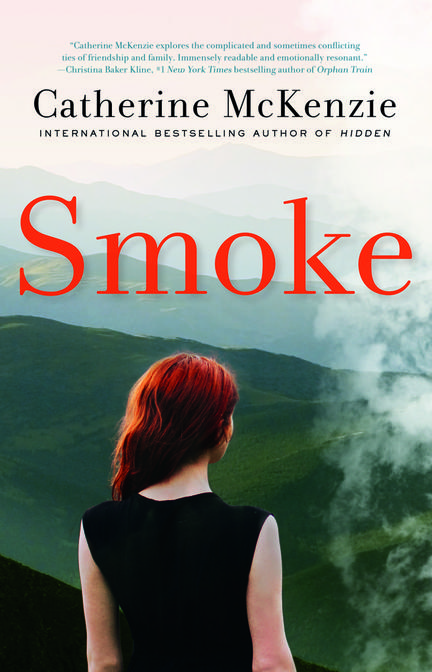 From the internationally bestselling author Catherine McKenzie comes an evocative tale of two women navigating the secrets and lies at the heart of a wildfire threatening their town.

After a decadelong career combating wildfires, Elizabeth has traded in her former life for a quieter one with her husband. Now she works as the local arson investigator in a beautiful, quaint town in the Rockies. But that tranquil life vanishes when she and her husband agree to divorce and a fire in nearby Cooper Basin begins to spread rapidly. For Elizabeth, containing a raging wildfire is easier than accepting that her marriage has failed.

For Elizabeth’s ex-friend Mindy, who feels disconnected from her husband and teenage children, the fire represents a chance to find a new purpose: helping a man who has lost his home to the blaze. But her faith is shattered by a shocking accusation.

As the encroaching inferno threatens the town’s residents, Elizabeth and Mindy must discover what will be lost in the fire, and what will be saved.

Catherine McKenzie was born and raised in Montreal, Canada. A graduate of McGill University in history and law, Catherine practiced law for twenty years before leaving the practice to write full time. An avid runner, skier, and tennis player, she’s the author of numerous bestsellers including I’ll Never Tell and The Good Liar. Her works have been translated into multiple languages and Please Join Us, I’ll Never Tell, and ?You Can’?t Catch Me have all been optioned for development into television series. Visit her at CatherineMcKenzie.com or follow her on Twitter @ CEMcKenzie1 or Instagram @CatherineMcKenzieAuthor.

“Smoke has everything Catherine McKenzie's fans will want from her new novel—beautiful pacing, a thick plot, suspense, characters you'll love, and intricate relationships. In other words, everything that'll keep you turning pages.” —Bustle

“Catherine McKenzie’s Smoke is a marvel, a mystery that portrays relationships with subtlety, small-town life with precision, and reveals the world of the fire obsessed—for evil and for good. Smoke smolders with tension, sizzles with intelligence, and you won’t put it down until the air has been cleared and the last page turned.” —Robin Black, author of Life Drawing

“Smoke is an exquisitely composed portrait of people in an extreme situation, navigating the metaphorical fires they’ve created and a literal one they need to contain. I fell in love with these shades-of-gray characters and their authentically portrayed need for change and relief. Commercial fiction at its finest.” —Therese Walsh, author of The Last Will of Moira Leahy and The Moon Sisters

“Catherine McKenzie’s Smoke is as hot as the wildfire that serves as the novel’s backdrop. As one couple tries to sort through their issues, temperatures rise until the air is clouded with mistrust, and blame runs amok through an entire community, leaving her characters no choice but to fight for what—and whom—they love. This is domestic drama at its best!” —Kathryn Craft, author of The Art of Falling and The Far End of Happy

“Smoke is a sizzling page-turner with wonderfully flawed and human characters and a riveting plot portraying both the terror and the attraction of playing with fire. So engrossing and real it will leave the reader smelling smoke on their clothes, this is Catherine McKenzie’s best book yet.” —Kathleen McCleary, author of Leaving Haven

“McKenzie’s mesmerizing page-turner about a raging forest fire that may—or may not—conceal a crime will keep you up way past bedtime. Part mystery, part roller-coaster read about secrets and trust and the complexities of marriage and friendship, Smoke is guaranteed to stimulate lively book club discussion.” —Barbara Claypole White, award-winning author of The In-Between Hour and The Perfect Son

“Smoke is an engaging and readable novel for those who enjoy suspenseful women’s fiction.” —Authorlink

Other titles by Catherine McKenzie

You Can't Catch Me