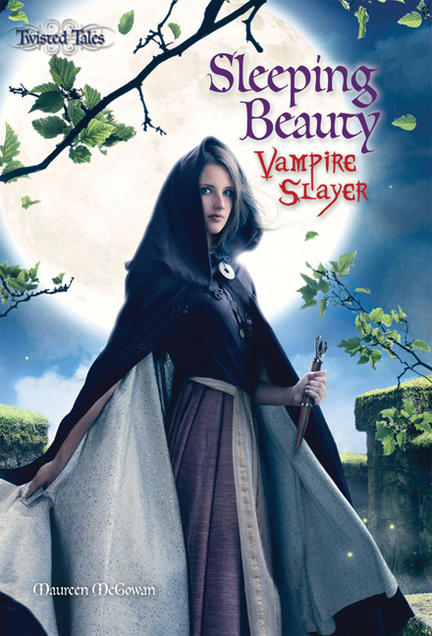 In this thrilling story full of adventure and romance, Sleeping Beauty is more than just a lonely princess waiting for her prince-she's a brave, tenacious girl who never backs down from a challenge. With vampire slaying talents that she practices in secret, Sleeping Beauty puts her courage to the test in the dark of night, fighting evil as she searches for a way to break the spell that has cut her off from her family. In a special twist, readers have the opportunity to make key decisions for Sleeping Beauty and decide where she goes next-but no matter the choice, the result is a story unlike any fairy tale you've ever read!

Maureen McGowan always loved writing fiction, but having been sidetracked by a persistent practical side, it took her a few years to channel her energy into novels. After leaving a career in finance, she hasn’t looked back. Aside from her love of books, she’s passionate about films, fine handcrafted objects, and shoes. Maureen grew up in various Canadian cities. Her previous career moved her to Palo Alto and Philadelphia before she settled in Toronto, where she attends the Toronto International Film Festival each year. Visit her online at: www.maureenmcgowan.com.

Great twist on and old classic!

When I first requested this book for review, I hadn't realized that it was a choose your own adventure type storyline. At first it wasn't working so well on my ereader, because the pages would start overlapping and it didn't like jumping from section to section so well. Once I flipped over to reading on my laptop things went much smoother- so I would say that reading the actual paperback copy because it was all kinds of awesome being able to flip all over following the different paths.

This story has all of the typical Sleeping Beauty elements (which happens to be my favourite fairy tale), but it's even better because it has vampires in it this time around. Lucette's curse isn't just the typical "prick her finger and everyone slumbers", it's everyone sleeping at night while she is stuck awake and vice versa during the day - eternal loneliness... until she finds true love.

Lucette is quite determined to protect the kingdom and her family from the vampires who cursed her. She has always longed to become a vampire slayer and she actually becomes quite good at it - good thing because she needs all the skills she can to outwit vampires while everyone sleeps.

I loved the two supporting characters - who also happen to be love interests. The story keeps you on your toes as to which one might just become her "true love". The characters I was most disappointed with were her parents, who were whiny and just had no guts and Queen Natasha of the vampires, she wasn't nearly as scary as Maleficent was in Disney's Sleeping Beauty. I had really hoped that Natasha would have been creepier and meaner.

I still prefer the Disney version more, but this version was quite enjoyable with plot twists and turns. If you are a fan of Sleeping Beauty AND vampires, then you should check this quick read out - it won't disappoint.

It was everything I was hoping for and more... the fact that it has 8 different ways to it, remarkable! Quite clever too, if you think about it.
I loved Sleeping Beauty in this story so much more than the original fairytale, and let me tell you it had a large bit to live up to being my favorite fairytale. She was so independent and strong, and the fact she could defend herself was a bonus!
I realized after I decided to read it, that it's a second in the series. Yes I have the other book, Cinderella Ninja Warrior, but I didn't think I would be lost. I sure don't feel lost now after reading it either.
Good stuff, for everyone 12+.

Other titles by Maureen McGowan