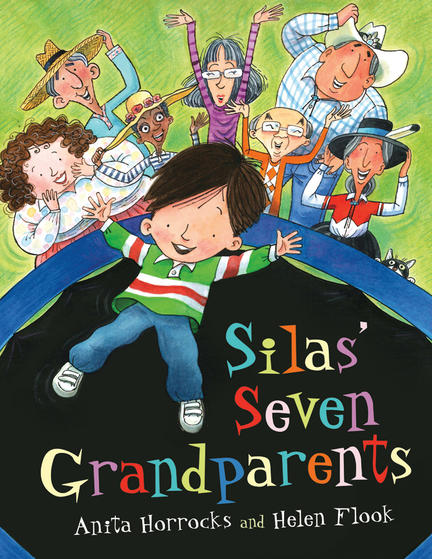 Silas is a small boy who finds a unique solution to keeping up with his seven adoring grandparents. Most of the time, Silas loves having seven grandparents. Each of them has something unique and valuable to offer. They take him to amusement parks, museums, dog shows and camping. When Silas' parents go away on a business trip, all seven grandparents invite Silas to stay with them. However, one Silas can't be with seven different grandparents at once. How can he choose one without hurting the others' feelings? But Silas comes up with an especially good idea that makes everyone feel included and happy.

Anita Horrocks was born in The Pas, Manitoba, and grew up in Winkler, a small Mennonite community on the prairies of southern Manitoba. After high school she moved to Alberta, where she earned diplomas in Ecological Sciences and later, Print Journalism. She worked digging for dinosaur fossils, as a park interpreter and as a freelance writer before becoming public relations co-ordinator for the University of Lethbridge. She lives in Lethbridge with her husband, Bryan.

Helen Flook was born and grew up in the beautiful countryside of Wales. She always loved to draw, but never imagined that one day she would be drawing for a living - what a great job! Art was always her favourite subject at school. She went on to do an Art Foundation Course and then a Degree in Graphic Design at Norwich School of Art and absolutely loved it!
Over the next few years, Helen worked as an excavator and illustrator on a number of archaeological digs in Britain, France and Germany. She also worked for The Royal Society for the Protection of Birds - another great job, satisfying her interest in nature and wildlife.
In 1995, she moved with her husband and son to Canada. They lived in Guelph, Ontario for ten years learning all about hockey, real winters and what it was like to live somewhere completely different. She was published in a number of national newspapers and magazines in Canada, but eventually returned to her greatest love--children's books. She has been fortunate enough to be asked to illustrate books by some tremendous children's authors, both in North America and Britain.
In 2005, Helen and her family returned to Wales and she now lives and works from a beautiful village called Abergwyngregyn. Most of her work is produced using acrylic inks, which have lovely bright strong colours. Though she does occasionally try out watercolours and coloured pencils, pen and ink drawing is her favourite.
Ten Things You didn't know about Helen Flook~
1 - I love Tin Tin and Asterix books and collect old Rupert Bear annuals.
2 - I cannot exist without tea (preferably Ceylon)
3 - I was once a frog in a school play
4 -I have a cat with no name (he was the stray who came in from the cold)
5- I have met Paul Hendersen and seen the Queen
6- I once lived in a haunted manor house with a moat
7 - I have been up in a glider plane once - it made me airsick especially when we looped the loop.
8 - I think my favourite colour is red, though I quite like blue too.
9 - I love Christmas - except the cooking bit
10 - I have walked to the top of Snowdon (the highest mountain in England and Wales) four times

"[A] great picture book, not only because it is a fun story to read, but because it teaches kids about a different set of family dynamics…The end of this book is super cute, and it's guaranteed to touch the hearts of all readers, big and small."

"An unusual grandparent story told with humor—not at all sentimental and introducing the variations on family configurations. Recommended."

"The grandparents themselves are portrayed with joy and great variety, not only in stature and demeanor but ethnicity as well. This is simply a delightful celebration of family."

"Done in acrylic ink, the lively cartoon art is bright and unassuming. The cast of characters is subtly multicultural but their ethnic diversity is presented in a matter-of-fact way. This is a positive story about love and family to share one-on-one with grandparents, no matter how many there are."

"The deftly drawn water-based ink illustrations reflect the story's upbeat tone and portray the widely diverse grandparents in ways that make them distinctive. A refreshing alternative to the many overly sentimental picture books about children and their grandparents."

&quotA good jump off point to discuss the many different forms of family. Silas' final idea is cute.&quot

"Silas's conflict is wholly relatable, and readers will enjoy, vicariously, all the doting, shown in carefree acrylic-ink illustrations."

"Fills a much-needed niche in that it addresses the fact that all families look different. It is also a celebration of these differences. Recommended."

"This cute story will cause students to wonder how one boy can have seven grandparents, but this situation can also be turned into a teachable moment...Anita Horrocks writes of a very loving family situation. Helen Flook's illustrations are bright and colorful, warmly complementing this family story...Recommended."

"An intergenerational story with a lot of heart."

In this picture book, Silas’ seven loving grandparents make him feel “especially loved, times seven”. Each doting and somewhat over-zealous grandparent is different and very much involved in Silas’ life, which for Silas is sometimes over whelming. They take him to museums and planetariums, camping and berry picking. They stay up late to count shooting stars, ride roller coasters with him and cheer him on at his hockey games. Silas must choose a grandparent that he would like to stay with while his parents are away. Silas realizes that all his grand parents bring something unique into his life. Instead of choosing one over the other, he invites all seven grandparents to look after him

Horrocks is the author of Topher and Almost Eden. This is her first picture book.

Usually Silas loves having seven grandparents dote on him, but sometimes it’s all a bit too much. When Silas’s parents go away on a business trip, all of his grandparents want him to stay with them, but that’s just not possible. How will Silas resolve this problem without hurting the feelings of any of his grandparents?

Other titles by Anita Horrocks

What They Don't Know

Breath of a Ghost

Other titles by Helen Flook

Beatrice More and the Perfect Party

Beatrice More and the Perfect Party