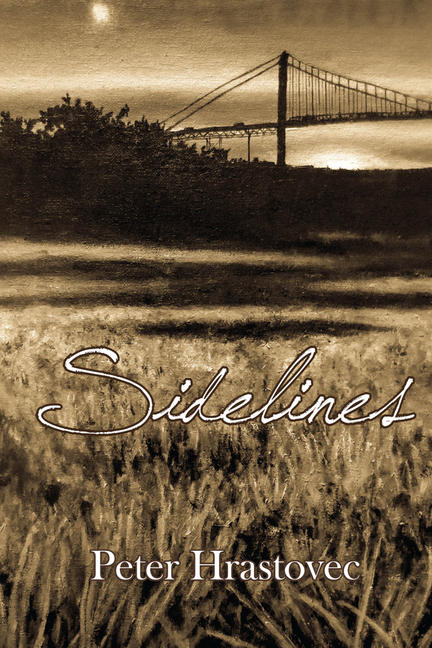 Sidelines is a book of down-to-earth poetry straight from the mind of a busy professional, Peter Hrastovec: lawyer, poet, father, community leader, and occasional stage actor. It includes poems recording time and prominent people both historical and contemporary who have had a significant impact on Canadian culture, such as Margaret Atwood, Mordecai Richler, and Irving Layton. This work is reflective and personal, but still approachable to the casual reader. Poetry fans, anyone interested in reading the words of a self-proclaimed food enthusiast, and a lawyer outside the office will all enjoy this book.

Inside the mind of a practicing lawyer is a busy place. Hrastovec allows a glimpse into some of the bustling thoughts running through his mind; these can range from rants on a typical day in the office to tributes to past writers who have had a major influence on the literary world.

Hrastovec uses relatable language that isn?t to be feared; he speaks to be understood. The references aren?t obscure, and are as easy to understand as typing their names into Google. There is a variety of language that will appeal to the poet in all of you.

Sidelines gives readers a glimpse into busy Windsor-Essex life, current and past, and takes them further on a journey beyond home. From the perspective of professional life, he writes about both rural and urban living, as well as travel beyond Canada and the West. Hrastovec's poetic eye captures the passing of time along with all it entails: changing places and beliefs, new life, the loss of innocence, death and the loss of friends, and significant historical events both globally and locally. Throughout his book are accounts of shared histories that many Canadians will recognize as their own.

Peter Hrastovec grew up in Windsor, Ontario where he continues to reside with his family. He is a lawyer as well as a poet, and has had work appear in The Windsor ReView's Special FILTH issue (Spring 2012). In Lieu of Flowers (2012) was Peter Hrastovec's first book of poetry, and appears in the Black Moss Press First Lines Series.

the old grey clock numbed into stubborn silence wears an embarrassed grin and stares blindly out to sea the small gothic steeple --the triumph of some deceased generation? points an indignant finger at the innocent morning breaking in blue

rumor has it he's resting

Other titles by Peter Hrastovec

There Will Be Fish

In Lieu of Flowers