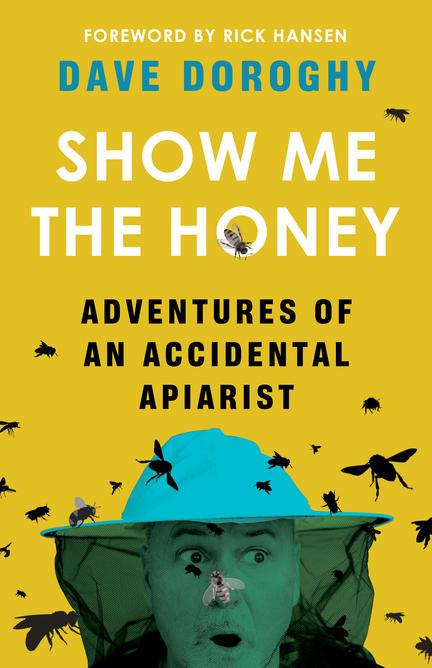 Winner of a 2020 Gourmand World Cookbook Award
"If you think beekeeping is a quick and easy shortcut to wealth, this book will set you straight. . ." —New York Times

A lighthearted, self-deprecating account of one fledgling beekeeper’s misadventures. With wit and warning in equal measure, this informative, refreshingly honest narrative will resonate with any new beekeeper.

When Dave Doroghy’s sister gave him 15,000 honey bees as a Christmas gift, his practical knowledge of beekeeping would have fit on the proverbial backend of an Apis mellifera. He spent the next two years learning everything he needed to know to keep that beehive alive and well—he attended a beekeeping conference, joined a bee club, and even went to bee school. But bad things still happened—he sustained multiple stings, wasps attacked his hive, he fought an ongoing battle with killer varroa mites, and even lost his queen—twice!

In Show Me the Honey Doroghy recounts his often tension-filled misadventures in beekeeping with self-deprecating humour and lightheartedness. Whether it’s the impending chaos of transferring tens of thousands of insects to an outyard, the horror of discovering bees on the inside of his beekeeping suit, or just wondering if he will end up with even an ounce of honey for all his efforts, Doroghy shares the joy, the surprises, and the less-acknowledged financial sting of keeping bees. Above all, he relishes in the details of keeping a hive and getting to know the fascinating little creatures that inhabit those mysterious wooden boxes.

Dave Doroghy has worked in radio broadcasting and advertising, and has spent the last 30 years in sports marketing. He was the Vice President of the former NBA Vancouver Grizzlies and more recently the Director of Sponsorship Sales for the Vancouver 2010 Olympic Winter Games. Dave now lives on a floating home just outside of the city, where he raises bees and blogs about it at houseboathoney.com. He is the co-author of 111 Places in Vancouver You Must Not Miss.

Jim Taylor, author or co-author of fourteen books and a veteran sports columnist with the Vancouver Province, writes with first-hand knowledge of the problems of the disabled: his daughter became a quadriplegic with diffuse brain damage as the result of a skiing accident in 1976 at the age of fourteen. Jim Taylor lives in Vancouver with his wife, Deborah.

Other titles by Rick Hansen

30 Years Later—A Celebration of Courage, Strength, and the Power of Community