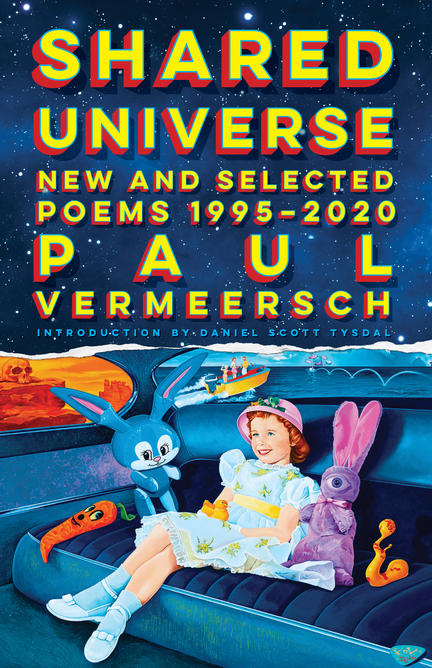 Paul Vermeersch has reinvented the “new and selected.” Bringing together the very best of his poetry from the last quarter century with new and never-before-published works, Shared Universe is a sprawling chronicle of the dawn of civilizations, the riddles of 21st-century existence, and any number of glorious, or menacing, futures. Selected poetry collections are traditionally organized according to the books in which the poems first appeared, but these poems are arranged by prophecy and mythos, corresponding to the human (or trans-human) body, or as dictated by animal speech. In this universe, time is thematic instead of chronological, and space is aesthetic rather than voluminous. Here, alongside popular favourites, are recently unearthed gems and visionary new poems that reveal the books hidden within the books of one of Canada’s most distinctive and imaginative poets.

Paul Vermeersch is the author of three collections of poetry: The Fat Kid, Burn (a finalist for the Gerald Lampert Award) and, most recently, Between the Walls. He is also the editor of the anthology The I.V. Lounge Reader. His next collection, The Reinvention of the Human Hand, is forthcoming in 2010. His poetry has been published widely in literary journals and magazines. He lives in Toronto, where he works as a teacher and serves as poetry editor for Insomniac Press. He is a long-time reader and admirer of the work of Al Purdy.

Daniel Scott Tysdal is the author of two previous books of poetry, The Mourner's Book of Albums and Predicting the Next Big Advertising Breakthrough Using a Potentially Dangerous Method, winner of the ReLit Award for Poetry, the Anne Szumigalski Poetry Award, and the John V. Hicks Award. Tysdal's poems have also appeared in numerous literary journals and anthologies. His book The Writing Moment: A Practical Guide to Creating Poems was recently published by Oxford University Press. He teaches English at the University of Toronto Scarborough.

You and the ice cream truck and the King

Cobra all exist in the same universe

as the two-legged tortoise, the Star Queen Nebula,

and me. Eventually, there must be a story

that involves all six of us: you will be driving

the ice cream truck among the farthest stars

in search of His Majesty King Cobra, despite

his famous venom, despite his propensity

to strike, and I will follow behind you riding

the wounded tortoise, the front wheels

of a plastic Batmobile glued to her shell

as prostheses. These are the forms we will take

when we encounter the Star Queen in her home,

the pillars of creation billowing from her head.

And there is King Cobra, coiling his long body

around the pillars, emanating from her third eye

as Uraeus from the forehead of a pharaoh.

“You have come here,” he says, “to learn

what you already know: that you exist

in the same universe as ice cream, Batmobiles,

and the act of mutilation.” New stars are fusing

within the pillars, and within the stars, new-born

“Use these to make an apple,” the serpent says.

a blind donkey arrives behind us, and a silvery

porpoise, and an immense hypothetical mountain,

and we all nod knowingly, knowing what we know.

“Vermeersch’s poetry is tremendously rich … The poems, always perceptive, sometimes achingly sad, and sometimes achingly funny — are real poems. That is, they are written with an ear for the sound of our language: for the basic iambic of English, for the drama of emotion and wit, for the richly suggestive possibilities of pun and colloquial usage.” — The Fiddlehead

Other titles by Paul Vermeersch

The Reinvention of the Human Hand

Other titles by Daniel Scott Tysdal

The End Is in the Middle

End Is in the Middle

A Practical Guide to Creating Poems