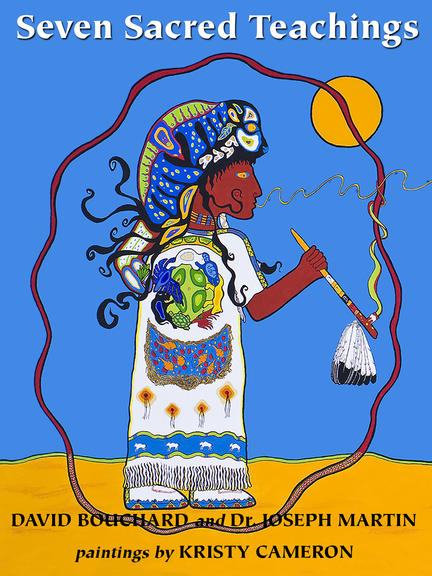 The Seven Sacred Teachings is a message of traditional values and hope for the future. The Teachings are universal to most First Nation peoples. They are a link that ties First Nation, Inuit and Métis communities together.

David Bouchard is Canada’s most renowned and awarded Métis author. Dr. Joseph Martin has spent his life coming to understand the Sacred Teachings. Métis Kristy Cameron took a year out of her life to interpret the Teachings through her art. Swampfox has created seven flutes out of seven different woods, each in the key that is consistent with a particular Teaching. This master flute maker then dreamed seven songs to accompany this telling.

Rooted in humility and honesty, the creators have tried to respect the cultures and traditions of all peoples. It is our hope that this telling will unite and thus heal divisions. Prophecies tell that this is the time for One Heart, One Mind and One Drum. We, readers and authors alike, are the ones we have been waiting for. There is nobody else who can revitalize our culture and values except ourselves.

It is our hope that this telling might move readers toward greater courage and wisdom and ultimately toward achieving and understanding what is true in life’s journey.

Dr. Joseph Martin is the former dean of the prestigious Harvard Medical School. He is widely regarded as a key figure in the groundbreaking research that paved the way for the latest developments in the treatment of such neurodegenerative disorders as Alzheimer's and Huntington's disease. On his way to the dean's office at Harvard, he held similar positions at the University of California, San Francisco, and at McGill University. In fact, his career began in Canada, where he was also born, on a small dairy farm in Alberta. In 2006, Dr. Martin was the first winner of the Henry G. Friesen Prize in Health Research.

Kristy Cameron is a teacher and Métis artist from Canada’s Canoeing Capital, Atikokan, Ontario. The Surrounding forests and waterways have always given her inspiration, while her Aboriginal and Voyageur ancestors have provided endless stories to tell on canvas. (Look for the sash in all her work.) Learn more or purchase her art at: www.kristycameron.ca

Other titles by Kristy Cameron