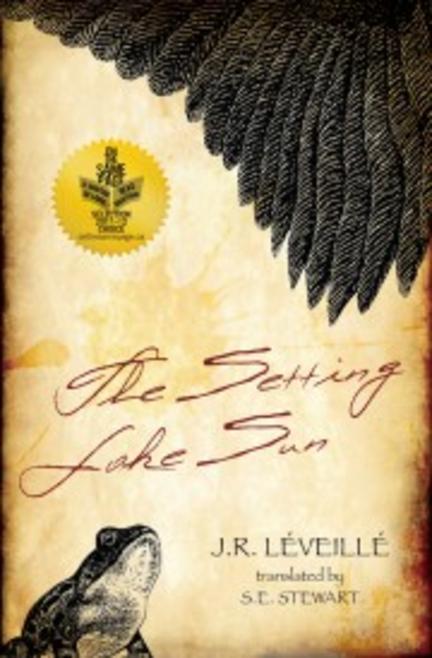 The Setting Lake Sun, J.R. Léveillé's first novel set in his native Manitoba, describes the unforgettable encounter of Angèle, an aspiring young Métis architect, with Ueno Takami, an older Japanese poet. The story begins when they meet at an art gallery in Winnipeg, a city surprisingly rich both physically, in its architecture, and culturally, with its mix of heritage and customs brought by people who have emigrated there from all over the world. From Winnipeg Angèle and Ueno head north through the wilds to Thompson. Narrated by Angèle, who is remembering her feelings of excitement, surprise and wonder at the discoveries inspired by the Japanese artist, The Setting Lake Sun is as much a love story as a spiritual journey, a celebration of life in all its incompleteness, imperfection, and impermanence.

Born in Winnipeg, J.R. Léveillé is the author of over thirty books of poetry, fiction and essays published in Canada and abroad. He is the most widely reviewed contemporary Western Canadian Francophone author. An international symposium on his work was held in 2005. Leveille has won numerous literary awards, including the Manitoba Lifetime Writing and Publishing Award. Le soleil du lac qui se couche/The Setting Lake Sun has amassed numerous accolades, including winner of the Prix Champlain, winner of Le Prix Litteraire Rue-Deschambault, Very Honourable Mention--John Glassco Translation Award, and shortlisted for the Carol Shields Winnipeg Book Award. It was chosen by readers as the winner in Manitoba's On the Same Page competition in 2011.

S.E. Stewart has translated poetry, plays, film scripts and fiction, as well as various non-fiction texts on literary, performing, visual and media arts. She holds an MFA in Creative Writing from the University of British Columbia and studied translation at the Université Laval.

As I entered Frank’s office I saw Ueno and Sara huddled over the proofs of illustrations and text. They raised their eyes when they felt us come in and simultaneously turned their heads to us.

“What a wonderful surprise,” said Ueno. “Frank told me there would be a visitor today, but I never imagined… You look good with your hair in a ponytail. And I like your shoes.”

Ueno had on a reddish-brown T-shirt, a jacket of faded khaki linen, jeans and his work boots.

He shook my hand in a way that left me breathless.

I said hello, timidly, but with a pleasure that must have been plain for all to see. I kissed Sara and Frank prepared a cappuccino for me.

“How are you?” Ueno asked. Turning back to the work table, he continued, “We’ll just finish up this one little thing and then we’ll take a break.”

“Not at all,” is what I expected to hear—a mere politeness—but instead he said, “On the contrary.”

I don’t know why, but I blurted out a platitude, something like, “Are those your poems?”

“Yes. And you’re going to translate them.”

Frank looked at me in wonder and made a small Italian gesture that I suppose means, Hey, hey!

As for me, I was dumbfounded, with no idea what to say. I heard the voices of Ueno and Sara run on like a distant hum. I could see a welter of sheets the colour of India paper, and letters swarming like black fireflies.

I would be exaggerating if I said I thought I would faint. But I suddenly found myself engulfed in a kind of darkness, with a small lantern shining out before me.

Then it passed. They did actually take a break. Ueno went out on the street to buy hot dogs from a vendor’s wagon. We ate them in the office. Frank brought us one of his jugs of wine.

I was looking at the two or three poems of which proofs had been printed. The lettering was at once simple and stylized, that was clear. But it produced a somewhat primitive look, of something handmade. Frank explained that they had used old-fashioned lead type of a kind that was no longer manufactured. As a result, there were slight variations from letter to letter in the opening and the body. Ueno told him, “There is beauty in imperfection.”

Then he leaned over to me and gently repeated, “You’re going to translate them.” He said it with the same certainty as the first time I met him when he said, “You’re Métis, aren’t you?” Not an exclamation, nor really a question. With the confidence of one who knows. A sort of innate knowledge.

“What makes you say that?”

“It’s because of your dual nature.”

“You can speak French. You should do it yourself.”

“You know—” When he addressed me, he would go freely from “vous” to “tu” and back again, formal to informal, sometimes in the same sentence. I don’t know if he was doing it consciously or whether, as he said, “—my mastery of the language is not that good.”

“Neither is mine. I don’t have any particular skills and…”

“No, no. I have a feeling you can do it. You are interested in the arts, in literature, in architecture, and translation is a form of construction.”

I turned to the proofs. “I like this one very much.”

“Ah, the poem about the geese and the frogs. Why?”

“At the same time it’s joyful.”

“That’s natural. You see, you already have a great sensitivity for the work.”

“Of course! On the other hand, there’s nothing wrong with failure. The translation will be for you alone. And it will give me great pleasure,” he whispered with the gentlest smile in the world. Then he added, “The geese, that’s me. The frogs, that’s you.”

"This quiet, elegantly suspended story generates an aura that is softly enfolding, stirring respect for elusive connections and a gentle engagement with mysteries." The Globe and Mail "The book's low-key narrative style, despite the book's major events, lends the whole book a still centre, a tumultuous quietness much like Ueno's presence in the narrator's life. In the end, it's a story as brief as a kiss can sometimes be." Uptown

Other titles by J.R. Léveillé

Other titles by S.E. Stewart

Summer Holiday #ReadLocal Special: Read Where You Are

Find great reads connected to the places you're headed to this summer with our #ReadLocal map.