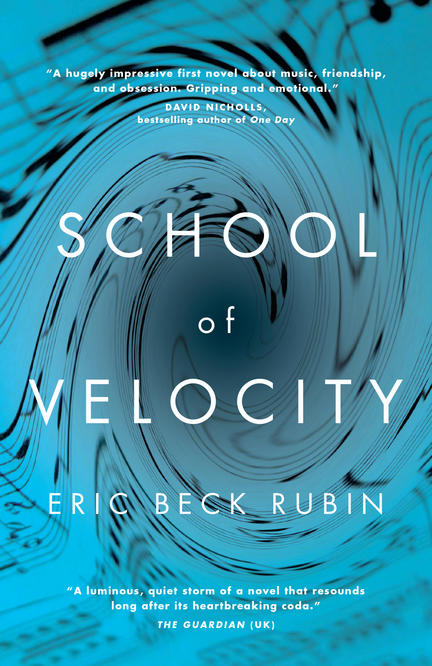 A wrenching and deceptively spare debut novel about an electric friendship between two boys that slowly reveals itself as a deep and lifelong love.

Jan DeVries' career as virtuoso pianist is thwarted by the crippling auditory hallucinations that have plundered his performances and his mind. As the disorder reaches its devastating peak, the walls Jan has built around himself crumble, rendering him unable to repress the overwhelming flood of memories and the troves of unspoken words that linger between him and his childhood best friend, Dirk Noosen, with whom he lost touch long ago. He is faced with only one recourse: to head home and confront him. With a singular voice and a masterful balance of emotional resonance and restraint, Eric Beck Rubin tells the tender story of Jan's obsessive friendship with the charismatic, irreverent raconteur Dirk as the reader breathlessly awaits their reunion.
This luminous novel is about music, repression and regret; about adolescence, sex and friendship, and, ultimately, about the kind of love that lasts a lifetime.

ERIC BECK RUBIN is a cultural historian who writes on architecture, literature and psychology, and this novel is his first foray into fiction. He is currently at work on a second: a family saga spanning several generations, from pre-World War II Germany to present-day Los Angeles and Western Canada. He lives in Toronto.

"Elegant and lyrical prose that both hides and reveals the unquiet mind of its protagonist, a highly thoughtful and emotionally devastating first novel" —Jury of the 2017 Vine Awards for Canadian Jewish Literature

"This debut shows [Eric Beck Rubin is] a talent to watch." —The Globe and Mail
"Rubin writes with grace and exactitude, giving a tangible, animated quality to the sensual world of his story. . . . Both tender and truthful in its evoking of the canyon that lies between the openness of youth and the dangerous restraint of middle age, this is a luminous, quiet storm of a novel that resounds long after its heartbreaking coda." —Diana Evans, The Guardian (UK)

"A hugely impressive first novel about music, friendship and obsession. Gripping and emotional." —David Nicholls, bestselling author of One Day
"Named after a series of repetitive exercises for practising scales, the narrative is as precise and methodical as its title. School of Velocity is a taut novel that builds tension to thriller level." —The Guardian (UK)
"Debut novel School of Velocity is classical music's Brokeback Mountain. . . . Engrossing. . . . School of Velocity raises questions about repression, sexuality and the artistic process, and is a compelling story." —CBC Music

"Rubin seems to channel young T. S. Eliot's style and sensibility, with a fatalistic concern for the unachieved and the myriad ways in which life's minor tragedies color the whole of experience. . . . Rubin is remarkably accomplished for a first-time novelist." —Los Angeles Review of Books

"Cultural historian Eric Beck Rubin's debut novel is an elegant synaesthetic tale in which memories of past loves and lost innocence are narrated alongside soundscapes of de Vries's musical repertoire. . . . De Vries's final confrontation with Dirk is a tragic, Gatsby-like meditation on the impossibility of reliving the past, however much we cling to our memories." —Financial Times (UK)
"As Jan watches Dirk hog the limelight, longing to have him alone, there are overtones of Patricia Highsmith's The Talented Mr Ripley. Like the flamboyant Dickie Greenleaf, Dirk is a vibrant presence, always teetering on the edge. . . . Rubin has succeeded in his short novel, as Jan himself puts it, 'to conceive of a piece as a story, and of composers as storytellers with specific voices, cadences, personalities.'" —Irish Times

"A fascinating dissection of the power of friendship." —Irish Examiner