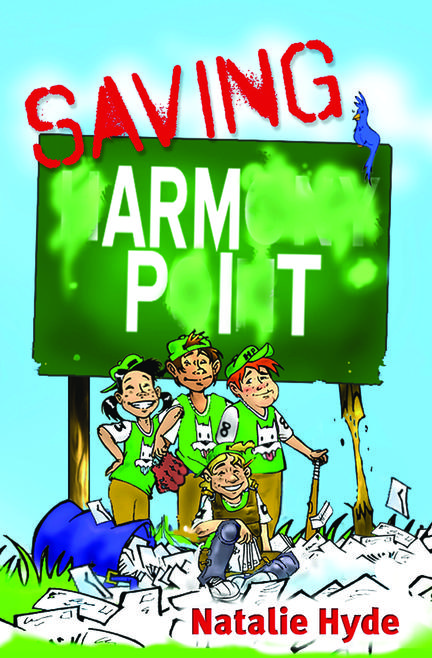 When vandals deface the Harmony Point sign, the town does indeed seem to become the "arm pit" of the region. The baseball team hasn't won a game in two seasons and the town itself is falling into disrepair. But when the new postmaster becomes the ball coach, Clay and the rest of the Terriers finally seem to stand a chance of winning a game. Until they overhear a bureaucrat from the city say that the post office will close unless the "numbers" work out. The team begins "Operation Tennis Elbow" - a letter writing campaign designed to generate enough mail to keep the post office - and its postmaster - in town (and coaching their baseball team). And along the way, they learn the power of the pen in effecting positive changes in their community.

Natalie Hyde writes fiction and non-fiction for middle-grade and young adult readers. Her fiction titles include Mine!, Saving Armpit, I Owe You One and Hockey Girl. She is also the author of over forty educational non-fiction books, as well as trade non-fiction titles: Cryptic Canada, Glow-in-the-Dark Creatures and Stay Strong: A Musician’s Journey from Congo to Canada. Her books have garnered award nominations in both Canada and the U.S. She lives in Flamborough, Ontario, with her family.

"Saving Armpit is a heartwarming story, with funny extra textual components in between the chapters in the form of mail or email correspondence that the kids solicit (fudge recipes, summer camp advertisements, heritage organizations, emails). There's also plenty of action and sports lingo on the baseball diamond to draw in a young readership who loves or could be interested in baseball (with a glossary of sports terms at the back, which helped me immensely)."
— CM Magazine

"This book would be a terrific read-aloud for students to learn about citizenship, community service, and collaboration. Sportsmanship and hard work, respect for coaches are also valuable lessons within the story."
— School Library Journal starred review

"Saving Arm Pit is a delightful middle grade chapter book about dramatic adventure in baseball teams written especially to appeal to readers age 9 and up. Complete with a special glossary of baseball terms, information about baseball rules at web sites, and interest-piquing forms, letters, publicity advances, and journalism ephemera, Saving Arm Pit is an irresistible automatic page turner for kids. It's also just a lot of fun."
— Midwest Book Review

Clay and the rest of the Harmony Point Terriers baseball team are used to losing. Their coaches have never known anything about baseball, they have mismatched hand-me-down uniforms, they lose every game. Their situation seems appropriate for their small town, which has also lost its fire and police departments and even the local government — all now amalgamated into the city of Holmesville. No one has even bothered to fix the town sign where April Fool’s pranksters painted out most of the letters so that HARMONY POINT became ARM PIT.

It seems miraculous to the Terriers when the new postmaster turns out to be a knowledgeable baseball coach with a bag of real equipment. However, as the Terriers slowly improve, it looks as if Coach Blackmore’s post office may be lost to the city, too. Clay and his friends devise a plan to keep the post office busy and open — writing to summer camps for brochures, to magazines for fudge recipes and to any government department they can think of to report potholes, sightings of rare birds, unsafe playground equipment and more. But it looks as though their efforts may be in vain.

Author of several non-fiction books, Natalie Hyde presents a fun and engaging read for baseball and non-baseball fans alike (with a convenient glossary at the back of the book for those who need to brush up). The thoughtful and observant Clay, base-stealing Sophie, statistics-crazy Scott and the rest of the Harmony Point community are drawn with humour. Hyde writes with real affection for small town life and cleverly punctuates the chapters with newspaper clippings, emails among Canada Post employees and responses to the Terriers’ letter-writing campaign.

Things couldn’t be worse for Harmony Point — their sign has been vandalized, their baseball team hasn’t won a game in two seasons, and the town is falling into disrepair. But to make matters worse, the Terriers are about to lose their coach with the closing of the post office. How will Clay and his teammates save the day?

Other titles by Natalie Hyde

Ruth Mornay and the Unwanted Clues

The Effects of Climate Change on the Oceans

Why Are Oceans Important?