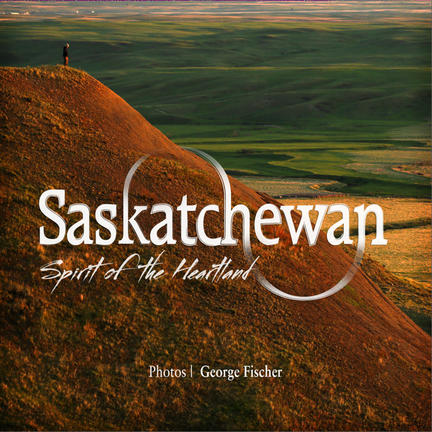 Spirit of the Heartland takes a new approach to telling a historic story—pairing George Fischer’s photographic art with that of seven prominent Saskatchewan painters and sculptors.

According to sculptor Joe Fafard, George Fischer reveals the true nature of a province that is often underestimated and misunderstood—and the experience is transformative. “He recognizes that Saskatchewan is defined by extremes, and pays homage to the history, culture and nature that have shaped us,” he says. “To tell our story, he bravely journeys into precarious places to uncover what’s behind the faces, the farms, the fields.”

Throughout the book, Fischer’s curiosity takes him into the heart of Canada’s Wild West. He follows in the footsteps of warriors and cowboys, explorers and traders, miners and oil barons who carved the routes to modern Saskatchewan. In richly coloured images, he captures the people’s spirited relationship with Nature through farmlands, horses and wheat; dunes, forests and waterways.

George’s artistic eye brings to light what prairie people have always known: that Saskatchewan holds a quiet, yet stunning, allure equal to the most exotic places on Earth. And he digs deep to introduce readers to Mounties and royals and legends. Time well spent.

George Fischer is one of Canada's most renowned and prolific landscape photographers. His unique style has been recognized around the world. He has provided photography and editorial content for promotional literature published by tourist boards and international tour operators. George's work has appeared on the covers of magazines and newspapers worldwide as well as websites and ad campaigns for hundreds of companies. And he has produced more than 65 photographic books. In November 2017, George received the Ontario Tourism Award of Excellence in Photography. Among his major accomplishments is the book, Canada: 150 Panoramas, which was on the best-seller list at Chapters/Indigo and quickly sold out of its first printing. In 2007, Unforgettable Canada was on The Globe and Mail's bestseller list and has sold over 75,000 copies. It is now in its third printing. George is also recognized for his worldwide collection of more than 50 art posters and unique art prints created for various companies, hospitals and private collectors. An avid outdoor adventurer, George has hiked Machu Picchu in Peru and in Bolivia cycled what is dubbed "the world's most dangerous road." He has summited Mount Kilimanjaro in Tanzania, Gokyo Ri in the Himalayas and Torres del Paine in Chile. In Iceland, he hiked to raise funds for the Arthritis Society of Canada. And this Toronto Canada resident has now set his sights on canoeing the Nahanni River in the Northwest Territories.

Other titles by George Fischer