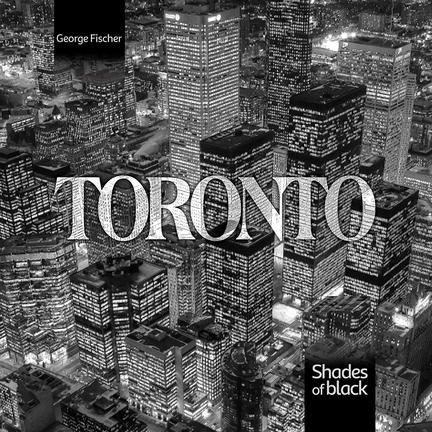 For many years, George Fischer has called Toronto home. During that time, he has used colour photography to record the culture, history and glamour of this amazing metropolis.

In a departure from his colourful reporting, this monochromatic take on Toronto uses the luminant black-and-white medium to craft highly personal interpretations of the city's personality. Fascinating photographic statements draw attention to hidden elements throbbing beneath countless concrete, glass and wood surfaces. Intriguing interplays of white, black and gray impart an edgy aesthetic that accentuates Toronto's timelessness, intricacy and romance. Through his lens, you'll peer into the mysteries behind inky silhouettes, watery depths and textured skies.

Deep in the heart of Fischer's Toronto, wood nestles in stone, brick dances with glass, rubber smudges on asphalt. Shadows and light blur the lines between night and day, blend the shifting seasons and recast the life of the city. And give you a chance to see the city in a new light.

George Fischer is one of Canada's most renowned and prolific landscape photographers. His unique style has been recognized around the world. He has provided photography and editorial content for promotional literature published by tourist boards and international tour operators. George's work has appeared on the covers of magazines and newspapers worldwide as well as websites and ad campaigns for hundreds of companies. And he has produced more than 65 photographic books. In November 2017, George received the Ontario Tourism Award of Excellence in Photography. Among his major accomplishments is the book, Canada: 150 Panoramas, which was on the best-seller list at Chapters/Indigo and quickly sold out of its first printing. In 2007, Unforgettable Canada was on The Globe and Mail's bestseller list and has sold over 75,000 copies. It is now in its third printing. George is also recognized for his worldwide collection of more than 50 art posters and unique art prints created for various companies, hospitals and private collectors. An avid outdoor adventurer, George has hiked Machu Picchu in Peru and in Bolivia cycled what is dubbed "the world's most dangerous road." He has summited Mount Kilimanjaro in Tanzania, Gokyo Ri in the Himalayas and Torres del Paine in Chile. In Iceland, he hiked to raise funds for the Arthritis Society of Canada. And this Toronto Canada resident has now set his sights on canoeing the Nahanni River in the Northwest Territories.

Other titles by George Fischer

Images to Nurture the Soul