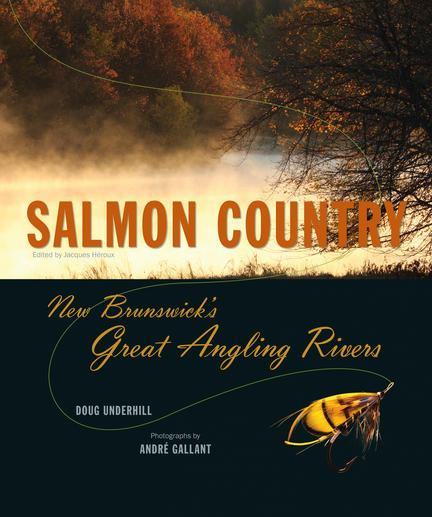 In a stunning combination of superb colour images and lively personal essays, Salmon Country takes us on an excursion along New Brunswick's famous salmon rivers. Marrying the essays of Doug Underhill and the photographs of André Gallant, Salmon Country explores the people, the rivers, the traditions, history, and mythology of this sport of sports. And there's drama around every bend in the river.

Underhill tells of becoming one with the river, of treading deep pools, of wading shallow rapids and gravely shoals in search of the king of fish. Gallant shows the splashy thrill of the catch, breathtaking tree-canopied rivers, and the people who make the experience memorable. Written with keen observation, wit, and verve, Salmon Country brings to life a world centred on fly-fishing, paying tribute to all who share the joy of fishing the Miramichi, Restigouche, Nepisguit, Cains, and Saint John rivers.

A retired English Department-head and a sports/outdoors journalist, Doug Underhill writes a weekly online fishing column. He's been inducted into the Atlantic Salmon Hall of Fame and Miramichi Sports Wall of Fame. He appeared on a stage/radio performance of CBC's Arthur Black and in a documentary film Great Canadian Rivers. He lives writes in Miramichi, New Brunswick. His book Salmon Country was short-listed for the Best Atlantic Published Book Award in 2012.

ANDRE GALLANT specializes in travel photography. He is the author of Dreamscapes: Exploring Photo Montages and was the photographer for the illustrated books Winter, The Great Lakes and Seacoasts, all written by Pierre Berton. In 1996 he joined Freeman Patterson as a teaching partner in his visual design workshops at Shamper's Bluff. His work has been published in Photo Life, Canadian Living, Canadian Geographic, Elm Street, Gardening Life and enRoute. He has received three National Magazine awards.

"Stunningly beautiful . . . André Gallant's photos rival any that have been previously published . . . Salmon Country is a book that every fly fisher will want in his or her library." — Martin Silverstone, Atlantic Salmon Journal

"Stunningly beautiful . . . André Gallant's photos rival any that have been previously published . . . Salmon Country is a book that every fly fisher will want in his or her library." — Martin Silverstone, Atlantic Salmon Journal

Other titles by Doug Underhill

Other titles by Jacques Héroux

Other titles by André Gallant

Photography for the Joy of It

An Introductory Workshop for Film and Digital Photography

At Home and Around the World

Photo Impressionism and the Subjective Image

An Imagination Workshop for Photographers