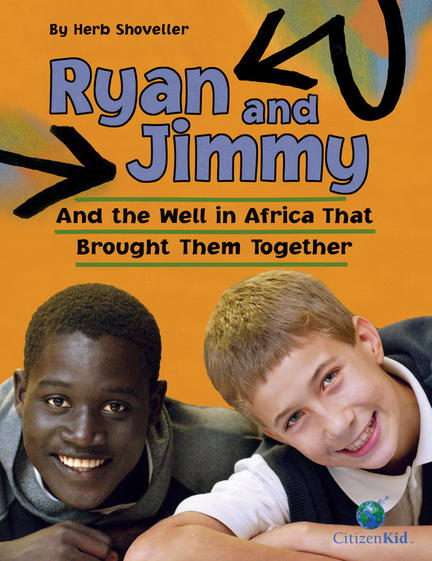 It costs a lot of money to build a well in Africa --- a lot more than Ryan Hreljac had thought. Still, the six year old kept doing chores around his parents' house, even after he learned it could take him years to earn enough money. Then a friend of the family wrote an article in the local newspaper about Ryan's wish to build a well to supply people with safe, clean water. Before long, ripples of goodwill began spreading. People started sending money to help pay for Ryan's well. Ryan was interviewed on television. His dream of a well became an international news story.

In Agweo, Uganda, villagers were used to walking a long way every day in search of water. What they found was often brown and smelly and made a lot of people sick. But when Ryan's well was built, life in the village changed for the better. A young orphan named Akana Jimmy longed for a chance to thank Ryan in person for this gift of life --- clean water.

When they finally meet, an unbreakable bond unites these boys from very different backgrounds, and a long and sometimes life-threatening journey begins.

Ryan and Jimmy is part of CitizenKid: A collection of books that inform children about the world and inspire them to be better global citizens.

Herb Shoveller worked at the London Free Press for two decades before leaving in 2005 to start a writing, editing, and consulting business. He is the author of The Story of Ryan and Jimmy and lives in Guelph, Ontario.

Ryan and Jimmy is a true story of friendship and compassion in which a simple wish to help others brings focus to the necessities that unite us all.—OprahSelects.com

Reminds us that many young people today can and will do wonderful things for their communities ...—Quill & Quire, Starred Review

A great choice for book talking or small-group sharing and discussion, with many possible connections, from social and economic to geographic and political.—School Library Journal

A truly inspirational story, this book can effectively teach about problems and solutions.—LMC Library Media Connection

Now we move from the broad to the specific, with this inspiring story of two young boys, Ryan Hreljac and Akana Jimmy. Ryan is young boy from a middle-class family near Ottawa and Jimmy is a poor boy from a small village in Uganda. The story of how they meet and ultimately become brothers is the basis for this book written by Ryan’s great-uncle, a journalist and writer. When, at the tender age of six, Ryan learned that many people in the world do not have adequate and safe drinking water, he vowed to help fix the problem. It cost $70 to build a well in an African village, his teacher said, and he thought he could raise that money. After four months of household chores, Ryan had earned the money and he and his mother went to WaterCan, an organization that provides safe water overseas. Unfortunately, Ryan learned that his money would only buy the hand pump for the well. The well would cost $2,000.

Ryan was discouraged but the news did not slow him down. His story made the local paper and donations started to come in. He started to make contacts with various people and organizations that would help in his cause. He began to talk to people publicly about the need for safe drinking water. By the end of the year, he had raised enough money to build his well. Ryan’s first well was built in a small village and Ryan became pen pals with one of the boys in the local school, Jimmy. The project gained momentum and Ryan continued to raise money for more wells and a drill to dig them.

Meanwhile, through pictures and text, we see what life was like for Jimmy and his family and how their new well changed the lives of the villagers. When he was nine, Ryan went to Uganda and was given a hero’s welcome. Two years later, Jimmy’s life was in danger when rebel forces kidnapped him. The story of his escape makes for harrowing reading, but the happy ending comes when Ryan’s big and loving family formally adopts Jimmy after he spends a summer visiting them in Ontario.

Today, Ryan and Jimmy travel around the country talking to kids and adults about the need for safe water around the world. Ryan has appeared on Oprah Winfrey’s show. I had the pleasure of meeting them and they are an inspiring pair, these two young men with a simple message. This is a powerful book that brings their story to life, while bringing a tear to the eye, and if you haven’t already done so, run out and buy it! Read it yourself, give it to a young person in your life and make a donation to the Ryan’s Well Foundation (www.ryanswell.ca).

Ryan and Jimmy: And the Well in Africa That Brought Them Together

The true story of a six-year-old who built a well halfway around the world and his life-changing friendship with a Ugandan boy.

Other titles by Herb Shoveller

Go to School, You're a Little Black Boy