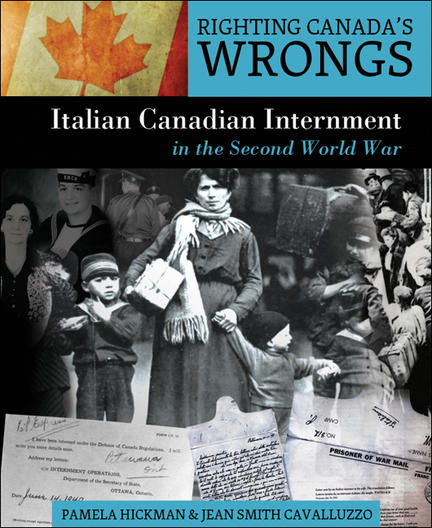 Italians came to Canada to seek a better life. From the 1870s to the 1920s they arrived in large numbers and found work mainly in mining, railway building, forestry, construction, and farming. As time passed, many used their skills to set up successful small businesses, often in Little Italy districts in cities like Montreal, Toronto, Hamilton, and Winnipeg. Many struggled with the language and culture in Canada, but their children became part of the Canadian mix.

When Canada declared war on Italy on June 10, 1940, the government used the War Measures Act to label all Italian citizens over the age of eighteen as enemy aliens. Those who had received Canadian citizenship after 1922 were also deemed enemy aliens. Immediately, the RCMP began making arrests. Men, young and old, and a few women were taken from their homes, offices, or social clubs without warning. In all, about 700 were imprisoned in internment camps, mainly in Ontario and New Brunswick.

The impact of this internment was felt immediately by families who lost husbands and fathers, but the effects would live on for decades. Eventually, pressure from the Italian Canadian community led Prime Minister Brian Mulroney to issue an apology for the internment and to admit that it was wrong.

PAMELA HICKMAN is the author of over forty non-fiction books for children, including winners of the Green Prize for Sustainable Literature, the Best Book Award from the Society of School Librarians International and the Canadian Authors Association Lilla Sterling Memorial Award. She co-authored the first book in this series, Righting Canada's Wrongs: Japanese Canadian Internment in the Second World War. She lives in Canning, Nova Scotia.

JEAN SMITH CAVALLUZZO is a Toronto writer interested in social justice issues. She has degrees in sociology and social work as well as a diploma in journalism. Her articles have appeared in Chatelaine, the Toronto Star, Eye-talian Magazine, and the Globe and Mail. She has also written for CBC radio. She lives in Toronto, Ontario.

"This book is very well-done... The visuals are spectacular and will surely be a drawing card for students at the upper elementary and junior high levels" Rated E, excellent, enduring, everyone should see it!

"Even if a community can "move on", a story like this should never be forgotten. Italian Canadian Internment during the Second World War does an excellent job of telling the story of an ethnic community subjected to grossly unfair treatment and systemic discrimination, both by fellow Canadians and, most regrettably, the Canadian government. The book features a wealth of well-captioned visual material: colour and black and white photos, facsimiles of personal and government documents, and most powerfully, first-person accounts from the many who suffered as a result of the War Measures Act." Highly Recommended.

Other titles by Pamela Hickman

Tree Is a Home, A

Nature All Around: Birds

Nature All Around: Plants

Nature All Around: Bugs

Nature All Around: Trees