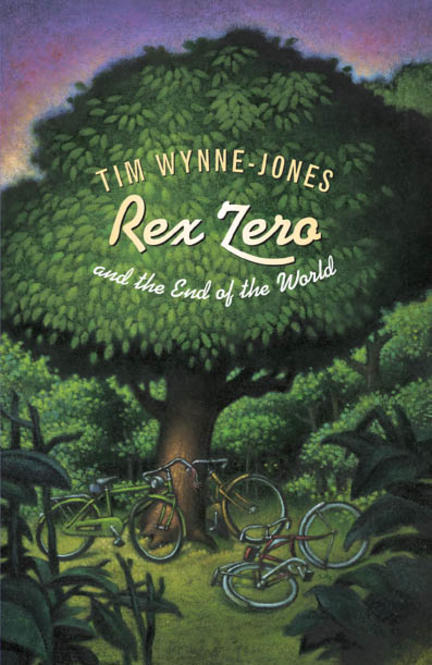 It's the summer of 1962, and to twelve-year-old Rex the world is starting to look like a pretty scary place. On TV there are reports about the Russians and a nuclear war. Some people in his new neighborhood are even building bomb shelters in their backyards. Rex learns that there's trouble closer to home as well. A black panther has escaped from a zoo and he and his friends are sure they have spotted the creature in their local park -- and it is Rex who comes up with a plan to trap it.

In this smart, vivid and touching novel, Tim Wynne-Jones explores the time and place of his own childhood when a kid could spend an entire summer below the radar of adults. But it was also a time of great uncertainty and menace, when memories of an old war were still fresh, and fears of a new one were looming.

Tim Wynne-Jones is in top form in this novel...

Wynne-Jones does a masterful job capturing the time period in a novel that will not only appeal to boys today, but to their uncles and grandfathers as well.

Despite the weighty themes, Wynne-Jones writes with a light, often humorous touch and maintains a perspective true to an 11-year-old's perspective...This winning hero paints a universe both hopeful and realistic, one that readers may well want to visit.

...an unusual and appealing title....the memorable characters and the animal mystery will keep the pages turning.

Wynne-Jones' funny and largely autobiographical novel is filled with local color, 1960s references, and a decidedly Canadian look at the cold war.

The present-tense narrative is brilliant in its near stream-of-consciousness depiction of the world as Rex sees it...The meticulous plotting sets the enormity of world destruction against the equally cataclysmic concerns of childhood, all magnified through the lens of Rex's vivid imagination. It's a historic narrative that resonates eerily and effectively today.

...hilarious...Rex's family and friends are an amazing crew of appealing and intriguing characters...This novel will appeal to young readers who enjoy humour and learning about Canadian history.

[Wynne-Jones] has totally captured this particular historical moment...and, through the enthralling narrative voice he's created, made it truly come alive to contemporary readers. A character who will utterly enchant readers, Rex Zero is funny (without always realizing how hilarious he is), creative, imaginative, inventive, and exasperating - everything you'd expect of a 10-year-old trying to negotiate his way through a world he doesn't always understand.

[Rex Zero] is a delightful novel with arresting characters, written for a readership that will find touchstones of its own.

Rex Zero and the End of the World

Summertime can be lonely when you are the new kid in town. So thinks Rex Norton-Norton who, along with his quirky family, has just moved to Ottawa from their most recent home in Vancouver. At first it seems like there are absolutely no other children his age to be found. Finally, however, he does connect with a couple of boys. As he finds himself accepted into their small circle of friends, he becomes fascinated with the group’s common goal: to prove to the grown-ups that a very dangerous, escaped panther is lurking in Adams Park.

While the Cold War intensifies and the news reports of events in the great wide world are increasingly grim, Rex and his new cronies are united in their resolve to reveal the panther’s existence. Ultimately it is Rex himself who comes up with the idea to catch the creature and devises the plan to do just that!

Set in the early 1960s, Wynne-Jones’ latest novel is nostalgic, witty and wise. Rex is an utterly endearing, exceedingly droll protagonist with a screamingly funny family. Told from the point of view of young Rex, this book manages to brilliantly evoke the uncertainty and tension that pervaded people’s lives during those years – poignantly illustrating what it felt like to be a child at that time, trying to make sense of a seemingly incomprehensible world. Bomb shelters, Communist spies and the Cuban Missile Crisis were realities that played on the minds of children and adults alike. And yet, for all the dread and fear of a nuclear war, there were still the everyday concerns to contend with. Things like starting a new school and making new friends. And like solving the mystery of the big, black beast lurking in the bushes of Adam Park!

H Rex Zero and the End of the World

Summer, 1962: The world looks scary to Rex, and there’s trouble closer to home too. In this work of fiction, the awardwinning author explores the time and place of his own childhood.